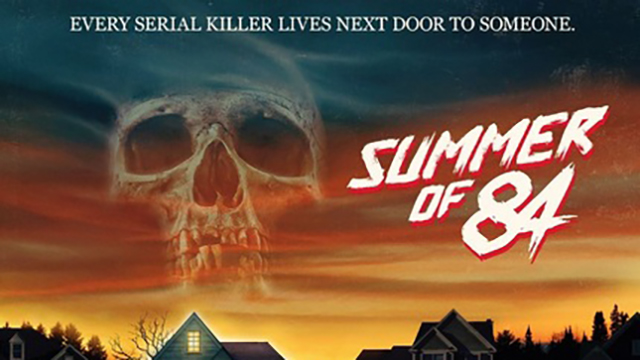 A few years ago, a bunch of insane Canadians got together for Turbo Kid, a loving and totally rad send up cheap, schlocky post-apocalyptic movies like The New Barbarians, 1990: The Bronx Warriors, and the slew of similar Mad Max knock-offs that permeated the 1980s. Now that same team is back and working on a horror slasher called Summer of ‘84, and I’m pretty damn psyched.

According to Screen Daily, RKSS (also known as Roadkill Superstar)—a team comprised of directors François Simard, Anouk Whissell, and Yoann-Karl Whissell—has teamed up with Gunpowder & Sky and Brightlight Pictures to bring Summer of ‘84 to the screen. The script from Matt Leslie and Stephen J. Smith wound up on the 2016 “Blood List,” a collection of the best horror screenplays floating around—think of it like a genre-specific “Black List.”

Here’s a synopsis, which sounds right up my alley:

Growing up on a quiet cul-de-sac in Ipswich, Massachusetts, Davey’s desperate to believe there’s more to life than what he sees from his bedroom window. For him, every tabloid cover is a peek into the world as it really is, as it really must be past the borders of the humdrum neighborhood where he and his best friends Eats, Farraday, and Woody have grown up. Sure they spend their summers playing nighttime flashlight tag (“Manhunt”), riding their BMX bikes all over town, and spying on the hot, sometimes topless chick next door, Nikki… but Davey thirsts for more. As their investigation heats up, Davey and his best buds soon discover Mr. Mackey is on to them, and their suspicions quickly become all too real.

From this description, Summer of ‘84 sounds like perfect fodder for this team, though the vibe seems a less campy and over-the-top than their last venture. I can’t help but think of a less supernatural It or Stranger Things when I read this description, but we’ll have to wait and see.

As this was just announced and everyone is excited by the possibilities, people have lots of nice things to say to hype up the project. RKSS says:

“We were passionate about Summer of ‘84 since the very first pitch. Our team fell in love with the script and felt like it was written just for us. There was no doubt in our mind that we needed to get attached to this amazing project and work with the talented writers who imagined it all.”

“Summer of ‘84 taps into the curiosity we all had as kids about what goes on behind closed doors.”

While his partner in crime, Leslie, adds:

“While writing, we tried to evoke the feeling of a genuine 80s film – but give it a contemporary twist. We hope audiences find Summer of ‘84 dangerous and haunting, as well as nostalgic and sincere.”

“How could we not bet on a writer associated with Straight Outta Compton [Ed: Leslie worked on that film]and the directors of Turbo Kid to tell a twisted tale about a peaceful community where a serial killer threatens to shatter the suburban dream? It’s a bold, unexpected story told by breakthrough filmmakers, and it’s exactly the kind of novel film we want to make at Gunpowder & Sky.”

You didn’t really expect them to come out of the gate trashing the project or expressing skepticism, did you?

Summer of ‘84 has a July start of production scheduled with and eye on an end-of-the-year release. The casting process will probably get underway shortly, and you can bet I’m keeping a close watch on this one.
Posted by Brent McKnight at 8:40 AM