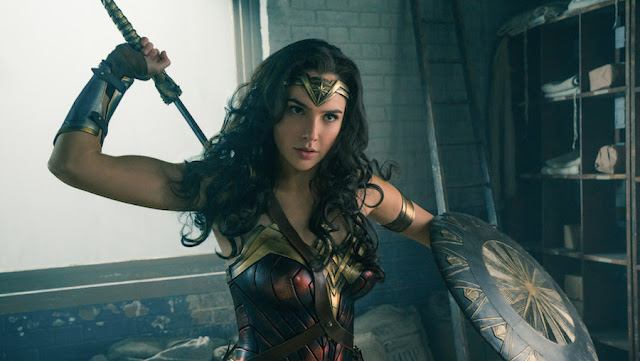 Here’s the bad news: Wonder Woman is a flawed superhero origin story. Now that we have that out of the way, the good news is that it’s mostly awesome, finally brings one of the greatest comic book characters ever to the big screen after more than 75 years, breaks up just a little bit of the boys’ club that is contemporary superhero movies, and is easily the best thing the DC Extended Universe has produced thus far.

One of the complaints most often levelled against previous DC movies, especially Batman v Superman: Dawn of Justice and Man of Steel, is that they wallow in doom and gloom; a wash of various shades of grey and shadows—both visually and thematically. In the hands of director Patty Jenkins (Monster), Wonder Woman takes a different tack. It’s hopeful, joyous, and all about love and finding the best in people; and fun in a way that no other DC movie has been yet. 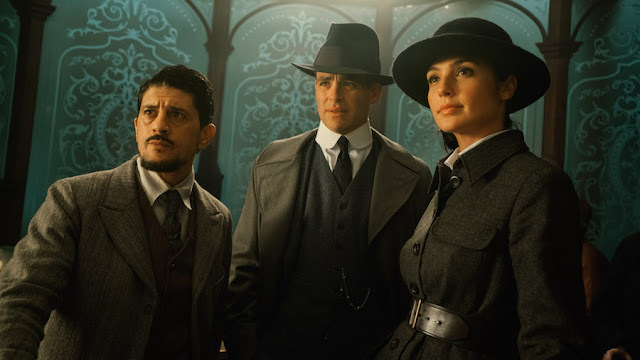 Instead of the oppressive darkness of Gotham City, or even this bummer iteration of Metropolis, Wonder Woman’s home of Themyscira is a lush, gorgeous island where everything is (gasp), bright and beautiful and well lit. Even during scenes set in the gritty trenches of World War I and the barren no-man’s land between British and German lines, it never becomes murky or bogs down in monochromatic haze. It easily could have, and we’ve seen it happen often in this particular shared movie universe.

With a clunky Proustian frame story that’s unnecessary in every way except to provide a spurious link to the larger DCEU, Wonder Woman traces Diana, Princess of Themyscira, home of the Amazons, daughter of Hippolyta (Connie Nielson) and Zeus, from childhood as she grows a young woman (played by Fast & Furious’ Gal Gadot) destined for greatness. When the dashing pilot/spy Steve Trevor (Star Trek's Chris Pine) crashes off shore, the world of men and the War to End All Wars come knocking. The Amazons can no longer stay isolated, and Diana cannot do nothing and must venture forth to find and kill Ares, the God of War, once and for all. She doesn’t even view it as a choice. 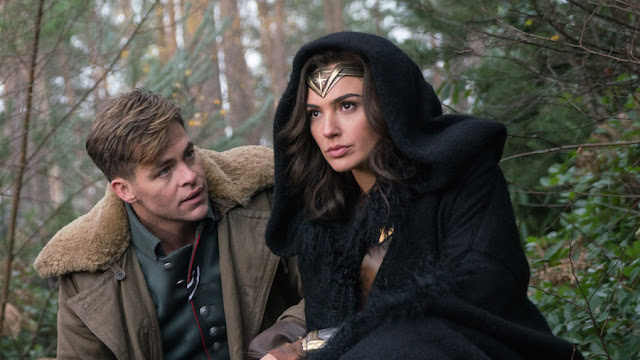 Wonder Woman’s greatest strengths lie these early scenes and when Diana accompanies Steve to London of the nineteen-teens. A fish-out-of-water scenario, Gadot and Pine have an easy chemistry, and Jenkins uses Diana’s outsider perspective to created a wide-eyed awe at the horror or war and illustrate the absurdities of an exclusionary culture. Gadot captures this innocence without coming across as naïve. She has a power as well as a vulnerability, and this allows her to grow and develop over the course of the movie as she learns who she truly is.

In the comics, Steve Trevor is often portrayed as as a male damsel-in-distress that Diana must save from peril. Thankfully, Wonder Woman mostly avoids such an easy swapping of traditional cinematic gender roles. This isn’t a case where a female character is written essentially as a man. Steve is brave and capable in his own right—and Pine is straight up delightful; I’d watch movies about his war-time espionage exploits any day. 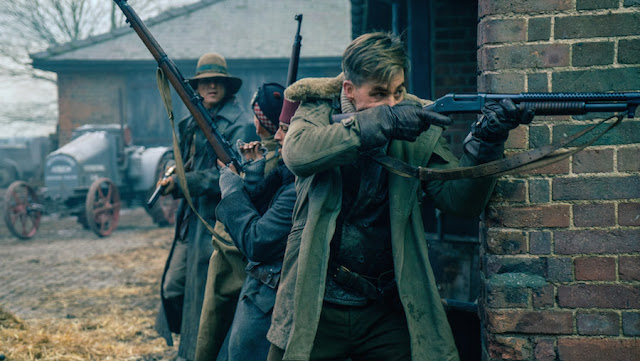 Diana is simply braver and more capable. She’s not merely a badass who kicks ass just as well as the boys; she’s caring and compassionate, full of hope, and wholly unconcerned with outdoing the men. So many female-fronted action movies feel the need to play in that sandbox. But Diana doesn’t measure herself against the men—she doesn’t need to and she knows it, she has her own purpose. Strength doesn’t always mean kicking the crap out of people, and as a result, she’s a different kind of movie heroine that we’re used to.

Wonder Woman has moments that legitimately give me chills—the first time Diana goes into battle in full WW regalia—and scenes of high adventure pepper the movie. But dodgy CGI proves an Achilles heel. While there are fantastic fight scenes—Diana taking apart a room full of German soldiers springs to mind—others wind up looking like unfinished video game cut scenes. The more intimate, contained combat is fine—even if they do too often give into the ubiquitous slow motion impulses DC loves so much (seriously, they must have a studio-mandated quota)—but when Wonder Woman flips around wide-angle shots, whipping the Lasso of Truth at throngs of faceless goons, it doesn’t look great. 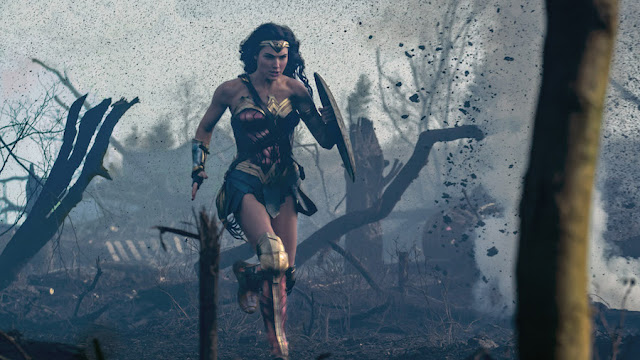 This becomes a bigger issue in the final act, which is where Wonder Woman comes off the rails. It devolves into a more generic “superhero movie climax” and falls back on the dim, poorly lit aesthetic BvS favors. It’s extra jarring because the film takes pains to avoid that and set itself apart. And, after a none-too-subtle reveal, the big-boss battle is little more than two powerful characters taking turns lobbing powerful volleys at one another and yammering back and forth.

In general, Wonder Woman suffers from that common plight of superhero movies—both Marvel and DC—in that the villains aren’t worth a damn. There’s Danny Huston’s General Erich Ludendorff, a stock, hard-pounding German military man; and Elena Anaya’s Dr. Maru, AKA “Dr. Poison,” a generically evil chemist with a hard-on for killing people with gas. But she has a creepy mask or whatever. 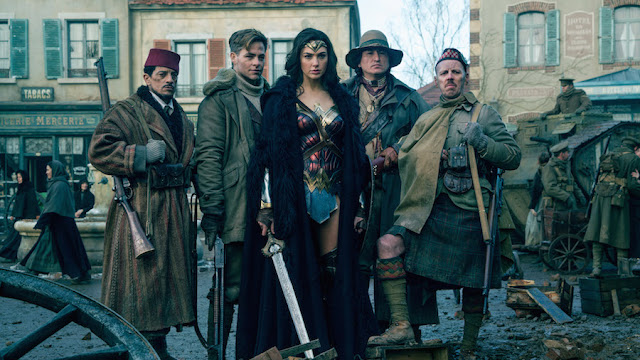 More than an individual antagonist, Diana goes up against the idea of war. Less a concrete character, Ares chiefly provides a looming presence, standing in for humanity’s darker impulses. Wonder Woman does a decent job of showing the brutality of war and the cost of such sweeping conflict, but it can only go so far. This isn’t Saving Private Ryan. We’re talking about bloodless PG-13 action where even grisly, disfiguring war wounds are clean and tide. And I’m just saying, if you stab a dude through the heart with a sword, the blade does not come out the other side clean.

Wonder Woman has a lot to contend with. It’s responsible for bringing one of the most popular comic book characters of all time to life for the first time on the silver screen, a Herculean task on its own. Add to that the pressure of being one of the first female-fronted superhero movie (I like to pretend Catwoman and Elektra don’t exist, and though Jessica Jones is dope, it's not a movie), not to mention it’s a huge studio tentpole directed by a woman, an all-too-rare artifact. With a $160 million budget, it’s the most expensive movie ever helmed by a woman, eclipsing the $100 million budget of Kathryn Bigelow’s K-19: The Widowmaker all the way back in 2002. There are many interested eyes watching this, and just as many agendas. Some want to hold the film up as a paragon of progress; others want it to fall flat on its face. 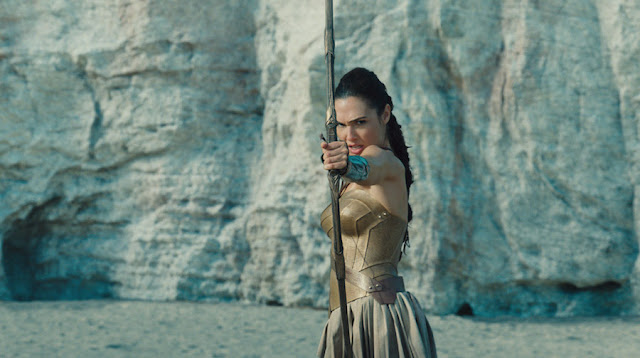 Is this fair? No. But even with all the added scrutiny, Patty Jenkins largely delivers. Wonder Woman isn’t a perfect movie; it’s not even a great movie. But whatever flaws it has, the upside overshadows them all. It’s idealistic, earnest, and hopeful in a way most superhero movies aren’t—especially the overly cynical DC films of late.

I doubt it necessarily signifies continuing progress for female filmmakers in Hollywood or representation in movies, or that it signals any sort of changing tide as far as industry inequality goes. Still, Wonder Woman—both the movie and the character—feels pressing and urgent and vital at this specific moment in time, and that’s worth reveling in. [Grade: B]