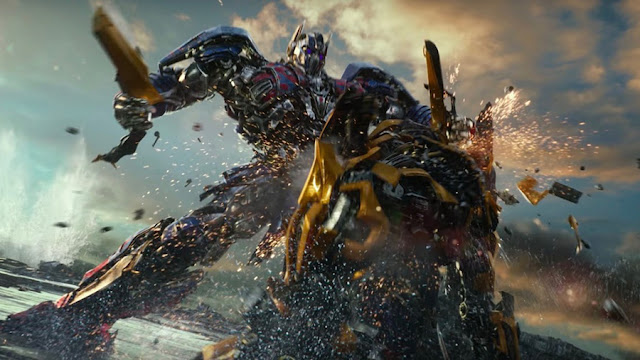 Let’s be frank. At this point, five movies of Michael Bay-directed robotic mayhem into the franchise, most potential moviegoers don’t need me or anyone else to tell them whether or not to see Transformers: The Last Knight. As the last two installments both topped the billion-dollar mark at the global box office—the first has the smallest take at $709 million—this may well be the most “critic proof” franchise in all of franchise-dom. It basically prints money regardless of brutal reviews. And when this one dominates the box office, it’s sure to be the latest bullet in the studio’s “movie critics don’t matter” gun. (Despite earlier this summer when they placed the blame for the underperforming Baywatch and Pirates of the Caribbean: Johnny Depp Earns a Paycheck squarely at the feet of those fun-hating critics they didn’t make the movies for anyway.)

Admittedly, I’m not a big Transformers fan; I just want to get that out of the way up front. Though I’m a huge Michael Bay apologist—Bad Boys 2 is a damn action masterpiece—his brand of hot robot-on-robot bedlam has never done it for me. And no, Transformers: The Last Knight is not the one to win me over. 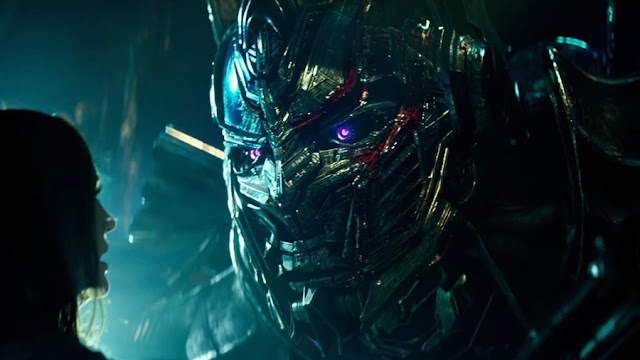 In my notes, I scribbled the description, “Asshole fever dream,” and that’s not entirely inaccurate. It’s complete and utter nonsense—flashes of inspired nonsense, though the bulk is just run-of-the-mill nonsense nonsense. And for a movie where the plot remains largely inconsequential, The Last Knight has an insane amount of it. There are jagged shards of like three different movies wrapped up in this senseless cloud of gibberish.

We learn right away Transformers have been on Earth since the Dark Ages, teaming up with King Arthur and Merlin, because one insane King Arthur movie this year wasn’t enough. Mark Wahlberg’s Cade Yeager returns to run around a post-apocalyptic junkyard fighting the good fight. An entire planet steams across space on a collision course with Earth. Optimus Prime takes a Fate of the Furious-style heel-turn. And there’s a 14-year-old girl (Isabela Moner) for Bay to sexualize. But don’t worry, there’s also a polo-playing Megan Fox clone (Laura Haddock) history professor for his camera to ogle. To recount the plot would take all day, just know the movie spends the first hour or so setting up one story, only to completely abandon it for something else. 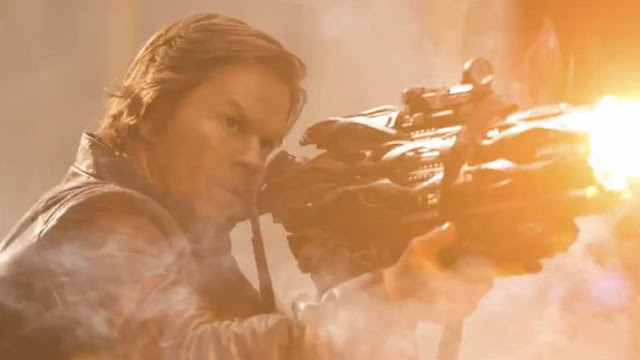 Transformers: The Last Knight screened on a Monday, opens on a Wednesday, and according to reports, didn’t lock in the final cut until the Saturday just prior. And boy howdy, does this haste show. With three writers (and multiple “story by” credits), there’s no care given to continuity, flow, or coherence. To call it disjointed is being kind.

From one scene to the next, it always feels like there's something important missing, like you went to pee and skipped a significant reveal. How do they know certain information? How did they get from one place to the next? At one point, Haddock completely changes outfits in the time it takes Wahlberg to walk through a doorway. Or a convoy pulls out of Chicago and arrives in South Dakota minutes later. There’s simply no effort or importance placed on editing or construction. The impression left is that no one involved cares, and it feels like a giant middle finger to the audience. 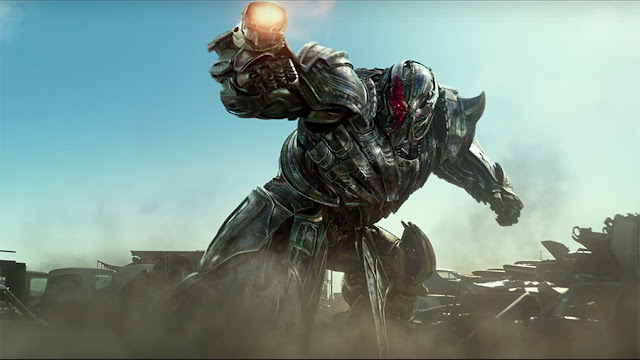 As chaotic as Bay’s frenetic visual style is, his action scenes are usually at least meticulous and mechanically well put together. This time out, however, everything jumbles into a gloppy mess. In the big set pieces, Autobots, Decepticons, and multiple military factions battle back and forth, and it’s impossible to discern one from the other. With little transition, the film flips from characters standing still in a museum, to the middle of a frantic car chase through London with villains in hot pursuit, to calmly wandering around a shipyard as if they’re not being hunted. Even in smaller moments, the film maintains no flow. In one sequence of shots, Jerrod Carmichael’s comic relief side character, Jimmy, goes from sitting to standing to falling to running in successive rapid edits in a way that’s not even fundamentally sound.

When things heat up, The Last Knight devolves into sloppy filmmaking, which is not Bay’s style. He thrives on pandemonium, but it’s controlled, orchestrated pandemonium. Reportedly, The Last Knight represents his final foray into the Transformers universe—we’ve heard that before, so we’ll wait to see. But witnessing what unfolds on screen, that makes sense. It watches like the work of a filmmaker who doesn’t want to be there, who has one foot out the door. 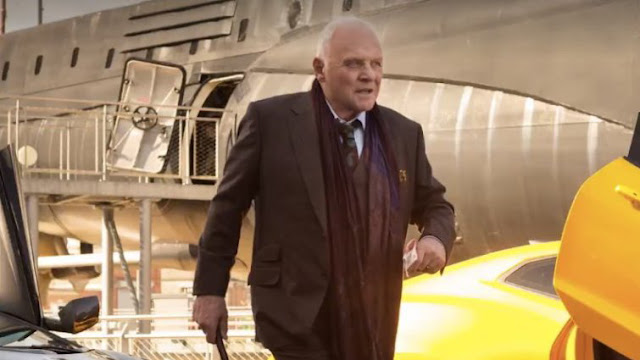 For a movie that hinges so heavily on action, The Last Knight regularly slows down for turgid stretches of over expository dialogue where characters manifest convenient nuggets of information out of thin air. As tedious, drawn out, and boring as these scenes become, they do provide the high point of the entire movie, and that’s Anthony Hopkins.

Sure, we all know he’s only there to class up the joint and pad his bank account, but he has too damn much fun. His Sir Edmund Burton is a loopy old British noble, exposition machine, and secret protector of the history of Transformers. (Who knew these giant robots were present at all the major moments of human history over the last thousand-plus years? He did.) Hopkins knows he’s neck-deep in shit, but that’s not going to stop him from rambling on about robot dementia or bantering with his unhinged ninja robot butler (not kidding) Cogman. It’s all kind of delightful. 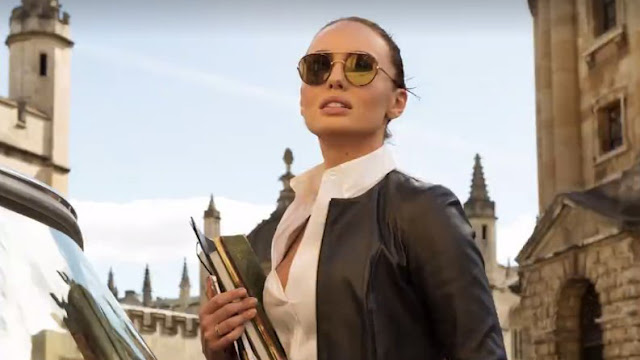 I already mentioned things like the robot ninja butler and Transformers in the middle ages (in the form of a flying, three-headed robo-dragon, btw), but The Last Knight overflows with weird shit that will make you cock your head like a confused dog. Like a metal amulet that slithers all over Mark Wahlberg’s abs. Or a robot playing hacky sack on the beach in Cuba. Or submarines diving into what’s best described as a giant alien butthole. (I can't help but think, “What’s long and hard and full of semen?”) Come to think of it, is that last one really a surprise? After all, this is a franchise that has giant swinging robot balls in part two, so nothing’s shocking anymore.

Nothing I say here actually matters. Audiences know what to expect from the franchise, and Transformers: The Last Knight doesn’t deviate much from that. People who like these films will go see it; those who don’t, won’t. My opinion means very little. Still, that doesn’t stop the movie from being unambitious (it’s yet another studio tentpole that features a hovering lighting witch), leaning on a running anti-intellectual streak (one guy explains “math” only to see his math fail in favor of “magic”), wallowing in terrible storytelling, and becoming the cinematic equivalent of a crowd chanting U-S-A, U-S-A! Who even gives a shit anymore? It certainly appears Michael Bay doesn’t.

Posted by Brent McKnight at 4:00 PM