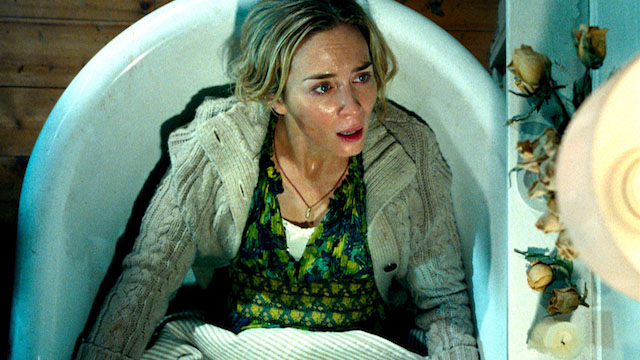 Parenting is hard. Especially when even the slightest noise attracts the unwanted attention of a toothy, angry, altogether terrifying creature that will then rip the entrails from both you and your spawn.

That’s the general conceit of the new horror movie, A Quiet Place, from director John Krasinski. Yes, the inoffensively handsome smart aleck from The Office has ventured into the horror realm and, while I’m not as in love with his first genre offering as many others, it’s effective, thrilling, and at times unbearably tense. This marks his third foray behind the camera, but if he wants to hang around the horror kids—we’re the ones wearing black and smoking in by the dumpsters—I’m game to keep watching. 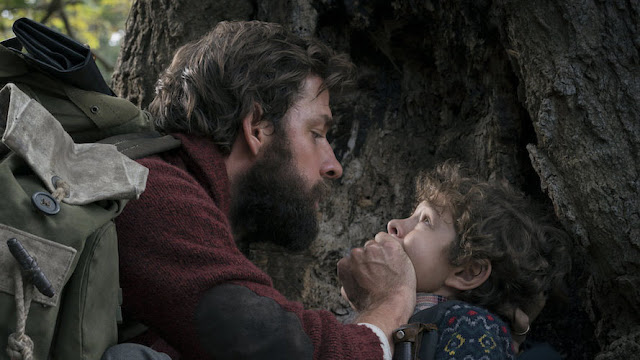 It takes a certain swagger to make a near-silent film, one with almost no dialogue; seven cast members, one of whom plays an uncredited corpse; and to turn it all into a horror-driven meditation on the angst of parenthood, guilt, and survival. One that also watches as a metaphor for censorship. But here we are. And it works.

The plot picks up in the wake of some sort of apocalyptic event—no story that starts with a title card reading, “Day XX,” ever goes well. A family—a father (Krasinski), mother (his real-life wife, Emily Blunt), daughter (Millicent Simmonds, Wonderstruck), and son (Noah Jupe, Suburbicon)—live on a remote farm, coping with an unimaginable trauma. And monsters. And a pregnancy. They have a lot on their plates. 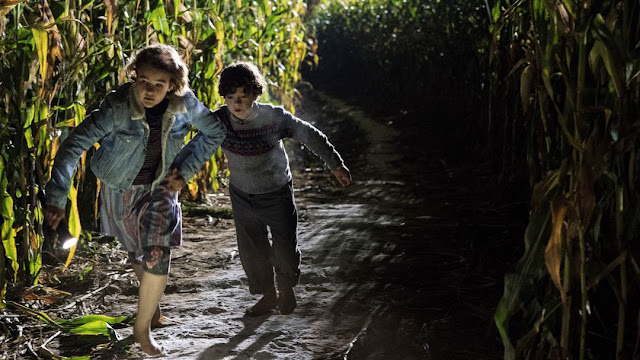 This silence is both literal and metaphorical. In multiple senses. The daughter—the characters technically all have credited names, though they’re never explicitly mentioned—is deaf, so this new quiet is really just her world, the one she already knew. (Simmonds, the young actress, is actually deaf in real life.) They can’t speak—they use sign language—for fear of attracting the creatures. And even if they could, everyone’s turned inward to contend with what happens in the banger of an opening scene. In reality, A Quiet Place is a family drama about loss, grief, culpability, and blame. It just so happens that it takes place in a world besieged by monsters.

The script from Krasinski, Bryan Woods, and Scott Beck, dovetails the family drama nicely into the horror trappings. Thematic elements play off of and enhance one another. Standard parental protective instincts are always important, but more immediately so when there are literal monsters lurking in the dark. Esoteric horrors, like losing a loved one, blend with concrete terror in the form of hideous beasts. Anxiety and fear are normal parts bringing a child into the world, sensations heightened by the fact that an ill-timed crying baby not only causes a lack of sleep but imminent death for all around—the pregnancy basically functions like ticking clock. Krasinski and company use the genre forms to amplify the familial issues at the same time the dramatic elements accentuate and ratchet up the horrific. 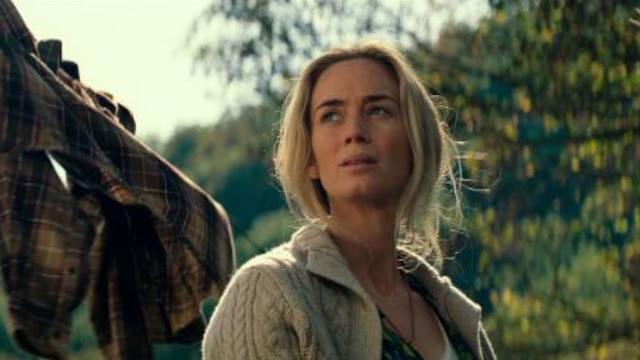 One challenge A Quiet Place faces is world building. There’s not a ton of background—we assume the creatures are alien, but it’s never 100% clear. No talking means no exposition in dialogue form. It doesn’t do deliver a ton of details or history, but offers just enough to set the stage and get things moving.

Some of these efforts are admittedly clunky, like newspaper headlines that declare, “It’s Sound!” But it also contains clever touches, flourishes that feel like real things you can imagine doing in the same situation. Much of what they do they obviously learned by trial and error problem solving and using what they have available. The family goes barefoot to avoid heavy clunking of shoes. They pour trails of sand along commonly used routes to dampen their footsteps. On the wooden floors of their ancient farmhouse, they mark all of the spots that don’t creak. Subtle details like these sell the world and drive home its authenticity. 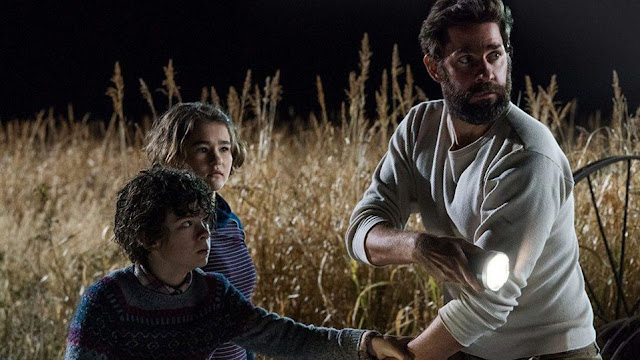 A Quiet Place uses its sparse nature to it’s advantage. It drops viewers into this situation and forces us to learn the rules. Where these creatures come from and why they do what they do isn’t important. Nor is where the story takes place; it could be anywhere. What matters is right here, right now, and how the characters cope. This creates an immediacy and an intimacy between the audience and what’s on screen. As the filmmakers crank up the tension, you sit there in the theater, clenched and holding your breath. You don’t want to be the one to make a noise.

With no dialogue—and even the signing is relatively limited—it’s up to cast to find other ways to communicate, and do they ever. Krasinski has branched out since The Office, but he’s never been as raw and exposed as he is here. Blunt conveys an insane array of emotions—fear and grief, hope and optimism, and everything in between—without saying a word. Even the kids are fantastic. She’s a tween brat and he’s a little wiener, but they both contain much more depth. Each has their own way of dealing with lingering wounds, living in constant fear, and surviving creeping guilt and remorse. It's remarkable, without words, how much we come to care about this family. 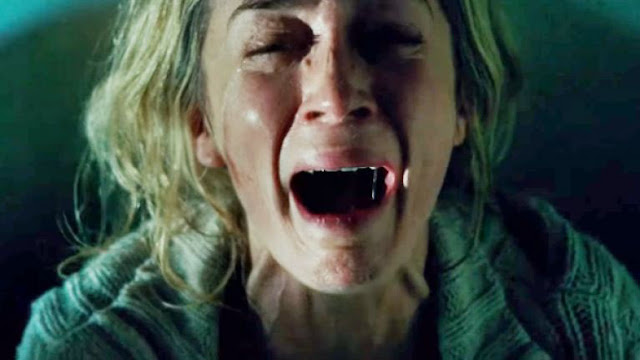 Everyone totally commits to the silence—are there a dozen spoken lines? 20? I don’t know, but it’s not much. Even in moments of relative normalcy, this adds an unsettling edge. There’s no absent humming as a character does chores. No one hollers a greeting as they return home. The threat looms over every moment and the weight is palpable. 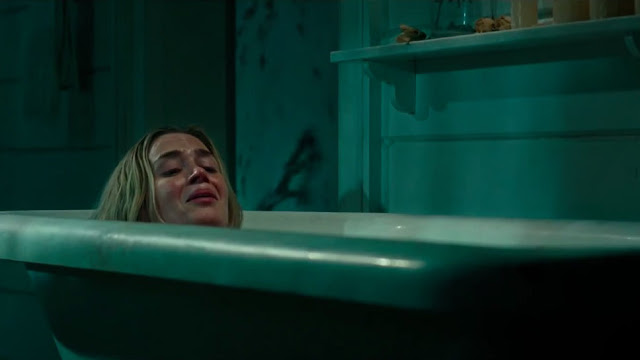 In most instances, it’s easy to spot the mechanics of A Quiet Place; the script broadcasts things early on and there’s not much in the way of surprise. That doesn’t necessarily lessen the impact, and Krasinski doesn’t pull any punches as far as grim turns go. But as with many films that hang their hat on a specific conceit, there are moments when it pushes the bounds of credulity—think every time you exclaim, “Why are they still filming?” during a found footage movie.

In a larger sense, these are minor quibbles. A Quiet Place begins and ends on masterful notes, the cool concept mostly delivers, the tension never lets up, the actors all work at high levels, it’s gorgeous to look at, and every element wraps into a tight horror ball. The fact that it’s about coping with things far scarier than freaky monsters, makes it that much more terrifying. Not without certain flaws, this is sure to stand as one of the best horror movies of the year, which in my book means one best movies of the year, period. And if John Krasinski wants to hang out in the horror hallways a while longer, we can do much worse. [Grade: B+]

Posted by Brent McKnight at 8:40 AM