This 'Solo: A Star Wars Story' Trailer Assumes Everyone Will Betray You 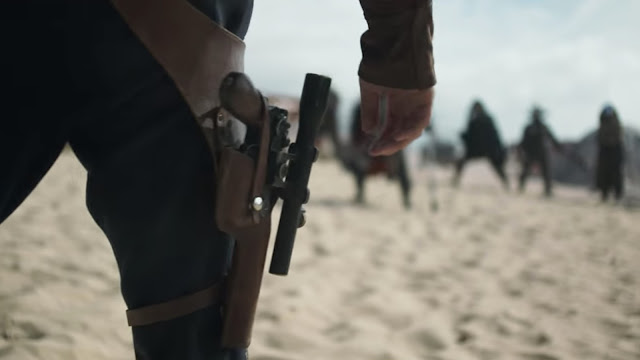 When Lucasfilm first announced the Star WarsStory movies, I was down with the idea of standalone films that examine heretofore unexplored corners of that far, far away galaxy. There’s so much room to move and so many stories to tell, not just the tale of the Skywalker clan, their crew, and the Jedi. I’m not as into the idea of using them to rehash characters we already know (I sure as hell don’t want a Boba Fett movie). But despite what I want, we’re getting Solo: A Star Wars Story next month. And there’s another new trailer.

Obviously, I have mixed feelings about Solo: A Star Wars Story. It feels like the wrong time, especially as Harrison Ford is still alive and played the character just a few years ago. It’s going to be difficult if not impossible for audiences to differentiate the new, young Han from the iconic character many of us grew up with. It doesn’t help that, from what we’ve seen, though he looks the part, Alden Ehrenreich has all the charisma and swagger of a walking cantaloupe. (I’m also basing this on previous performances, which haven’t been impressive.)

All of the rumors and reports of on-set trouble haven’t done much to set me at ease, either. There are the big, confirmed moves, like the firing of original directors Phil Lord and Chris Miller, who Ron Howard replaced. And major reshoots that excised characters like the one played by Michael K. Williams and, according to some accounts, were as much as 50% of the movie.

But at the same time, this new Solo trailer looks like a decent amount of fun. I dig the deep space western heist vibe. Donald Glover’s young Lando Calirssian looks like a blast and continues to be the main reason I’m excited for this movie. It has a great cast, including Emilia Clarke, Phoebe Waller-Bridge, Thandie Newton, Woody Harrelson, and, of course, Chewbacca.

Basically, I have no idea whether this will be any good or not. No one does. And as unnecessary as it is, I’m going to watch it. That’s not a stretch, even with this recent glut, you slap the name Star Wars on anything and I’ll watch. I’m an easy sell. I just want them all to be good.

Here’s a synopsis, if you care about that sort of thing:

Board the Millennium Falcon and journey to a galaxy far, far away in “Solo: A Star Wars Story,” an all-new adventure with the most beloved scoundrel in the galaxy. Through a series of daring escapades deep within a dark and dangerous criminal underworld, Han Solo meets his mighty future copilot Chewbacca and encounters the notorious gambler Lando Calrissian, in a journey that will set the course of one of the Star Wars saga’s most unlikely heroes.

Solo: A Star Wars Story premieres at the Cannes Film Festival in May, because why not, I guess. The rest of us get our first look at the early days of our favorite scruffy looking nerf herder on May 25.
Posted by Brent McKnight at 8:19 AM