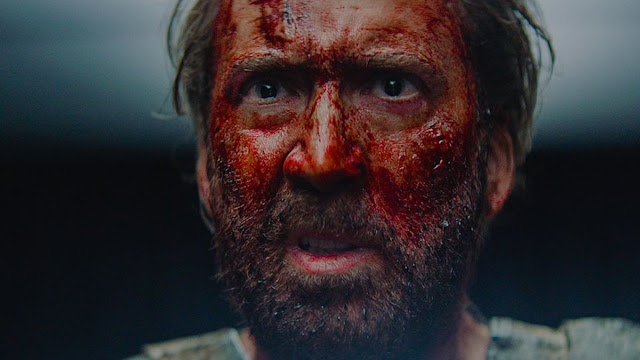 Nicolas Cage is a madman who has made some wild movies. Last year he battled cultish demon bikers (Mandy), smashed a pool table with a sledgehammer while screaming “The Hokey Pokey” (Mom and Dad), and played a trucker who’s girlfriend’s daughter is possessed by the spirit of his dead wife (Between Worlds). And that was just 2018. But the Academy Award-winning actor recently said his upcoming team up with fellow cinematic lunatic, Sion Sono (Tag), Prisoners of the Ghostland, the craziest movie he’s ever made, and that’s music to my ears.

Cage recently appeared at the Third International Film Festival and Awards Macau where he gave a masterclass, which I’m sure was something to behold. During this time, the subject of Prisoners of the Ghostland came up and he said (Via Screen Anarchy):

“I’m thrilled about it! It’s unlike anything I’ve ever read before. It might be the wildest movie I’ve ever made, and that’s saying something. It’s out there. I wear a skintight black leather jumpsuit with grenades attached to different body parts, and if I don’t rescue the governor’s daughter from this state line where they’re all ghosts and bring her back they’re gonna blow me up. It’s just crazy. It’s way out there.”

Reading that I feel like that woman in a rom-com accepting a wedding proposal and shouting, “Yes, yes, a thousand times yes!” I mean, come on, Nic Cage in a full-body leather suit with explosives strapped to him rescuing a woman from ghosts. What about that doesn’t sound amazing?

The very idea of Cage and Sion Sono—the maniac behind Why Don’t You Play in Hell?, Suicide Club, and many more—teaming up for the director’s English-language debut hooked me immediately. I love Sono, and no joke, I think Nicolas Cage’s turn in Mandy is the best of 2018 (and I voted for it as such in both of the film critic groups I belong to). It’s just a raw, open wound of a performance.

The original report about the project describes the plot as:

[C]enters on notorious criminal Hero (Cage) who is sent to rescue an abducted girl who has disappeared into a dark supernatural universe. They must break the evil curse that binds them and escape the mysterious revenants that rule the Ghostland, an East-meets-West vortex of beauty and violence.

Prisoners of the Ghostland will reportedly film this spring and hopefully, fingers crossed, we will see it in 2019. It’s easily one of my most anticipated movies of the coming year.
Posted by Brent McKnight at 9:54 AM