This 'Godzilla: King Of The Monsters' Trailer Is Mostly Monsters 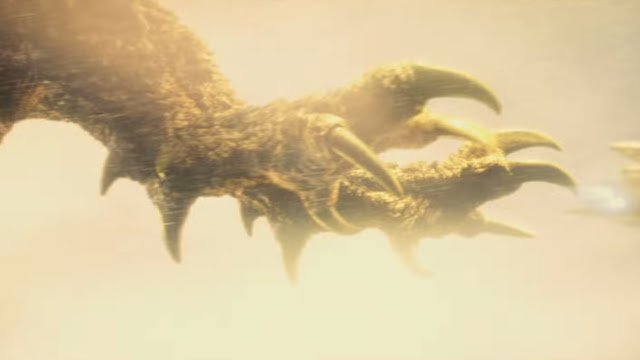 The biggest problem with Gareth Edwards’ 2014 Godzilla reboot is that it eschews the titular monster in favor or lackluster (read: whack-as-hell) human characters. Sorry, no one wants to see Aaron Taylor-Johnson wooden act his way through scene after scene when we could be hanging out with the King of the Monsters. Before he tussles with King Kong, Godzilla gets another solo joint courtesy of Krampus director Michael Dougherty. Judging from this new Godzilla: King of the Monsters trailer, this movie rectifies the woeful lack of monsters in a big way.

There’s some backstory about how these monsters are a system of checks and balances created by mother earth or some such nonsense, but I don’t particularly care about that. All I want is to see Godzilla, Mothra, Rodan, and King Ghidorah, and that’s what we get. Hell, I think we get more monster action in this Godzilla: King of the Monsters trailer than we do in the entirety of Godzilla. I didn’t break out the stop watch, but it has to be close.

Here’s a synopsis that drives home the existence of a shared monster universe, because everything is a shared universe whether you want it to be or not:

Following the global success of “Godzilla” and “Kong: Skull Island” comes the next chapter in Warner Bros. Pictures’ and Legendary Pictures’ cinematic MonsterVerse, an epic action adventure that pits Godzilla against some of the most popular monsters in pop culture history. The new story follows the heroic efforts of the crypto-zoological agency Monarch as its members face off against a battery of god-sized monsters, including the mighty Godzilla, who collides with Mothra, Rodan, and his ultimate nemesis, the three-headed King Ghidorah. When these ancient super-species—thought to be mere myths—rise again, they all vie for supremacy, leaving humanity’s very existence hanging in the balance.