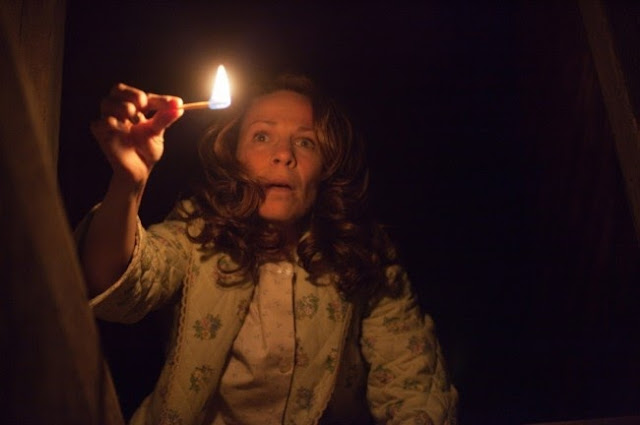 James Wan may be most known as the writer and director of “Saw,” and for being responsible for the assault of questionable “torture porn” movies that franchise helped launch. Lately, however, he has eschewed over the top gore and elaborate ways to kill people for a spooky, less gore-soaked style of horror, like “Insidious” and “Dead Silent.” These movies atmosphere, escalating tension, and jump scares over blood and guts and violence. And Wan’s latest, “The Conjuring,” takes pages from two of our favorite subgenres—the haunted house and the exorcism—and combines them to great effect to tell a purportedly true tale of real life terror.

Not only is “The Conjuring” set in the 1970s, it’s also a stylistic and thematic throwback to that era. From a sparse, monochromatic logo to the spot on era-appropriate fashion sense, this definitely harkens back to the time of grindhouses and drive-in double features. Even the way Wan shoots his film is retro. The camera rarely stops moving, and the frame is rarely still. Overall the approach calls mind what Robert Altman did in “The Long Goodbye” in 1973, with lots of pushing and pulling, tons of long takes that almost soar through hallways and between rooms. While not quite as consistent at Altman—things dial down as the film progresses—this tactic creates a gut response and places you in a precarious position. You’re already a touch off kilter, which only serves to enhance the sense of unease the film establishes from the outset.

I don’t know how many times horror, as a genre, will show us this before we finally learn our lesson, but if you find a beautiful, too-perfect house for way less than you should be paying for it, there is something horribly wrong with it. You may not notice it right out of the gate, but you will. It’ll be infested with some hungry creature, be the site of a horrific unsolved murder, or, in the case of “The Conjuring,” haunted. When the Perron Family moves into their new country home, it doesn’t take long before their elated state takes a sinister turn. Mother Carolyn (Lili Taylor) wakes up covered in mysterious bruises, and they discover a hidden basement full of creepy old furniture and an out of tune piano. One daughter starts sleepwalking; one feels a hand grab her leg as she sleeps; and the youngest makes a new friend named Rory, who only she can see, and who she met because he lives in the mirror of a creepy music box found near a giant, gnarled tree that would be perfect for hanging. 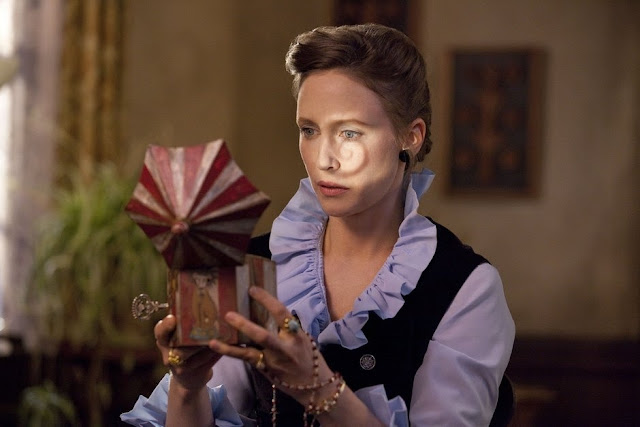 Wan does a nice job balancing quick jump scares, like a face in mirror, while cranking up the tension at the same time. Ron Livingston and Lili Taylor are a likable couple, just trying to make ends meet and give their collection of daughters a better life. As the situation gets worse—before long the entire family is sleeping in the living room—you feel for them, and root for them. Thankfully this is the 1970s, and there are the Warrens, Ed (Patrick Wilson) and Lorraine (Vera Farmiga), renowned paranormal investigators and the polyester clad rock stars of the supernatural and unexplained. Lorraine is a clairvoyant, and sees things others can’t, and Ed is the only outside demonologist officially recognized by the Catholic Church. They cruise around countryside, investigating claims, busting ghosts, helping out, and collecting sinister, possessed objects, which they keep in their den, which functions as a pseudo museum of eerie artifacts.

It is when these parallel stories come together that “The Conjuring” shifts from haunted house ghost story into full possession mode, and the focus changes from ghosts to demons. This is also where the film falters the most. Your expectations and the story have been built up, but when the change comes, much of what comes before goes out the window, and you have to start all over again. The transition is jarring, though ultimately a good move that brings in a whole other world of sinister possibilities. And thankfully the lull doesn’t last long. It’s kind of a best of both worlds situation. You have all of the things that work in a ghost story blending together with all of the best elements of a demonic infestation tale, and the two mesh well.

“The Conjuring” isn’t breaking any new ground, but the usual suspects are used well. There’s a creepy doll, lots of sounds and bumps in the night, ghostly figures in the shadows, and sound design that ups the ante and establishes an atmosphere of tension and horror. Well plotted and paced, Wan uses what we know and expect to great ends. The whole film is designed to keep you on the edge of your seat and keep you uneasy. My screening was full of nervous laughter, released like an expression of relief. “The Conjuring” could have been another run-of-the-mill haunting story, or a bland, toothless tale of exorcism. But Wan puts enough care and thought into his film that, by the time you get to the third act, runs like a well-oiled horror machine, like a cold hand creeping up your spine.

Posted by Brent McKnight at 4:53 PM