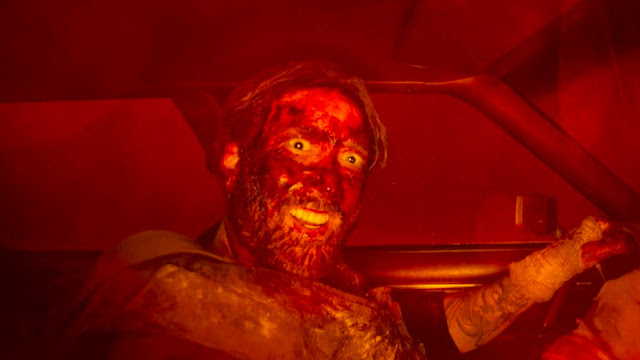 Where to even begin with this one? So, Nicolas Cage may star in a movie called The Unbearable Weight of Massive Talent. Now, it’s not the pretentious title that causes involuntary eye twitching, it’s the fact that he might play a version of himself, who talks to another version of himself from the past. And there’s also a drug cartel and the CIA. Yeah…


This feels like the logical apex of Cage’s roller coaster late-stage career. In reality, it could only ever end with him playing himself. I mean, he battled demon bikers and an LSD addled cult in Mandy, fought a jaguar and an assassin on a boat in Primal, and will battle aliens with martial arts in Jiu Jitsu next year—and that’s just a few of the dozens of movies he’s made in the last recently.

[Related Reading: Nicolas Cage Says Sion Sono's 'Prisoners of the Ghostland' "Might be the Wildest Movie I've Ever Made]

To be fair, we weren’t that far off from this. In Between Worlds, his character reads a book of poems by none other than Nicolas Cage, so this only seems a reasonable next step.

According to The Hollywood Reporter, The Unbearable Weight of Massive Talent was the subject of a bidding war where Lionsgate came out ahead of the likes of HBO Max and Paramount.

[Related Reading: Nicolas Cage Fights a Jaguar and an Assassin On a Boat in 'Primal']

Just read what the article says about the movie:

Cage, if deals close, would star as actor Nicolas Cage. The character is desperate to get a role in a new Tarantino movie while also dealing with a strained relationship with his teenage daughter. He also occasionally talks to an egotistical 1990s version of himself who rides him for making too many crappy movies and for not being a star anymore.

The Cage character is also under a mountain of debt and finds himself forced to make an appearance at the birthday party of a Mexican billionaire who happens to be a fan of Cage’s work and secretly hopes to show him a script on which he’s been working.

While he bonds with the man, Cage is informed by the CIA that the billionaire is actually a drug cartel kingpin who has kidnapped the daughter of a Mexican presidential nominee, and is recruited by the U.S. government to get intelligence. The situation spirals even more dramatically when the Mexican brings over Cage’s daughter and his ex-wife for a reconciliation, and when their lives are on the line, Cage takes on the role of a lifetime.

The whole idea comes from the mind of Tom Gormican, best known as a writer for the short-lived paranormal sitcom Ghosted, with Adam Scott and Craig Robinson, and That Awkward Moment ,with Michael B. Jordan, Zac Efron, and Miles Teller. Gormican co-wrote the script with Kevin Etten (Desperate Housewives) and is attached to direct.

Brace yourself, The Unbearable Weight of Massive Talent is a thing that could very well happen and promises to be the most Nicolas Cage movie Nicolas Cage ever makes.
Posted by Brent McKnight at 1:40 PM