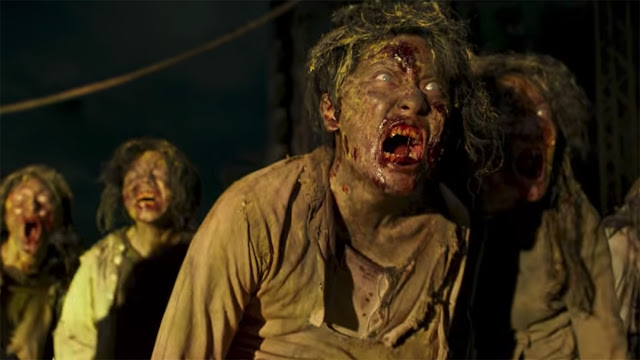 Movie new has been pretty dead as of late, what with most of the movie industry worldwide being shut down due to COVID-19. Still, there were plenty of movies on the way, and a bunch remain en route. One we’re looking forward to around these parts is the South Korean zombie film Peninsula, a new horror set in the world of Train to Busan and now titled Train to Busan Presents: Peninsula. We finally got a look at trailer and damn, this is the stuff we’ve been waiting for.

Not a direct sequel, while Train to Busan shows the beginning of a zombie apocalypse, Peninsula takes place in the same world, but later, after things have gone to hell all over and people struggle to survive and thrive. It doesn’t appear to be going great.

If this trailer from Well Go USA is any indication, Peninsula is nuts. We see big action, a sprawling world, vicious zombies, worse survivors, and all kinds of madness. And we are so, so here for every last bit.

The trailer also comes with our first real synopsis:

Train to Busan director/writer Yeon Sang-ho returns to helm Peninsula, as does co-writer Park Joo-suk, but they’re about the only ones. The new film stars Lee Jung-hyun (The Battleship Island), Gang Dong-won (Ilang: The Wolf Brigade), and more, including a horde of monsters.

There’s no release date for Train to Busan Presents: Peninsula yet, but hopefully it won’t be too long. Though we’d love to see this in a theater and we may have a wait before that’s possible again. But we’ll definitely let you know as soon as we know anything more. Until then, just watch this on repeat and enjoy.
Posted by Brent McKnight at 7:44 AM