Ah, the Satanic Panic. That sweet, sweet era of the 1980s when the whole country was worried about devil-worshipping metalheads performing ritual sacrifices to appease their dark lord. Good times. (Unless you were on the receiving end of the widespread harassment, which sucked.) Anyway, such is the setting for We Summon the Darkness, the latest horror offering from My Friend Dahmer director Marc Meyers.

As cross-country murder spree that’s left 18 dead in the American Heartland rages around them, three friends and heavy metal enthusiasts, Alexis (Alexandra Daddario), Val (Maddie Hasson), and Bev (Amy Forsyth), embark on a road trip to see a band aptly named Soldiers of Satan. In the parking lot, as is tradition, they meet a trio like-minded dudes, Mark (Keenan Johnson), Kovacs (Logan Miller), and Ivan (Austin Swift). When the sextet heads back to Alexis’ parent-less house for a post-show hang, things take a turn toward murder town. 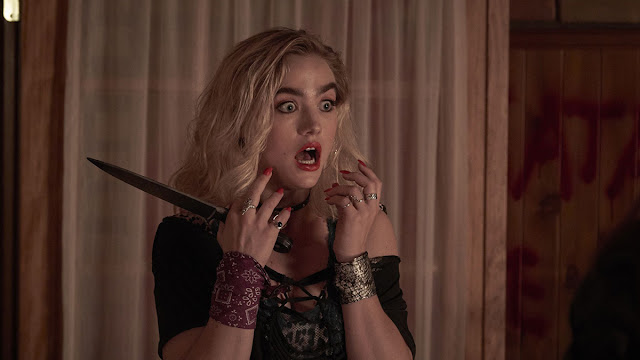 For what’s ostensibly a heavy metal horror movie, I do just have to say, there’s a woeful lack of heavy metal for most of the runtime. Outside of scenes at the concert, there’s relatively little in the way of musical heaviness. C’est la vie. Still, We Summon the Darkness offers a decently fun, bloody romp. It hinges on an early-ish twist that subverts audience expectations and genre gender norms, so the less said about that the better. The result is a bit home-invasion, a bit murderers on the prowl.

Daddario has an absolute blast, playing Alexis with a manic glee and the wild-eyed sheen of a true believer. Teamed with Hasson’s bad-girl Val, the two form a nice mayhem-strewn duo. Bev, written as reserved and haunted by secrets from her past, is unfortunately boring and fades into the background. 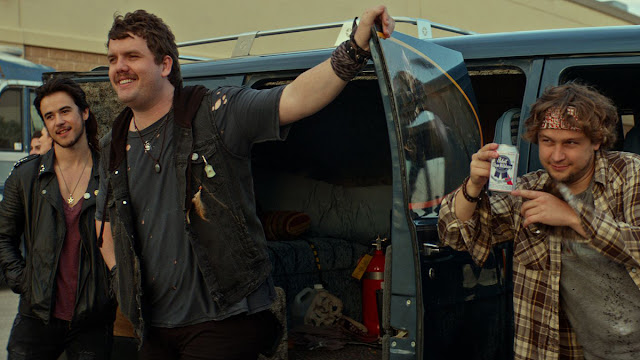 Meyers and writer Alan Trezza capture the  small-town metal head vibe with the boys, and they especially nail the overall shittiness and aimless time-killing of hanging out in pre-show parking lot. Johnny Knoxville has a small role as a hellfire-and-damnation TV preacher that seems tailor made for his over-the-top shtick, though the movie never takes full advantage.

When We Summon the Darkness hits, it’s a fun, if goofy, ride. It’s never particular clever or deep, but it’s entertaining enough. Too often, however, the pace flags and the narrative loses momentum. In the middle of the most delightfully inept murder attempts you’ll ever see, the story keeps kind of wandering off, trying to flesh out characters or offer motivation. Most of what it achieves, however, is to siphon off any energy. [Grade: B-]