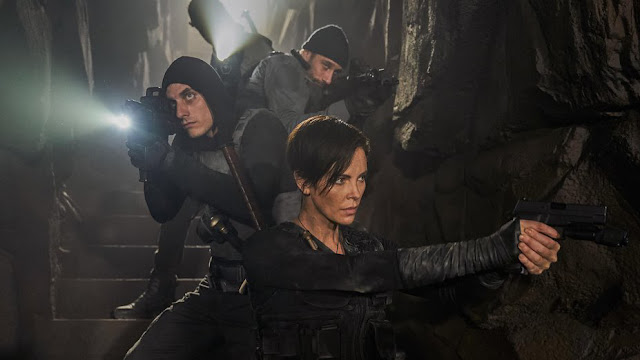 It’s tough out there for immortal soldiers who can’t die and have nothing to do but protect the world. So goes the new action adventure The Old Guard. With an incredible cast and a fantastic director, Netflix has what looks like another big hit on their hands. Check out the first trailer below.

Gina Prince-Bythewood directs it all in what’s something of a departure for her. Most known for intimate tales like Love & Basketball and Beyond the Lights, this is her first major foray into action. She’s helmed a few episodes of action-oriented TV, like Cloak & Dagger, but nothing on this scale. It’ll be exciting to watch her mix her eye for character and drama with high-level combat.

The film follows a group of soldiers who can’t die as they navigate not only the whole of history, but this especially tricky modern age in which we live. They have to contend with protecting humanity from itself and also have all kinds of forces on their tale. Some want to use them for military purposes, while others want to harness their unique ability to turn a tidy profit. Should be fertile territory in which to play around and stage a few action set pieces.

Here’s the synopsis for The Old Guard:

Forever is harder than it looks. Led by a warrior named Andy (Charlize Theron), a covert group of tight-knit mercenaries with a mysterious inability to die have fought to protect the mortal world for centuries. But when the team is recruited to take on an emergency mission and their extraordinary abilities are suddenly exposed, it’s up to Andy and Nile (Kiki Layne), the newest soldier to join their ranks, to help the group eliminate the threat of those who seek to replicate and monetize their power by any means necessary. Based on the acclaimed graphic novel by Greg Rucka and directed by Gina Prince-Bythewood (LOVE & BASKETBALL, BEYOND THE LIGHTS), THE OLD GUARD is a gritty, grounded, action-packed story that shows living forever is harder than it looks.

I’ve never heard of the comic, so I can’t speak to how accurate this looks, but Greg Rucka has a strong track record. (Currently, I’m watching and enjoying the adaptation of his detective story Stumptown.)

Though movie theaters are gradually starting to reopen as COVID-19 restrictions ease in some parts of the world, they’re still operating at a limited capacity. Until things open up in a broader sense, it doesn’t seem likely we’ll get too many big releases theatrically for a while. In the meantime, VOD has been doing a solid job filling the content void, and Netflix has easily been dealing out the highest profile fare with the likes of Extraction, this weekend’s The Lovebirds, and now this.

The Old Guard lands on Netflix on July 10.
Posted by Brent McKnight at 8:28 AM