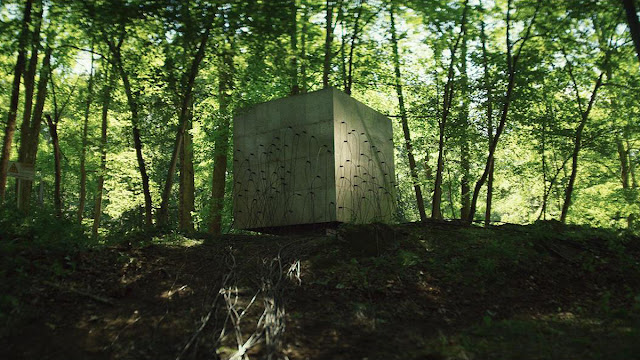 Using the lens of science fiction to examine current real-world predicaments and ills is a staple of the genre. Writer/director Noah Hutton’s indie sci-fi outing Lapsis settles neatly into this category, looking into the pitfalls of the gig economy, while sparing enough time to hurl barbs at the healthcare industry that forces people to choose between massive debt and medical attention. And all of this in the guise of a dystopian mystery, a sci-fi story that executes big ideas on a budget with inventiveness and creativity.

In the near future, Queens native Ray (Dean Imperial) struggles to care for his younger brother, Jamie (Babe Howard), who suffers from a new disease called Omni. A new technology called Quantum has taken the world by storm and become ubiquitous. This leads to an emerging new workforce of independent contractors wandering through the wilderness, laying miles and miles of cable.

Much like Uber, Grubhub, and countless current app-based employment opportunities, this new system, on the surface, offers big paydays, flexibility and freedom, and all manner of other perks and promises. Promises that regularly fail to materialize. While corporate talking heads spout bullet points about potential riches and Horatio Alger-style up-by-your-bootstraps self-determinism, the reality is that the people doing the bulk of the work are not the ones making the money. They’re simply a new class of subjugated drones ensnared by capitalism.

Too good to be true, there’s something fishy going on, and as Ray traipses through the woods, cable in tow, the reality of the situation becomes clear and the truth unfolds. There is, among the workers, small-scale uprisings and resistance, attempts to come together to lobby for things like healthcare, guaranteed wages, and to avoid replacement by an army of creepy, DARPA-esque automatons. Various factions and their reactions to this new technology are epitomized by Anna (Madeline Wise), a crusading journalist who helps Ray dig toward the truth and hopes to expose the lies, and Erica (Dora Madison), who works for an outlaw crew scamming the system for their own benefit. Those are the two extremes, but there exists many shades of grey in between.

Lapsis doesn’t say anything about this new school exploitation of the working class—no job security, having to provide your own supplies upfront, inherent privilege and advantages, corporate malfeasance—that hasn’t been said and that isn’t frequently debated in the media. It does, however, wrap it all in an engaging genre parable. It humanizes the arguments. The world building creates a textured, lived-in space—this is the future, but details like “bathroom tokens,” DNA collection as part of corporate onboarding, gangs of feral children stalking newbies, technology that lets you see at night so you can work longer and longer hours, and other touches feel like progressions that aren’t farfetched or far off. Hutton renders a very possible, even probable world, using ideas, ingenuity, and character in lieu of a big budget.

Imperial drives the whole ship. At first glance, Ray is a stereotypical Queens denizen—there’s even a joke about how he looks like a ‘70s mobster, which he does. But he’s more than what he seems at first glance. He has an earnest drive; all he wants is to work and keep his head down and the chance to give Jamie the best care possible. But when he sees the hidden secrets, he can’t simply stay the course, no matter how much he wants to. It’s a real struggle as he tries to help his brother but can’t unsee what confronts him.

It’s impossible to fully discuss Lapsis without bringing up the ending. No spoilers, but it’s not even an ending, it just…stops. The momentum builds, it gets to a point where everything comes to a head, and nothing. Cut to black. Credits. There’s zero resolution, zero resolve. I understand that, especially with smaller movies, indie movies like this, sometimes you just don’t have it. There’s no money or time for reshoots, and if you it’s not on film when you wrap, there’s nothing you can do. But damn, this feels incomplete, like there are scenes or a final reel missing. As strong as the rest of the movie is, this conclusion hamstrings it, leaving questions dangling—not in a good or intriguing way—and arcs incomplete. It’s incredibly unsatisfying, even deflating, and a damn shame in what’s otherwise a fantastic movie.

The end doesn’t ruin Lapsis or undo what it accomplishes, but it does leave a dark cloud to linger over the entire picture in retrospect. Hutton’s feature debut, it’s an impressive outing, full of absorbing, of-the-moment themes and concerns, up there with some of the best of the year, until that finale. It’s a hard pill to swallow, but at least until that point it’s a clever slow-burn sci-fi mystery that’s definitely worth watching. [Grade: B-]