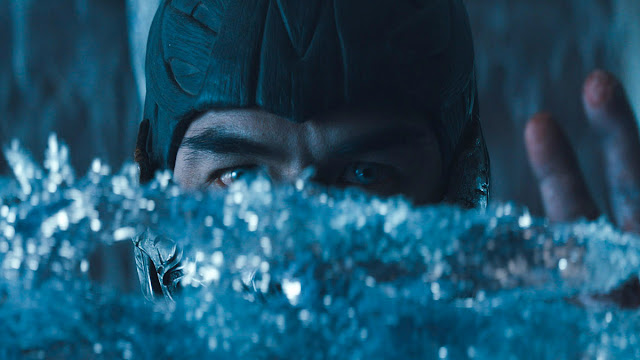 Video game movies have a bad rap, which, let’s be honest, is largely earned. As much as I enjoy the Resident Evil movies and a handful of others, there are some absolute dogs. Yet every time a new adaptation comes out, we collectively ask, “Is this the one that breaks the curse?” Who knows if it will, but the latest attempt to translate Mortal Kombat to the big screen has a lot going for it and this first trailer looks pretty damn rad.
Cards on the table, I’m not a gamer, never have been, so I don’t have much investment in a Mortal Kombat movie outside of wanting it to kick ass. I’m not particularly worried about getting the lore and characters right. I won’t notice if they mess up one of the many specific realms. But based on this trailer, it might kick a good amount of ass, which is what I do care about. There’s plenty of bloody violence, and come on, Joe Taslim makes an ice dagger out of blood mid-fight. All in all, this bodes well for someone getting their spine ripped out of their body.

Sure, whatever story the writers concoct to get all the iconic characters into a fight-to-the-death tournament promises to be janky, but we’re not watching this for intricate plot mechanics and delicate, nuanced characters, are we? This looks super fun and has a solid cast that includes Taslim, Mehcad Brooks, Lewis Tan, Hiroyuki Sanada, Tadanobu Asano, and tons more. We’re hooked already.

[Related Reading: 'The Night Comes for Us' Review: Joe Taslim Pummels Everyone]

In Mortal Kombat, MMA fighter Cole Young, accustomed to taking a beating for money, is unaware of his family’s heritage – or why Outworld’s Emperor Shang Tsung has sent his best warrior, Sub-Zero, an otherworldly Cryomancer, to hunt Cole down. Fearing for his family’s safety, Cole goes in search of Sonya Blade at the direction of Jax, a Special Forces Major who bears the same strange dragon marking that Cole was born with. Soon, he finds himself at the temple of Lord Raiden, an Elder God and protector of Earthrealm, who grants sanctuary to those who bear the mark. Here, Cole trains with experienced warriors Liu Kang, Kung Lao, and rogue mercenary Kano, as he prepares to stand with Earth’s greatest champions against the enemies of Outworld in a high stakes battle for the universe. But will Cole be pushed hard enough to unlock his arcana – the immense power from within his soul – in time to save not only his family, but to stop Outworld once and for all?

Mortal Kombat fits into WB’s current release strategy for their big movies. That means it hits whatever theaters are open on April 16, but the same day it also lands on HBO Max, where it will hang out for 31 days.