At a certain point a franchise has to reinvent itself or risk doing the same thing time and time again to diminishing returns, sinking into obscurity all the while. That’s where the mutant backwoods cannibal saga Wrong Turn finds itself in 2021. With six films in can, the increasingly gory DTV series hasn’t had an installment since 2014. But a new year means a new movie, as well as a new direction. Don’t worry, there are still backwoods cannibals.

Wrong Turn 2021 is one of those franchise entries that serves more as a reboot than a proper sequel. It does bring back writer Alan B. McElroy, who penned the original, for the first time since that film. Still, if this was called by any other name, one might note similarities, but that’s all that binds it to the larger family. For the most part, however, this attempt to reinvigorate a semi-dormant IP succeeds. Director Mike P. Nelson’s film is gory, tense, takes the narrative in unexpected directions, and isn’t afraid to get weird with it.

[Related Reading: This 'Raw' Clip Will Make You Want to Peel Off Your Own Skin] 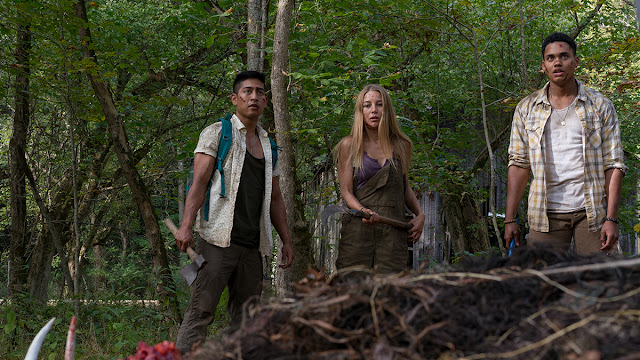 The story begins with Scott (Matthew Modine). He shows up in a small Virginia town looking for his daughter, Jen (Charlotte Vega), who was on a road trip with friends and disappeared six weeks ago. We then jump back in time to see what happened to Jen and her pals. Initially at least, Wrong Turn follows the expected trajectory. Out-of-their-element young liberal 20-somethings rub the racist, closed-minded town folk the wrong way, creating tension and setting up an inevitable clash. You think you’ve seen this film before. And to an extent, you have.

But what starts off as a cautionary, don’t-piss-off-the-locals-then-go-into-the-woods tale takes a turn as Nelson and McElroy subvert the expectations they establish. Yes, against the advice of everyone, the kids veer off the beaten path; yes, when they do, bad things happen and someone hunts them through the wilderness. But instead of the obvious threats, they find something much older, darker, and more sinister with which to contend. What kicks off as hillbillies versus city slickers ultimately morphs into Appalachian folk horror with far-reaching historical ties. To say much more ruins much of the joy, but suffice it to say, when the plot shifts this direction is where the fun starts. 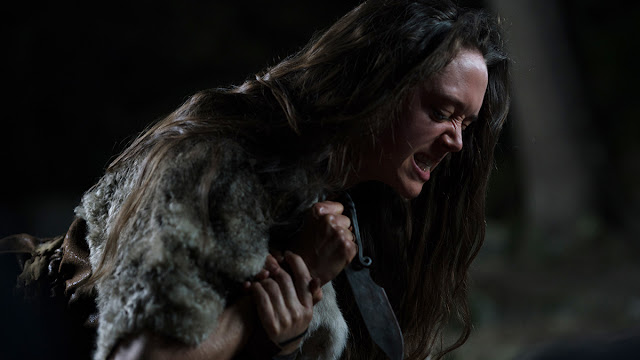 Wrong Turn does have its fair share of clunky bits. Though it pays off in the end, the Modine thread never smoothly integrates into the flow—it’s jarring to leap back and forth. The film frequently pauses for moments of tedious moralizing from multiple directions. Character choices strain credulity, sometimes in a fun way, but there are often significant logical gaps that, even for ludicrous horror movie territory, become a bit much.

And if we’re being honest, outside of Jen, the characters aren’t much either—even she’s thin as hell for most of the movie. Their personalities all read like the product of random woke hipster mad lib generator. There’s the head of the clean energy non-profit; the gay couple who runs two New York City bistros; the waify girl with dyed black hair, monochromatic tattoos, and thick black glasses; and the entitled white guy who, loudly and often, presumes everyone in this town is racist. Then there’s Jen, on a quest to eat, pray, love her way through life, “trying to figure it out.” They’re insufferably idealistic in the shallowest way. 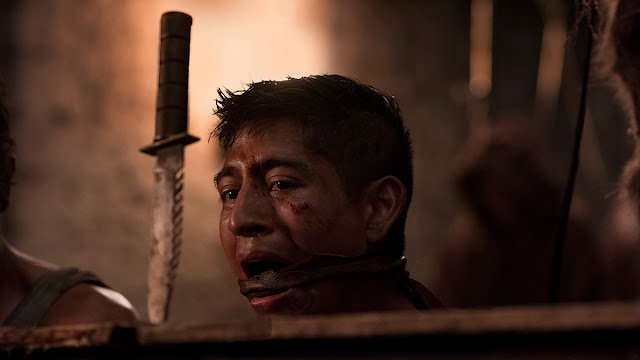 On the other side are the townies, who, at every turn, prove loudmouth dickhead’s assumptions. They’re basically a random assortment of the-South-will-rise-again rednecks. Though they do have the good fortune to count Tim DeZarn as their leader, and he may be the best ominous-horror-movie-hillbilly currently working, so that’s nice.

All in all, the characters function as intended and as the need to, but they don’t bring much in the way of personality or investment. Most of the time, Wrong Turn careens forward with enough momentum this isn’t an issue, but in the moments it slows down, you see the light shine through the threadbare fabric of these caricatures. By the end, once she’s been through a hellish ordeal, Jen has some meat on her metaphorical bones, but it takes a good long while to arrive. 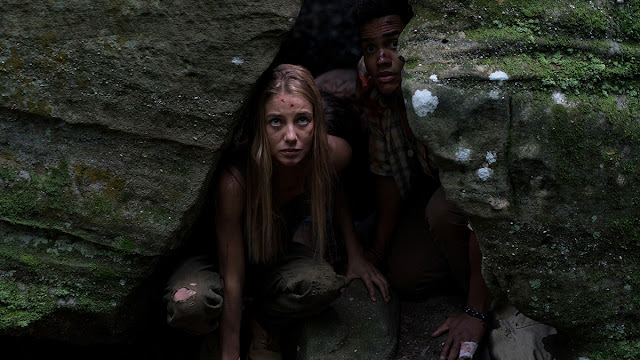 But despite the flaws and hang ups, when Wrong Turn hits, it delivers the goods and is a total blast. I called this “the head-bashiest movie I’ve seen in a while,” and that’s the truth. Brutally violent, at times it threatens to churn one’s stomach. Full of all kinds of mountain-man booby traps—they seriously border on Predator territory at times—the filmmakers apparently toned way down just to get an R-rating. (According to a friend who interviewed Nelson recently, there may be an NC-17 version at some point, and considering what made the cut, god help us all.)

Mean, nasty gore isn’t all Wrong Turn has to offer, however. As the situation spirals farther and farther out of control for our heroes, it continually boosts the tension and pressure as well. The filmmakers use the deep woods setting, isolation, and inherent danger to their advantage, crafting scares as things go from bad to worse to hot damn they’re screwed. 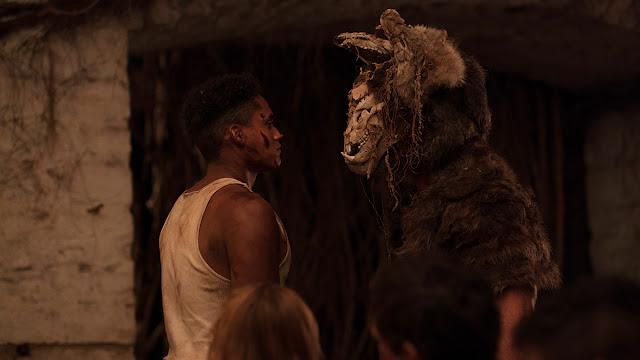 The set and costume designs are both excellent; intricate, inventive, and, most importantly, spooky as hell. There is, however, one issue here. It’s one often found in westerns and post-apocalyptic movies. Eventually, the group of protagonists encounter a hidden society in the hills, one that remains insulated from the outside world. They date back hundreds of years and have little to no contact with modern culture.

In this realm, however, everything looks a little too new. The wood used for compound walls is fresh and unweathered; everyone is a little too clean and tidy, their teeth all perfect; Bill Sage (We Are What We Are) plays their leader, and his haircut is simply too crisp and immaculate. In short, nothing appears as lived in as it needs to. It’s not a huge distraction, and again, the tempo generally holds up enough that it never allows us to linger on this, but it does stand out in moments.

[Related Reading: 'We Are What We Are' Movie Review] 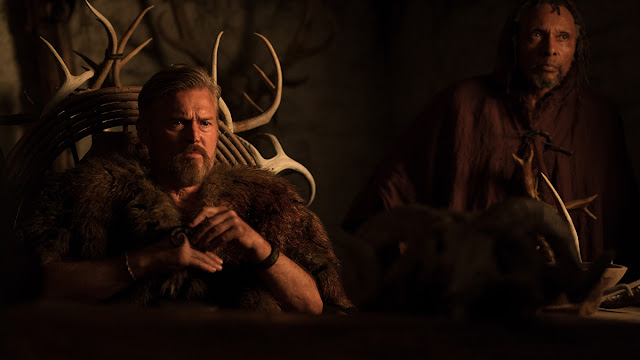 Even with significant hang ups, Wrong Turn mostly delivers the goods. It provides a fun, vicious hillbilly horror romp, full of gore and tension and just enough thematic similarities to get away with using the established name. While it remains to be seen if this will serve as the jumping-off point for more movies, it’s a solid, entertaining, energetic stand alone. Also, make sure to stay through all the psych-out endings, it’s worth the wait. [Grade: B-/C+]