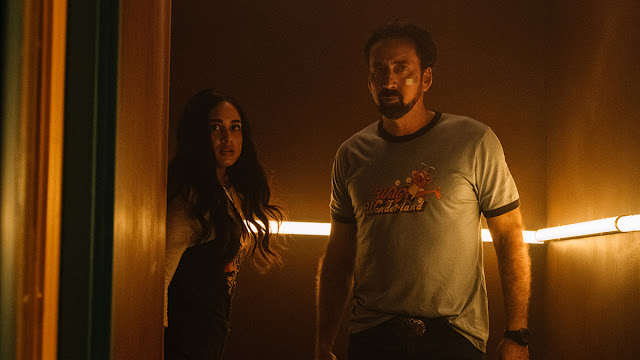 Nicolas Cage battling evil animatronics come to life. That’s it, that’s the pitch. Based on that, most people probably know whether or not they want to watch Willy’s Wonderland. I’m a simple man and I’ve watched movies for so much less. And as someone who grew up traumatized by the heyday of hellish robotic children’s entertainment of this ilk, the kind featured at establishments like ShowBiz Pizza (and to a lesser degree, for me at least, Chuck E. Cheese), this hits very close to home indeed.

Willy’s Wonderland is one of those movies that delivers precisely the movie advertised. It’s cheap and hokey and wholly absurd. At times the pace drags and plot threads fall by the wayside for extended periods. But for all the obvious faults, it’s also raucous and unhinged, which is enough to carry it through. After all, this is a movie where Nicolas Cage uses a plunger to fight a dude in a gorilla suit before curb-stomping it to death in a bathroom. I mean…come on.

[Related Reading: ‘Prisoners of the Ghostland’ Movie Review: This Might Actually Be Nicolas Cage’s Wildest Movie] 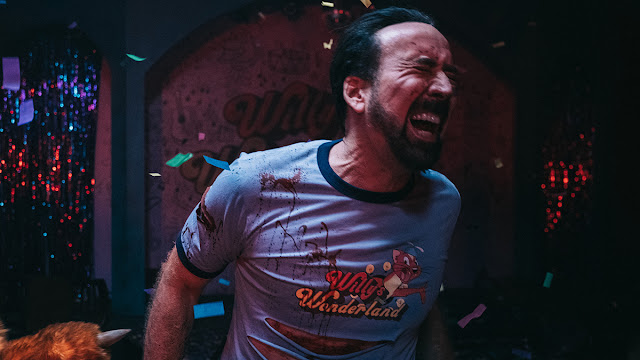 Directed by Kevin Lewis and written by G.O. Parsons, Willy’s follows the Janitor, the latest in Cage’s not-really-named protagonists. (See Prisoners of the Ghostland where he plays a hero named Hero.) When his car breaks down in a small town, in exchange for the needed repairs work, he agrees to spend the night cleaning Willy’s Wonderland, an uncanny nightmare of an abandoned pizza joint full of broken down animatronics and skin-crawling children’s songs. Before long, you guessed it, the robots come to life and he has to fight for survival against a raggedy weasel and his equally shabby companions.

Best of all, the Janitor is completely unfazed by all of this. The first attack happens, he dispatches his foe with a bloody flourish, and he simply changes shirts and goes back to his assigned task. Whatever else goes on, he regularly pauses when the alarm on his watch sounds, when he plays pinball and pounds the supply of soda he brought himself. It’s important to take breaks during a work day. Hell, he cavalierly duct tapes closed a wound on his face as if he nicked himself shaving. We already knew he was tough because of the dog tags hanging from his rearview mirror, but damn. And with all of this, he never utters a single word. 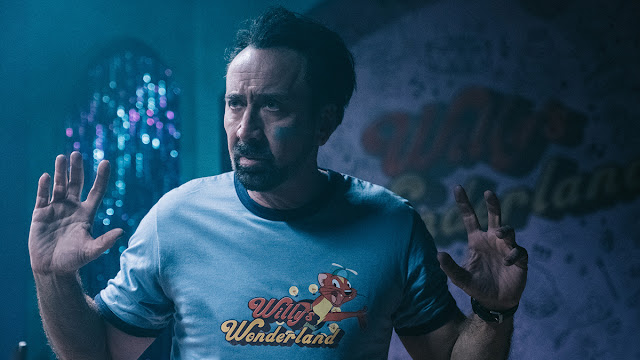 You may ask, how Cage-y can Cage truly get without speaking? The answer is plenty. Sure, he doesn’t talk, but he does make various guttural I’m-in-a-fight sounds throughout his battles. Not to mention plenty of exaggerated silly dancing during his pinball sojourns. Maybe he can’t speak, but that doesn’t mean he’s not going to enjoy the hell out himself and chew on the scenery as only he can. 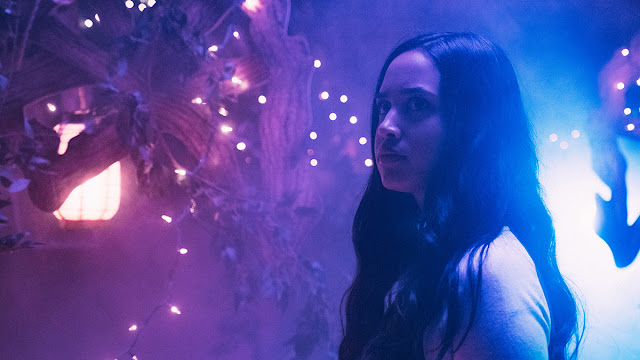 These instances are simultaneously where the momentum drags the most and the loopiest, goofiest, most entertaining bits. I don’t want to give away any specifics, the joy is in the discovery, but rest assured the hows and whys of the situation are a fitting match for a narrative about Nic Cage fighting vicious, if bedraggled, robots.

Lewis and company have a fine time playing up the eeriness inherent in these ‘80s throwback monstrosities. The twitchy, unnatural movement coupled with the tinny canned songs about birthdays and such create an aesthetic that’s innocuous and sinister at the same time. Designed by Kenneth Hall (Critters, Ghoulies, *cringe* Baby Geniuses), the creature effects are schlocky and low-budget, but they actually capture the vibe of these artifacts from a particular short-lived era of childhood terror. Sometimes, however, primarily during the fights, it’s just a person in a costume, which, while fun, loses degrees of creepiness. 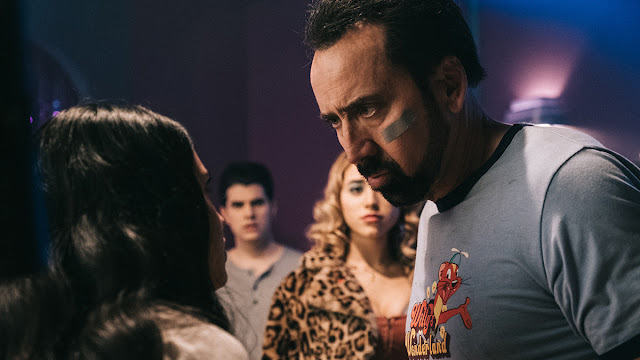 It’s a cop out for sure, but there’s no other way to accurately say this: Willy’s Wonderland is exactly the movie you expect. Based on how you feel about that, your mileage will certainly vary. I, for one, feel glad about it, thus this movie made me quite happy. It has Nicolas Cage fighting his way through Satanic animatronics, and enough earnest goofiness to fill out a roughly 90-minute movie in pleasing fashion. And keep your ears open for one of the most ridiculous, and likely quite expensive, chef’s kiss of a needle drop. You’ll know it when it happens. [Grade: B]