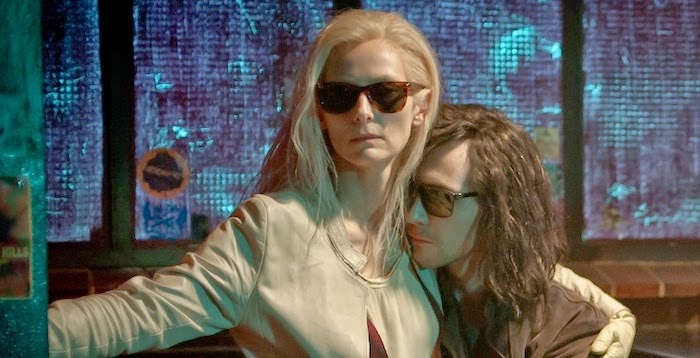 Indie auteur Jim Jarmusch is no stranger to existential drama, though his latest, “Only Lovers Left Alive,” marks the first time he’s ventured into supernatural territory, with an in-depth examination of the tormented lives of vampires. In reality, the undead condition of his leads, Adam (Tom Hiddleston) and Eve (Tilda Swinton), has very little to do with the surface action of the film. Complications arise on occasion, but more than anything, this is a moody, atmospheric slice of vampire life that plays like a dirge or a funeral song. “Only Lovers” explores their lives, it just so happens that their lives go on for centuries and span multiple eras.

The plot is rather predictable, you see the various obstacles and conflicts coming from a distance, but wowing you with narrative pyrotechnics is never part of the plan. This film is a deep study of two characters. Adam is a reclusive musician, living an isolated, Spartan life in Detroit. He collects vintage guitars, and has, in previous incarnations, handed out his own songs to the likes of Schubert and hung out with Byron and the Shelleys. His wife of many centuries, Eve begins the film in Tangiers, but when her love becomes particularly maudlin, she joins him in the Motor City.

“Only Lovers” is little more than Hiddleston and Swinton together in a cluttered room, and you couldn’t ask for more than that. These strange, beautiful creatures haunt their surroundings, and both actors are in incredible form. Adam has grown so weary that he even has his lackey (Anton Yelchin) get someone to fashion him a wooden bullet should he ever need to end it all. Eve, so pale that she’s almost translucent, whispers through the streets of Morocco like a ghost, appearing very much as the otherworldly creature she is. They’re barely there, having witnessed and participated in history from the background, quietly reaching out from time to time to steer things, like Eve’s best friend, Christopher Marlowe (John Hurt). The man many suspect actually wrote everything credited to Shakespeare, in this view he is a vampire, who, like Adam wrote songs for famous composers, did the same with his work. More than anything, Eve simply wants Adam to live this life they’ve been blessed or cursed with, depending on how you look at it.

Every element of “Only Lovers” is designed to create a mood, a strange atmosphere that is both unsettling and mundane, simultaneously unusual and familiar. Your introduction to the movie is a dizzying spin, filmed from above, that cuts back and forth between the two central figures. You begin disoriented, gradually picking up on the hints and cues that Jarmusch, who also wrote the script, leaves for you. A discordant psychedelic score saturates every scene, and accentuates the calculated, deliberate pace, until you feel like you’re watching something akin to an opium dream.

Detroit is the perfect setting for such a sparse, spare story, and is a magnificent visual prop for Jarmusch to play with. The bulk of the action that takes place outside of the heavily-draped confines of Adam’s massive old row house involve long nighttime drives that the lovers take through the city. In Jarmusch’s hands, Motown unfurls like the deserted ruins of a once great metropolis, mythic in its own history, and they seem like explorers rather than aimless wanderers. It is an incredible illustration of how a filmmaker can use a city or a setting to truly startling effect.

“Only Lovers Left Alive” is part of the larger vampire lore and pays homage to the history, referencing the likes of Faust and Caligari, and abiding by the established rules—they can’t go out in the sun and all of the usual restrictions—but the film also manages to be something uniquely its own. There are small tweaks and changes, like having to be careful where they source their blood because humans have polluted their own veins to an unhealthy degree. Think of it like buying organic or shopping local, knowing where your food comes from as opposed to grabbing some shrink-wrapped thing processed who-knows-where full of god-knows-what kind of chemicals. There is no battle for dominance against werewolves or other clans, no hunters to contend with, this is their normal daily lives, their lives just happen to be something mythic and fantastic. The final act is where the film is weakest, but by that point you’re already hooked and would follow these two anywhere.

Posted by Brent McKnight at 5:10 PM