During production, Nicolas Cage said Japanese director Sion Sono’s Prisoners of the Ghostland “might be the wildest movie I’ve ever made.” Which is saying something from a man who once made a movie where he wore John Travolta’s face. Then again, he’s not wrong. Face/Off, however off-the wall, doesn’t have the testicular explosions, irradiated mutant ghosts, and the ubiquitous cracked mannequin masks of Prisoners. The final product is something like a hyper-absurd post-apocalyptic Escape From New York riff. And I’m here for every last second.

And if we’re being honest, Prisoners of the Ghostland ranks as one of Sono’s more subdued films. That’s not to say it’s any more accessible, but there is much less arterial blood spray and carnage than many of his films. But don’t worry, stans, he still includes plenty, simply not as much in comparison to other titles in his catalog.

What the film lacks in blood (again, comparatively) it more than makes up for in sheer strangeness. In reality, it’s like a number of movies stitched together in off-kilter ways. It’s part western, part post-apocalyptic wasteland saga, a tale of redemption, the journey of a prophetic hero foretold to save the people, and a parable warning of the dangers of nuclear power.

Cage stars as a nameless Hero. A frontier outlaw, when he’s arrested for doing outlaw things, The Governor (Bill Moseley), a despotic warlord, forces him to don an explosive leather suit—yes, a suit that will explode if activated in various ways, including when he gets aroused. Hero must venture into the Ghostland, a barren waste riddled with samurai ghosts and malformed mutants, to find Bernice (Sofia Boutella), The Governor’s wayward “granddaughter” who fled his compound. The film never explicitly states as much, but Aaron Hedry and Reza Sixo Safai’s screenplay certainly intimates she’s part of a harem, not a blood relation. 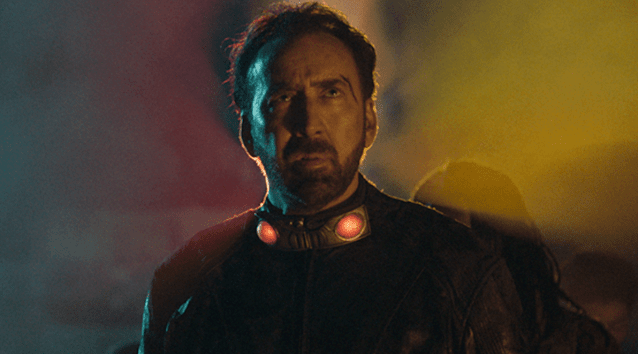 The world Hero sets out into, in a black Toyota Celica, features a variety of post-apocalyptic tropes. It’s a ruined world full or broken people trying to scrape out an existence and survive by any means necessary. It plays much like The Road Warrior, but filtered through Sono’s sensibilities and awash in his singular eccentricity. Characters like Ratman and his Rat Clan cobble together bizarre costumes out of trash, villagers band together to literally stop time by physically holding back the hands of a giant clock, and others sheath themselves like mummies and hide behind eerie cracked masks.

Presumably, these coverings often hide the ugly effects of the omnipresent radiation. Like Godzilla before it was a response to the nuclear bombs dropped Japan and the subsequent rise of the nuclear age, it’s hard not to read this portion of Prisoners of the Ghostland as a reaction to the Fukushima Daiichi disaster. This scarred, mutilated world is the result of a similar incident, and the film looks like another attempt to cope and come to terms with national trauma and tragedy via bonkers-ass sci-fi art. This gives the story a weight and bearing that belies the over-the-top antics, peculiarities, and flourishes as the filmmakers and characters literally and figuratively confront ghosts from the past.

Though less prominent, and certainly with less of an eye on boundary pushing exploitation tactics he so often employs, Prisoners also plays with some of Sono’s favorite themes and concerns. Like so many of his films, this features women, specifically young women, controlled and preyed on by older men who wield power over their bodies. The Governor keeps stables of women in elaborate gilded cages. At one point Hero peels away the covering another man placed on Bernice to keep her hidden, to “protect” her, and her search to regain her voice forms a key plot point.

Originally a dancer, Boutella has a unique physical control and presence on screen. Though relegated to a passive role for much of the film, Sono lets her cut loose during the final act, and she gets in on the chaotic mayhem of the climax. Wielding swords, slicing through nameless goons, she wrenches control of her own body back from the film’s men. Why she's not a bigger action star is beyond me. 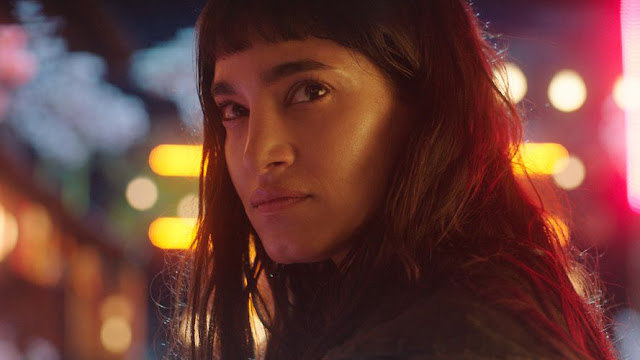 This era of Nicolas Cage’s career is a well-known crapshoot. Putting out four to six movies a year, due in part to his very public tax issues, there’s a lot of phoning it in. But for every rote, lackluster turn, he still occasionally unleashes his trademark mania in the likes of Mom and Dad and Jiu Jitsu. Rarer still, he reminds us that he has an Oscar for a very good reason, in movies like Mandy and Color Out of Space.

Here he certainly brings it, whatever it may be, and always makes intriguing choices. He vacillates between the stoic, jaw-clenched glare of a western antihero archetype and the unhinged scene-chewing that made him the subject of countless memes. The switch flips from quiet smolder to full-blown cocaine-fueled mayhem and back with a startling ease, like it’s the most natural thing in the world. He quietly stares down villains one moment only to shriek, “I will karate chop you,” the next. “Hi-fuckin-ya!” indeed. (Incidentally, not the first time he’s uttered this phrase in a movie.) This is the total Cage-Rage package and he clearly enjoys himself. And he passes that enjoyment right along to the audience. He also delivers the single greatest delivery of the word testicle you have or will ever encounter in a movie.

At times, Sono overstays its welcome in certain scenes. Early on, The Governor takes his sweet time explaining every last intricacy of Hero’s bomb suit, and there are many. Or when it’s time to set out on his quest, Cage initially heads into the wastes on a raggedy bike with basket and bell before realizing time is short and should take the Celica. These scenes drag on, but even then, they’re so steeped in weirdness and oddball touches, and full of unnerving visuals, the down moments are easy enough to gloss over.

So, the real question of the day is: Is Prisoners of the Ghostland truly the wildest movie Nicholas Cage has ever made? With a post-apocalyptic circus vibe, and the cinematic equivalent of throwing half-a-dozen subgenres in a blender, it’s certainly in the running. And that makes for one hell of a time. [Grade: B+]