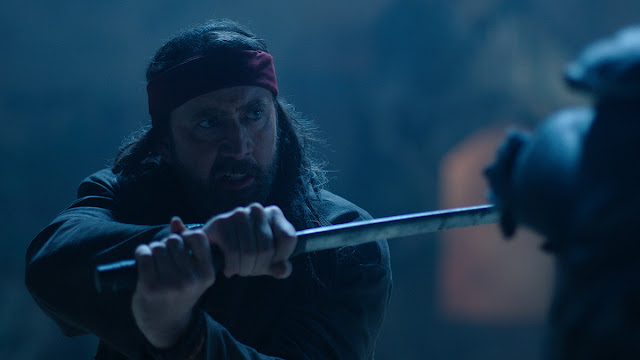 A movie starring Nicolas Cage, Alain Moussi, Tony Jaa, Frank Grillo, JuJu Chan, Marie Avgeropoulos, and Rick Yune, about a group of elite fighters who must use martial arts to defeat an alien invader, directed by one of the masterminds behind the recent Kickboxer films. That’s probably enough information for viewers to decide whether or not to see Jiu Jitsu, a film that delivers precisely what one might expect, waffling between awful and awesome.

Based on a comic book by director/co-writer Dimitri Logothetis, Jiu Jitsu plays like riff on The Bourne Identity meets Predator, down to the memory loss and extraterrestrial heat vision. At times, it’s as wild, unhinged, and fun as that sounds. Other times, not so much, bogging down in tedium and a threadbare budget. 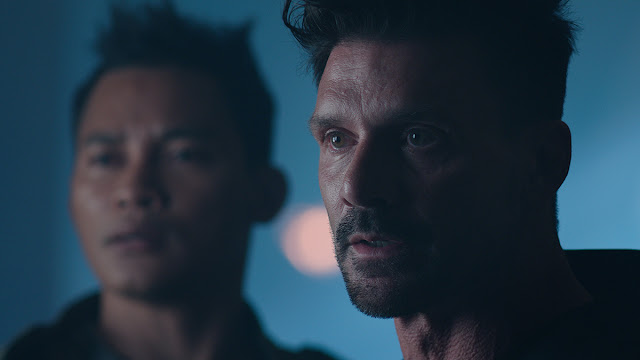 The movie opens with Jake (Moussi) running through the jungle, fleeing some unseen threat. He tumbles off a cliff into the ocean, is found by a fisherman, and wakes up with a case of near total amnesia. Teaming up with an army intelligence officer (Avgeropoulos), who is in Myanmar for some vaguely justified reason, he discovers he’s part of a sect of fighters—made up of Jaa, Chan, Grillo, Marrese Crump, and more—tasked with fighting an alien named Brax who shows up every six years for a tussle. If they don’t fight him, he kills everyone. In the world. Cage’s Wylie is their leader/guru/weird uncle who lives in a cave.

If that sounds convoluted, that’s not even the half of it. The plot unfurls like a jumbled, haphazard collection of questionably written scenes stitched together by tenuous logic and circumstance. There’s nothing in the way of character development, emotional investment, or depth of any kind. And it leaves the definite sensation that the production had various actors for limited amounts of time, shot what they could, and assembled the pieces into some semblance of a narrative, unceremoniously dispatching characters at random junctures with throwaway lines. (More than once I paused and muttered, “Well, I guess that person’s dead now.”) 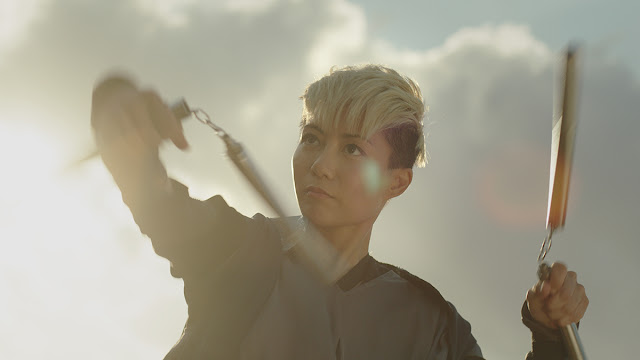 But meticulous plotting and nuanced characters aren’t what most people are coming to Jiu Jitsu for. With a cast that collects many of the greatest cinematic martial artists of this generation, we’re here to watch badass intergalactic throwdowns. And on a technical level, despite the fact that there is relatively minimal actual Jiu Jitsu, the fights are solid—they have to be with this crew. Logothetis also knows what he has with this cast and is smart enough to get the hell out of the way and lets these people do their thing, allowing fights play out in wide shots with few cuts. It has all the face-kicking, skull-elbowing, Tony-Jaa-kneeing-through-doors one could want. Everyone gets their moments to shine, but JuJu Chan stands out, pummeling dudes with a giant grin on her face, clearly enjoying herself a great deal.

Though the fights deliver from a mechanical standpoint, even though cheap production values hamper them in some instances, they carry almost no weight beyond that. There’s no investment in any characters or relationships—and shallow, sporadic attempt to create some are groaners—which means there are zero personal, individual stakes. And while the large-scale stakes may be global, they’re so big they wind up abstract and meaningless with nothing to ground them. It all rings empty and hollow. 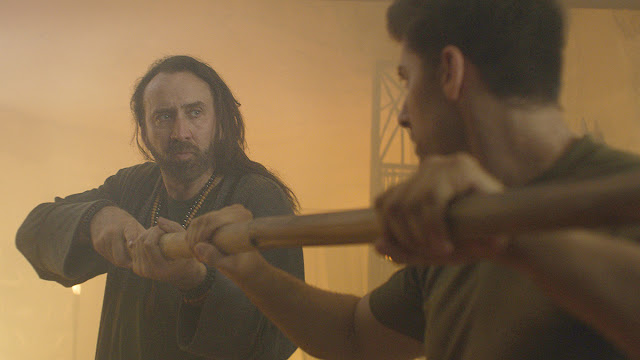 A major reason folks may find their way to Jiu Jitsu is the Cage. His late-stage career is a mixed bag, but when goes for it, he goes for it, and he certainly gives it a whirl here. Manic and wild, he lives in a cave, walks around with a staff, and makes hats out of newspapers, uttering wisdom like, “There’s no honor in killing crazy.” With his long, dirty hair and filthy head band, he’s reminiscent of Dennis Hopper’s photographer in Apocalypse Now crossed with a martial arts wizard. His scenes are a blast and the cinematic maniac, himself an accomplished Jiu Jitsu practitioner, even gets his own action sequence to show off his goods.

Jiu Jitsu is the movie it promises to be. For good and for ill. It’s cheap and shoddy and blatantly lifts from Bourne and Predator. (Including an invisible alien hiding in a tree.) With a who’s who of movie badasses, the fights deliver, though those are balanced by moments of jumbled tedium and flat characters. Watching Nicolas Cage is a damn fine time, which isn’t always the case—it’s a crap shoot these days whether we get Mandy (good, engaged) or Running with the Devil (entirely disinterested). There are good things and bad, moment to love and to hate; make of that what you will. [Grade: C]

Posted by Brent McKnight at 8:35 AM

Thanks for sharing this review. Was bit strange to see Cage in this movie but nonetheless, still good action. I'd say it's mostly for the fans though, especially for people that enjoyed the kickboxer remake.

To me, it felt like Mortal Kmabta meets Predator but fails at both. Was so hoping this was going to be good. I also reviewed this movie at https://martial-arts-review.co.uk/