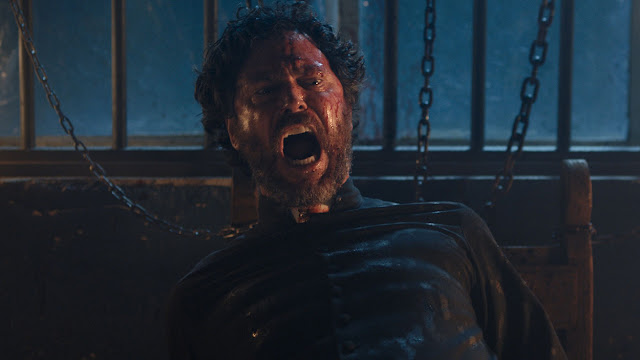 Exorcism movies get overplayed for sure, but there’s a good reason for that: When they hit, they tap into a primal, inherent fear, playing on themes of control, faith, and religion that shake people deep, deep down, even non-believers. Director Alejandro Hidalgo’s The Exorcism of God doesn’t entirely land in this regard, but despite leaning on familiar tropes, it has unique flourishes and goes crazy enough that it winds up being pretty awesome and a damn entertaining watch.

An American priest working in Mexico, Father Peter Williams (Will Beinbrink, Queen of the South), gets roped into performing an exorcism he’s not prepared for. It goes bad and he winds up committing a heinous sin, even as he, at least appearance wise, succeeds in casting out the demon. 18 years later, he lives a life of quiet servitude in a small village. While revered by the citizens, he guilt and secrets still haunt him. A familiar demon comes a calling and possesses a young woman, Esperanza (Maria Gabriel de Faria), and a battle for the very soul of the village ensues. 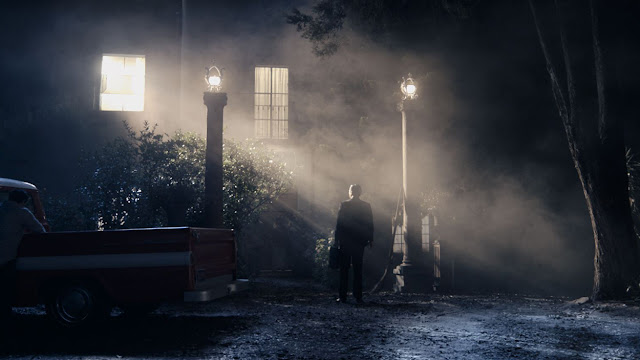 The Exorcism of God gradually unfurls the mystery of what really happened all those years ago, hinting and alluding before pulling back the curtain. That’s all well and good, but the film works best when Hidalgo, who co-wrote the script with Santiago Fernandez Calvete, lets loose and gets wild. Father Pete sees horrific visions, like a zombie demon Jesus, and at one point there’s an entire mental institution, itself a hellish nightmare of a prison, full of demon-possessed inmates raging through the corridors. Things get more and more out of hand and before long, what began as a fairly traditional exorcism tale goes completely over the ledge. It’s gory and horrendous, and certain sequences even call to mind the likes of Evil Dead they’re so over-the-top.

Once the first act lays out all the pieces, the film careens along at a breakneck pace, which allows you to gloss over moments where you might otherwise raise your hand and ask questions. Or where, if you look too closely, you may see some dubious stitching holding it all together. But fortunately for those of us in the audience, we never have to wait too long until the next geyser of vomit or blood. 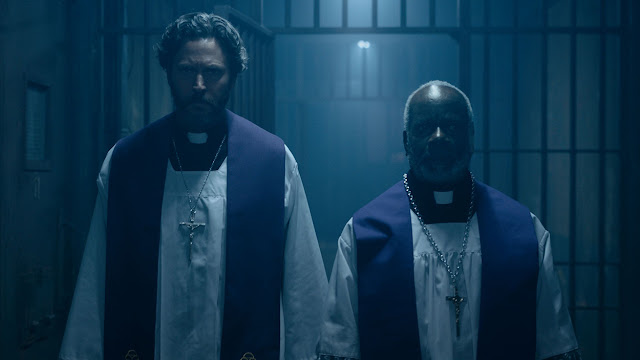 Beinbrink does a solid job, though his character may be the weakest part. Come on, a priest with a past and a crisis of faith has been done, a lot, which makes it difficult to do anything unexpected, though not for lack of trying. He, of course, has an older mentor, Father Michael Lewis (Joseph Marcell, aka Jeffrey from Fresh Prince of Bel Air!), the “world’s greatest exorcist” if the script is to be believed, a horrible drunk who bucks the exorcism establishment and espouses “auteur exorcisms.” Together they face down all manner of horrors, spiritual and otherwise.

This is a nice looking movie, slick and confident. Hidalgo and cinematographer Gerard Uzcatequi make excellent use of the dank, dingy prison. They pepper the film with religious iconography to accentuate the religious dread and enhance the general spookiness, and it overflows with looming shadows, flickering lights, demons popping out of various hiding spots, and a grab bag of other horror touches. 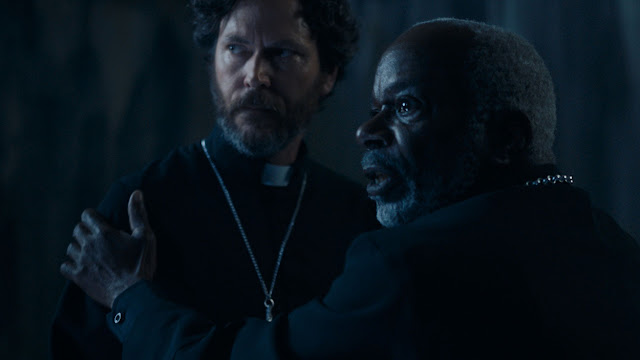 Though definitely walking a well-trod path—and also tipping the cap iconic exorcism films like, shockingly, The Exorcist—The Exorcism of God brings along enough of its own personality so it’s never stale or too familiar. The crazier it gets, the more fun it becomes, and thankfully it gets plenty unhinged. [Grade: B]