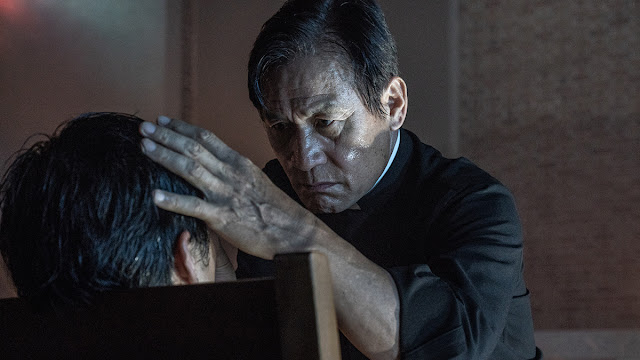 If you haven’t been waiting for a South Korean MMA exorcism movie, Kim Joo-hwan’s The Divine Fury is here to inform you that you need to get your priorities in order. It deftly blends horror and action and is sure to call to mind the likes of Blade at times, while grappling with weighty themes of loss, faith, loss of faith, and evil.

When he loses his father to a tragic accident, Park Yong-hu (Park Seo-jun, Parasite) also loses his faith in god. 20 years later, he’s a champion MMA fighter on top of the world. Until he develops wounds on his hand that look suspiciously like Stigmata. Searching for answers, he turns to Father Ahn (Ahn Sung-ki, Unbowed), a kind of badass underground priest the other men of the cloth call in to tackle the roughest exorcisms no one else will touch, and finds himself embroiled in a desperate battle against malevolent forces on the rise. 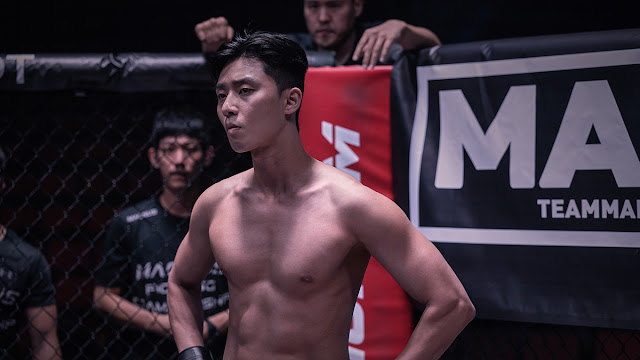 The surface of The Divine Fury is all about tussling with various agents of darkness—one in particular, the nefarious owner of a hedonistic night club, Ji-shin (Woo Do-hwan, Operation Chromite). He has his hands in all sorts of scaly business. But the heart of the film uses demonic horror trappings and Christian imagery as a means to explore faith, specifically the loss and rebuilding of said faith, in people as well as a higher power.

In the aftermath of trauma, Yong-hu finds himself in that common place of questioning God’s plan, especially when it appears arbitrary, cruel, and without purpose. That rage, acquired as a child, fuels and consumes him as an adult, inside of the ring and out. As a shaman tell him, he’s “covered in demons.” This angry fire inside leads to temptation from the darkness, quiet voices in his ears, mimicking his own voice no less, that whisper to submit to his impulses. 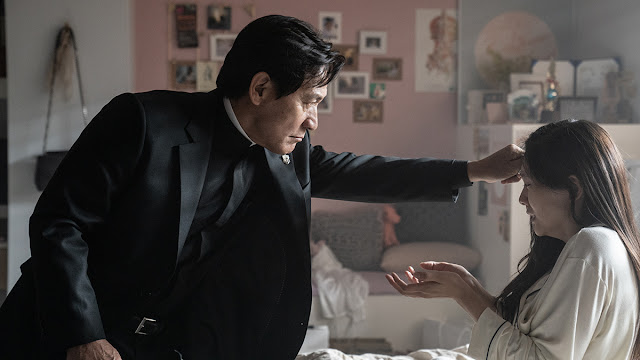 Park may be relatively young in his career, but he handles himself in fantastic fashion here. He has a strong grasp on the physical and action side, but also sells Yong-hu’s internal struggle, wrestling with competing influences, processing everything he sees and experiences, and evolving. There’s a great, earnest chemistry between Park and Ahn, as the priest comes to fill a father figure role for the young fighter. Their relationship sits at the center of everything else.

Most importantly, Kim, who also wrote the script, doesn’t rush and provides enough space for all of these threads and themes to breathe and develop. It would be easy to rush through Yong-hu’s young years or hustle from one scene of action-tinged horror to the next. Instead, Kim lingers in the quiet moments of down time in between and allows for the kind of character work that many movies of this ilk—particularly talking about American movies in this style—give short shrift. The Divine Fury, and the high-tempo and scary bits, carry that much more weight and impact as a result. The stakes are much higher, the motivations more defined and clear with this level of investment and elaboration. 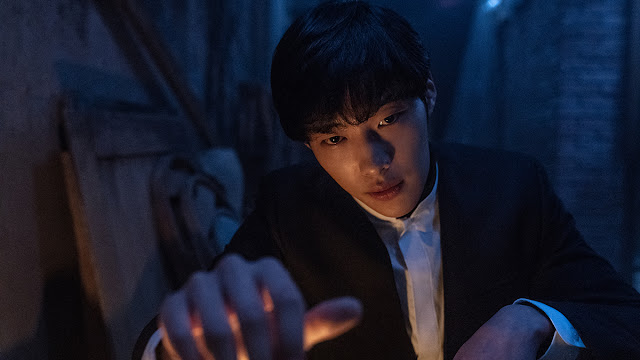 Even when we first meet Ji-shin—as a seedy criminal type attempt to extort protection money from his club, lest it have an “accident”—the film takes the time to develop his evil. He doesn’t simply do big things that serve as cinematic shorthand for “bad guy.” Over a long scene, we witness what he’s truly capable of and the depths of his connection to the darkness. And it doesn’t hurt that Woo, with his fierce eyes and sharp smirk, practically screams villainy; he can just exhale and squint and give you chills.

Religious iconography peppers the film. Crosses and crucifixes abound, serpents form a ubiquitous presence, and holy water flows like regular water. The script contains plentiful allusions to various saints. Ji-shin even named his club Babylon, which Christians often use as a symbol for evil and corruption, and has often been linked to Lucifer and the Book of Revelation. It’s a place of darkness, sinister impulses, and unchecked debauchery. 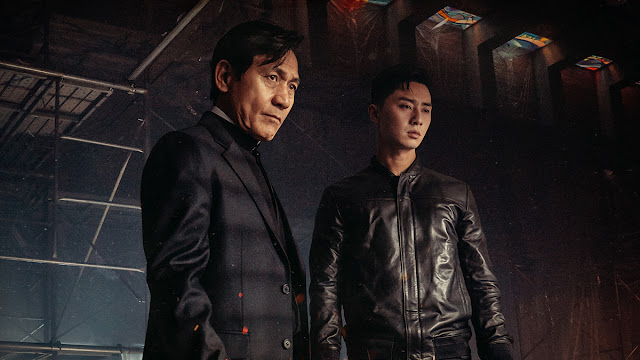 Plenty of exorcism movie tropes are also preset and accounted for. If you imagine vomiting, children speaking in much-too-deep voices, and levitation, you’re not wrong. While Kim uses these and other familiar devices, he never leans too heavily on them, and the whole package is slick and stylized. The brilliant, glitzy Seoul cityscape figures prominently into the visual aesthetic, and cavernous blacks and deep reds cut through the frames, contrasting with moody blues. Mechanically, it’s a sharp, clear, clean film in the way so many South Korean genre offerings are.

Not as wall-to-wall action as the likes of Blade or Underworld—and better for it, especially in that last case—The Divine Fury blends action and horror into an enthralling ride. The plot may not be wholly original or go any unexpected places, but the characters and intrigue do enough to carry through. It’s strange and creepy and legitimately scary, and you can see potential for future installments if there’s interest. And if Park Seo-jun becomes a huge international star, action or otherwise, you definitely won’t hear me complain.

Posted by Brent McKnight at 8:41 AM