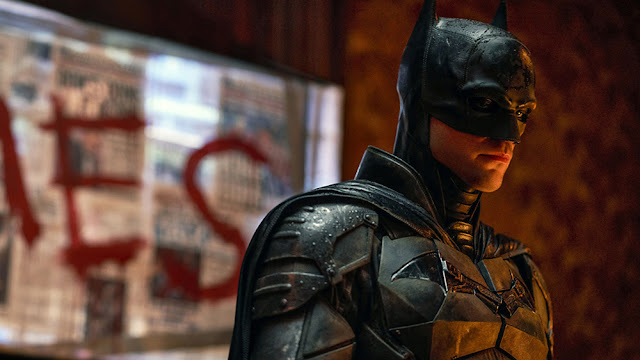 If Christopher Nolan’s Dark Knight movies were a tad too upbeat, festive, short, and well-lit for you, don’t worry The Batman is here to rectify all that. Directed by Matt Reeves (Dawn and War for the Planet of the Apes), the latest tale of Gotham’s Caped Crusader is a lot of movie—in terms of runtime, in terms of storylines, in terms of plot, and brooding, and fistfights, and set pieces, and… Some of which works well, some of which never comes together in a satisfying way.

Robert Pattinson (Good Time) plays this iteration of everyone’s favorite billionaire orphan crime fighter and is especially glum. This isn’t Christian Bale’s public playboy Bruce Wayne persona, Ben Affleck’s elder statesman of Gotham take, or even Michael Keaton’s pillar of metropolitan society. Younger than previous incarnations, this Bruce Wayne skews closer to the tragic death of his parents; he’s depressed and angry and basically a recluse when not on the streets dressed like a bat pummeling bad guys.

It’s an intriguing era for the character. This Batman has only been at the game a couple of years, and though he has enough of a connection with not-yet-police-commissioner Gordon (Jeffrey Wright) to have a Bat-Signal, and has built himself into something of an urban legend amongst street level criminals, he’s more of a boogeyman to whom those higher up the underworld food chain don’t pay much mind. Yet. Both Bruce and the Batman are very much in the process of growing into themselves. When a theatrical serial killer, The Riddler (Paul Dano—his identity isn’t revealed until late in the movie, but since the marketing has given this away, it’s fair game), starts offing corrupt Gotham City officials and reaching out to the Bat via a series of cryptic puzzles, he draws Batman into a sadistic, expansive mystery.

[Related Reading: 'War for the Planet of the Apes' Movie Review'] 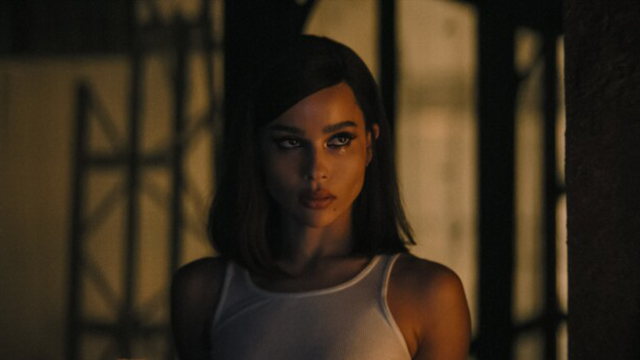 The Batman unfolds primarily in two storylines. One sends Batman into the seedy depth of organized crime, graft, and corruption in Gotham. He encounters the likes of the enigmatic Selina Kyle (Zoe Kravitz), better known to fans as Catwoman, a nightclub waitress with a unique set of skills and her own vendetta; Oswald Cobblepot, aka The Penguin (an unrecognizable Colin Farrell); and crime boss Carmine Falcone (John Turturro). This presents a layered mystery of lies and deceit where we see him employ the tools that earn him the “World’s Greatest Detective” moniker.

Though it’s initially the Riddler who sends him down this path, this line plays out relatively separate from that iconic villain. This thread occupies the bulk of the middle of the movie and should satisfy those who appreciate the more grounded-in-reality aspects of the hero. He follows clues, tussles with goons, and explores the deep shadows of the city and himself. It’s also where the film works best.

When this part wraps up, in a compelling, fulfilling way, the movie feels over, like it ended. Only there’s another act left to deal with the Riddler. Here there’s a decidedly more fantastic, comic-book tone and feel, more action and less mystery. The two pieces play very distinct and separate in their approaches and it leaves the impression of two movies cut together. Reeves, who also wrote the script, tries to keep Selina around, but while she was an integral part of the gangland story, she’s shoehorned-in and clunky when it comes to the Riddler side of things. It’s a jarring transition, and though full of strong action set pieces, plays much less interesting than the more investigative side of the film. 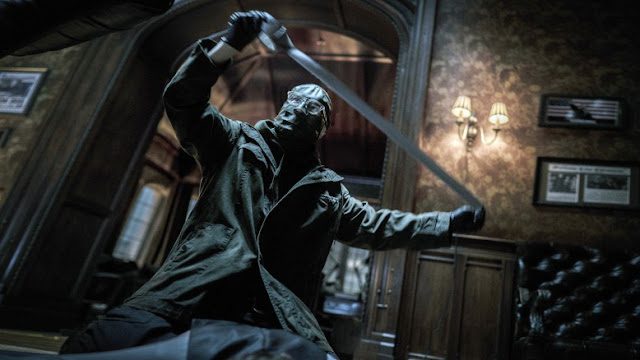 Again, Batman, especially the modern takes on the character, is known for being serious, even dour, and Robert Pattinson and Matt Reeves take that up a notch, maybe a few. Even when not in costume, Bruce Wayne is all doom and gloom, tortured and haunted and wearing heavy black eye liner. Pattinson does what he can, but as written the character plays pretty one-note, all clench-jawed rage and steely resolve with little nuance or texture. This works well when he fills the hard-boiled detective role, but it doesn’t offer much in the way of emotional hook, even when the story brings his dead parents into the fray. Physically, Pattinson does good work, handling the fights as well as presenting an air of dark terror looming in the dark.

This is also definitely a different take on the Riddler than we’ve seen on screen before. We’re not talking about Jim Carrey chewing scenery in a green unitard. This is tactical psychopath Riddler. (Similar to have some speculate Heath Ledger’s Joker is a veteran or former special forces, it feels like there’s more background to Dano’s take than we’re given in the movie.) He’s a brilliant strategist, orchestrating an elaborate ploy, but also adept at psychological manipulation, as comes into play at the climax. Additionally, he has skills that very much resemble military attributes. Dano does well with limitations put on him—Riddler’s identity isn’t revealed until way late in the game, and he spends most of The Batman in a mask. Still, he’s able to get his point across as both a frothing madman but also a meticulous puppet master.

Zoe Kravitz gives us a nice interpretation of Selina Kyle. She shifts from sultry and alluring to no-nonsense and driven in a blink when necessary, balancing Catwoman’s seductiveness with her capabilities as a thief and fighter. The film also gives her space to have her own fully rendered personality—she has multiple complex motivations, her own desires and aims, and a story beyond just how she relates to Batman. As a character, she’s honestly the most interesting, developed, and well-rounded of the bunch and I wouldn’t hate to see her in a solo movie. There is also a who’s who of familiar characters and actors around these key players. He doesn’t do anything we haven’t seen before, but Andy Serkis brings an earnest pathos to his role as Bruce Wayne’s trusted butler Alfred. Gordon could easily have played fairly rote here, but Jeffry Wright infuses him with a harried exhaustion. It’s still hard to believe Colin Farrell is the Penguin. Sheathed in elaborate prosthetics, he’s absolutely another person, playing the villain as a kind of proto-Scarface that’s both campy and frightening. Turturro’s Falcone oozes a slimy menace one expects from a major crime boss.

Aesthetically, The Batman is dark, even for a Batman movie; Gotham is gritty and squalid, even compared to previous renderings. It’s always raining, somehow always feels like night, even in the middle of the day, and there are some poorly, poorly lit interiors. Reeves and cinematographer Greig Fraser (Dune, Zero Dark Thirty) feel like they’re cribbing from David Fincher, particularly Se7en, which hits the tonal mark they’re going for. And even if the film does overplay this hand at times, they employ this darkness to good effect—it never becomes muddy, they use it to play with expectations visually for the characters and the audience, and it allows them to do interesting things composition wise and with reveals. It’s thrilling to watch Bruce and Selina stalk prey through the constant downpour, or see Batman emerge from a cloak of shadows and attack. One of the coolest moments, visible in part in many trailers, is when he fights a bunch of goons in the darkness, lit only by the staccato punctuation of muzzle fire, like a vicious strobe light.

Somewhere in The Batman there’s a two-hour movie I love. Or honestly maybe even two pretty damn good movies. But it’s a lot of movie in an unwieldy way. With parts that don’t always weave together in satisfying fashion, it frequently sags under heavy weight, and by the end you feel every last moment in your exhausted bones. [Grade: B-]