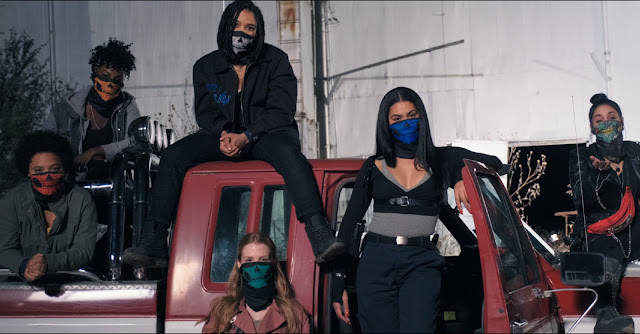 Some films approach social issues with nuance and insight, offering carefully crafted critiques that address difficult problems through close examination and intimate conversation. Writer/director Eamon O’Rourke’s debut feature, Asking For It, is not one of these movies. No, this movie is as sharp as a sledgehammer, smashing through walls and breaking in doors with a scream and a Molotov cocktail. A toxic-masculinity-skewering saga of feminist retribution, at times this approach is incredibly effective, carried much of the way by a fantastic cast, while in others it’s clunky and ham-fisted.

Asking For It falls into the broader category of rape-revenge films, giving 1970s exploitation a modern-day renovation, aesthetically as well as tackling the issues of today. (To be fair, the underlying issues haven’t changed much over the decades, it’s just a new iteration of the same old shit.) This doesn’t aim for delicacy, preferring blunt knocks upside the head to in-depth analysis. 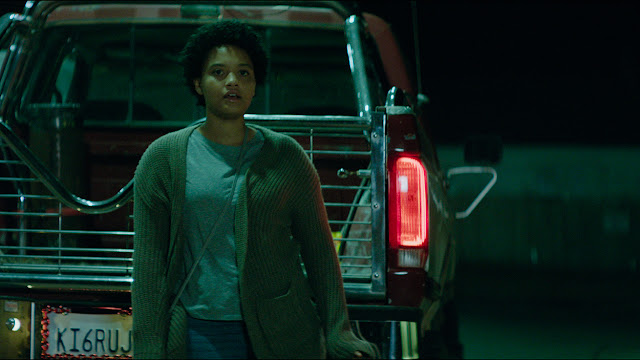 Joey (Kiersey Clemons, Hearts Beat Loud) lives an idyllic life in a small, idyllic town. All of that changes in one fell swoop when an acquaintance drugs and rapes her. This one action strips away her sense of safety, her sense of self, any happiness she had, and indelibly alters how she sees and interacts with the world. When she meets Regina (Alexandra Shipp, Tragedy Girls), she falls in with a group of women led by Sal (Radha Mitchell, Pitch Black) and Fala (Casey Camp-Horinek, Reservation Dogs), a kind of underground feminist militia bent on retribution. Their main target is a group of internet incels and men’s rights activists led by former pick-up artist-turned-alt-right-figurehead Mark Vanderhill (Ezra Miller, Justice League).

Asking For It does certain things well. It nails the depiction of the villains, capturing their pseudo-fascist imagery, chest-thumping alpha male rhetoric, and even Vanderhill’s evolution from internet scam artist to frothing male-supremacy dickbag. This all plays eerily true-to-life, uncomfortably so for anyone who spends much time on the internet. Is it over-the-top? Yes, but so is much of the real-life inspiration. 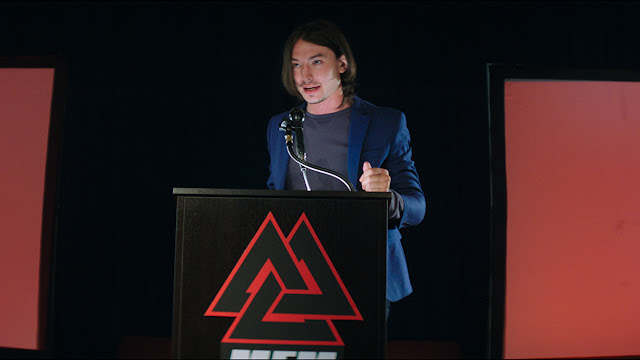 It also portrays Joey’s reaction to her assault, her near-instant transformation from happy-go-lucky young person to hollow, damaged, and angry. The film often employs a frenetic, rapid-fire editing approach—not to be too old-man-yells-at-cloud, but it feels very millennial—which has an up and down effect. It works best, however, in this instance, when the film dramatizes Joey’s post-assault, pre-girl-gang life. Shutting part of herself off, she’s numb, drifting blankly through her days, one the same as the next, never feeling anything, a flatness punctuated by flashes of rage and fears as the trauma violently breaks through. When the film uses a hyper-kinetic cutting strategy here, it’s jarring and disorienting, but to an effective end, whereas in other instances, the hyperactive editing winds up jarring and disorienting in a distracting, off-putting way.

While Asking For It visually portrays Joey’s mental state, most of why it succeeds is due to Clemons, once again proving to be one of the best actors of her generation. She’s lost and sad, outraged and eager for retribution, turning inward and lashing out; it’s a powerful, textured performance that encapsulates everything Joey endures. To be honest, most of where the film succeeds in a grander sense is because of Clemons and Shipp. Whereas Joey is wounded and unsure, Regina is the opposite, never hesitating or wavering for a moment from what needs to be done. She’s driven and confident, everything Joey wishes she could be, and Shipp hones her swagger to fine, cool-as-hell point.

[Related Reading: This Brutal 'Revenge' Trailer Lives Up to the Name] 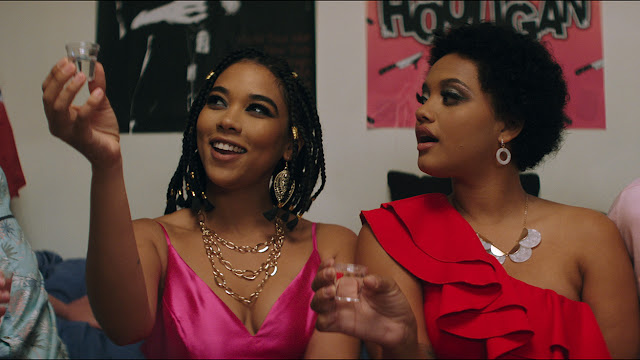 The rest of the cast does solid work, though many of the characters are left underdeveloped. Miller embodies the butt-hurt rage of an aggrieved man who exists solely in an internet echo chamber of YouTube videos and chat rooms, though the character never aims to be more than a caricature. His mirror image shows up in the form of Beatrice (Vanessa Hudgens, Spring Breakers), the opposite extreme, with nothing but brutal vengeance on her mind at all times, pushing further and further. Hudgens clearly relishes biting into this role, though as written, the part plays a single note. Luke Hemsworth shows up as a good-hearted sheriff who shares a past with Sal—he’s the “not all men” portion of the program—while David Patrick Kelly arrives as a finger-tentingly-evil small-town cop.

The plot scatters and makes choices that distract from the main narrative and thematic momentum. In the middle, the gang takes a side trip to teach some frat boys a lesson, there’s a human trafficking subplot that’s both underdeveloped and shoehorned-in, an attempt to create bigger stakes when what’s there is plenty. Not to mention an odd turn in a proto-Dickensian youth squat. O’Rourke clearly has a lot he wants to say and cover, but most of this plays like thrown-in filler that’s never developed or fleshed out enough to matter or leave much impression. In true exploitation fashion, it all builds to a big, violence confrontation that’s a grueling blast, but so much that comes before is jumbled and all over the place. 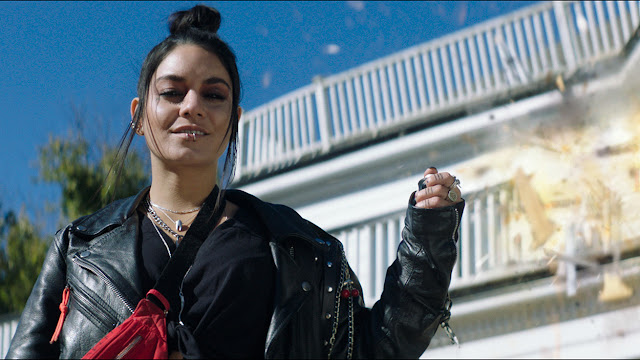 With Asking For It, O’Rourke clearly aims to synthesize a grindhouse style and approach with a progressive social conscience and righteous rage. Many of the films it cribs from do have feminist undertones, even if inadvertent at the time, or at least have those interpretations—there’s a lot of great writing on this subject from much smarter, more insightful people. But in this instance, while it works well in certain instances, it misses every possible mark in others. The result is a promising, intriguing, but wildly uneven movie, even if I do wish there was a national underground network of armed feminist avengers waging war on the patriarchy. If nothing else, Asking For It is a big swing, and I’d much rather see that every time than something safe, bland, and toothless. If nothing else, this marks an intriguing beginning for O’Rourke as a filmmaker. [Grade: B-]