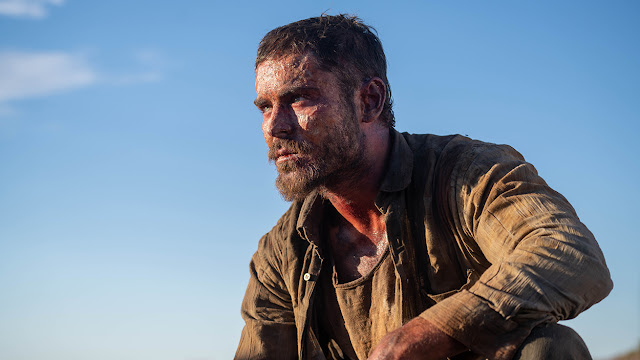 To call writer/director (and actor) Anthony Hayes’ Gold minimal is a bit of a stretch. Minimal is an overstatement. There are seven acting credits. Of those seven, two are the same person playing different roles. Three appear on screen for one scene each. Of those three, one is a baby and another is a woman with no lines. The bulk of the movie is Zac Efron alone in a post-apocalyptic desert gradually losing his mind, and all things considered, Hayes squeezes a great deal out of this arrangement.

In a bleak, somewhere-beyond-dystopian future, a Drifter (Efron) looking for an opportunity, any opportunity, hitches a ride with a Man (Hayes) to an outpost where there may be work. When their ramshackle truck breaks down in the middle of nowhere, they discover a massive gold nugget. It’s really more of a gold boulder, since they can’t even get it to move. When the Man goes to get tools to retrieve their prize, Drifter remains behind on guard duty. 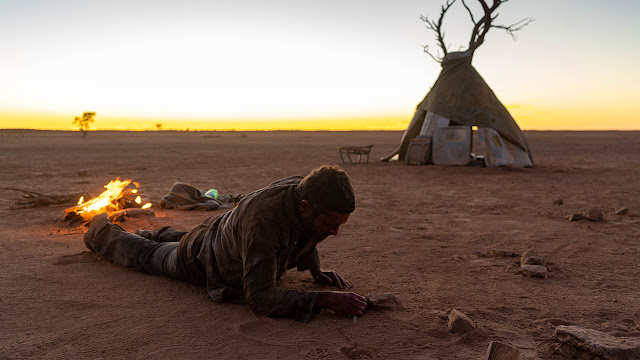 That’s it. The movie is Zac Efron sitting in the sand, supplies dwindling, his situation going from bad to worse to damn, trying not to die or come unglued. And it’s no easy task. There are packs of starving feral dogs, scorpions, dehydration, starvation, strangers, exposure, paranoia, and a host of other factors, all trying their level best to end him. That doesn’t even account for  the mental strain, the solitude, desperation, lost hope, and paranoia. Which also threaten to do him in.

This is Efron’s movie to carry and he does an admirable job. Physically, he’s suitably scruffed up and grubby, and that’s just to begin with. He starts out filthy, but by the end he’s covered in flies, vicious blisters, and layers of grime. A quiet character even when there are other people around, left alone, Drifter starts to fray, then unravel, and ultimately rip apart at the seams. It’s a drastically different role than anything we’ve seen from the former Disney star and he does solid work moving through these stages of disintegration. 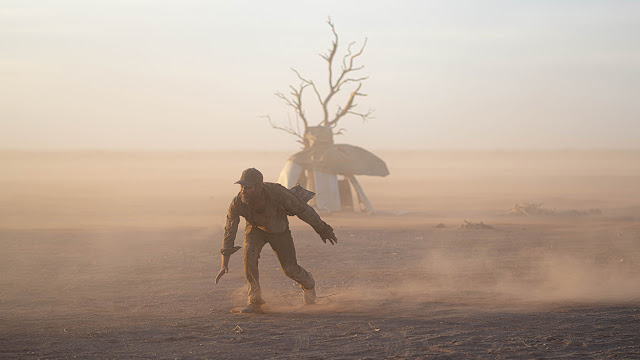 Though set and filmed in Australia, the whole setup is very American dust bowl, very Grapes of Wrath. After a vague economic collapse, likely caused at least in part by ecological decimation, people hit the road, drifting, hopping trains, looking for any hope and scraping by however they can. This is dismal and hardscrabble in every way. Hayes and co-writer Polly Smyth take a sparse but purposeful approach to world building. They hint and allude, letting the audience imagination extrapolate from there to fill in the gaps and negative space.

The entire film looks and feels gritty. Sun-bleached and over-exposed, daylight shots are nearly blinding, while night looks like a heavy blanket of darkness hiding all manner of terrors. But even this desolate, barren landscape becomes hauntingly beautiful as cinematographer Ross Giardina (Catch the Fair One) lenses sprawling wide shot and expansive aerial takes. The outback locations look otherworldly, familiar but alien and the same time, and using happenstance, like shooting in an actual dust storm that erupted during filming, only drives home the isolation and peril. 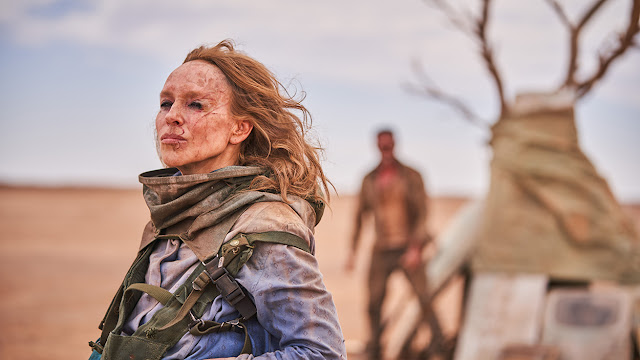 Gold is a bleak movie that manages to sink deeper and deeper into hopelessness at every step. It plumbs depths of human misery and the lengths people will go to searching for any glimmer of hope. Drifter clings to this gold nugget like it’s a life raft, but in reality it’s an anchor dragging him to his death even as he refuses to let go. Chasing something so precious, he may lose the most precious thing of all, his life. It often begs the question: is Drifter dumb, greedy, or desperate? The most realistic answer is he’s a bit of all three.

Because the story is so spare and minimal, there are times where it stretches perilously thin. And the idea of a dog-eat-dog world is both bluntly metaphorical and very, very literal. Fortunately in these moments, Hayes and company have something horrible in their pocket to throw at the protagonist to distract our attention and push things forward. Though admittedly, the effectiveness of the “what now” conceit also erodes over time. 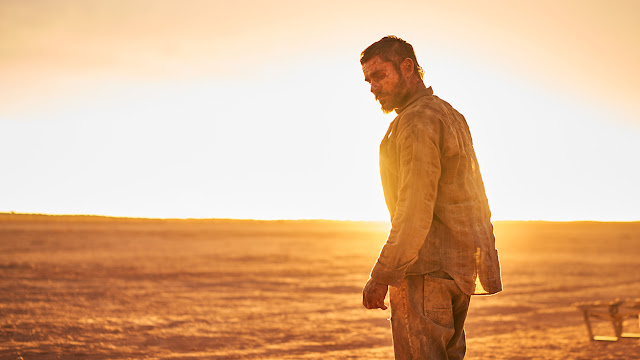 Though it won’t blow anyone away, Gold plays something like Mad Max as an austere survivalist drama, a one-hander about a man unravelling alone in the face of nature. Whether or not the methodical deconstruction of a human psyche says anything compelling is up to the individual viewer, but it’s a tight, even tale and an entertaining watch. [Grade: B]