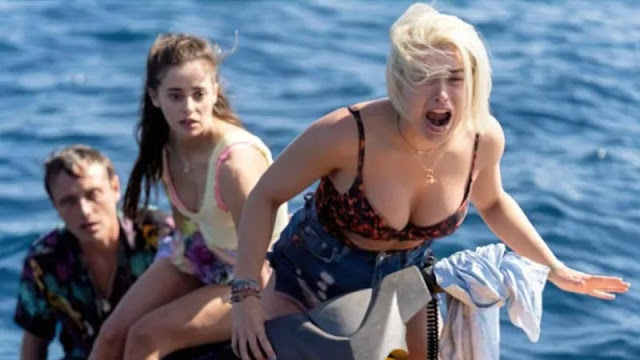 A group of college friends on a drunken spring break excursion “borrow” a pair of jet skis for a fun, alcohol-fueled jaunt into unfamiliar waters where no one knows they’re going. What can go possibly go wrong? The answer in Shark Bait, the latest from director James Nunn (One Shot), is everything. They have an accident, their transportation breaks down, and, of course, sharks.

Your mileage will definitely vary when it comes to Shark Bait. It never veers from the playbook or does anything unexpected, and it sags in the middle where such survival tales often do. While the actors, fronted by Holly Earl’s Nat, do a passable job, there’s not a ton of meat to their characters—though the script from Nick Saltrese (A Prayer Before Dawn) piles on interpersonal tensions and secrets between the friends to add a layer of friction to the proceedings between being stranded at sea and becoming shark food.

This is definitely not my favorite James Nunn movie, but it is cool to see him do something outside of his usual tactical-action wheelhouse. And he squeezes as much as possible out of a minimal set up. There are five actors who have more than one scene, and that number gradually dwindles as one-by-one they become gory chum, and the bulk of the film takes place on a single jet ski. That’s damn bare bones.

Shark Bait is exactly the movie it looks like, for good and ill. It’s not the best of the man-versus-shark genre, but it’s reasonably entertaining if you’re in the right frame of mind, knows what it is, and what it does best. It also has the good sense to largely stay away from dodgy CGI sharks except when absolutely necessary and clock in realistically at around 81 minutes. [Grade: C+ but like a fun C+]

Posted by Brent McKnight at 9:32 AM