Doctor Strange in the Multiverse of Madness now has the distinction of being my least favorite chapter of the Marvel Cinematic Universe. It’s a plodding eyesore overflowing with shallow expository dialogue in lieu of narrative development. Stephen Strange (Benedict Cumberbatch) continues to be the least interesting Avenger, and even another strong performance from Elizabeth Olsen as Wanda Maximoff/Scarlet Witch can’t save the day. And the one moment I really enjoy, admittedly for petty personal reasons, I can’t talk about because it’s a major spoiler.

In the wake of Spider-Man: No Way Home hammering on the concept of multiple realities, Multiverse of Madness takes that idea and runs with it. Through a series of events, the former surgeon finds himself looking after the young America Chavez (Xochitl Gomez), a spunky, universe-hopping moppet. He enlists the help of a post-Wandavision Wanda, who has her own vested interests in America’s powers, and goes on an dimension-spanning adventure across, you guessed it, the multiverse, in Marvel’s desperate attempt to make the events of What If…? relevant in a big picture sense. 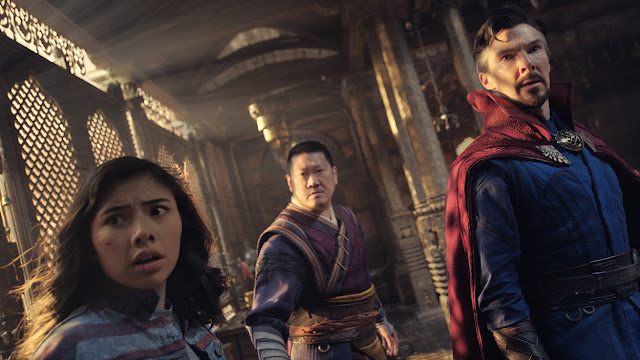 We can’t get into it too much detail. (The official Disney handout given to press members ahead of time specifically asks us not to talk about a laundry list of things, including “character developments,” which is hilarious.) But Multiverse of Madness drives home a lingering issue: Strange may be powerful, but he continues to be one of the least compelling of the MCU’s major player. Cool, cool, another rich, cocky, white guy who overvalues his own intellect and contributions and continually has to learn and re-learn the same lesson about hubris every time out. Didn’t we do that with Iron Man for more than a decade? (And, of course, the first Doctor Strange?) It’s old, rehashed, and we’ve been here many, many times before.

There’s some fun eye-candy, like a big, one-eyed, many-tentacled interdimensional beasty Strange tussles with early on, and director Sam Raimi steers into the horror skid, which I appreciate. (It does bum me out that probably my favorite filmmaker who has ever helmed an MCU movie turned in the one I like the least.) Multiverse of Madness definitely peaks when Raimi lets loose and gets to indulge his own proclivities—it’s obvious he cares much less about the source material and overall gameplan than the studio, which leads to a whole slew of other problems. (Read this far more insightful and knowledgeable take on issues with how the film adapts America from the comics—there’s sures to be much discussion on this down the road.) But even when he goes all-out, the film still ultimately devolves into a big, messy CGI blippity bloop of a climax like in every other superhero movie—ymmv depending on how you feel about those, but it’s a busy, blurry time for sure. 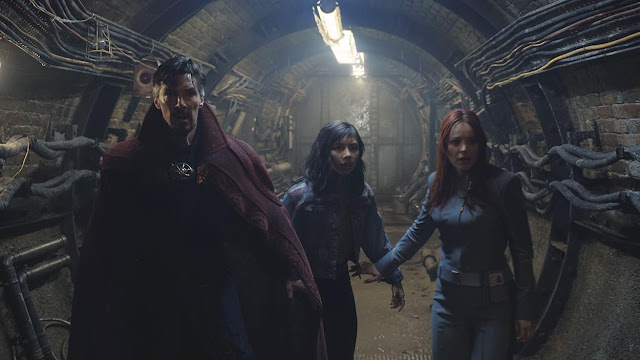 Even occasional bits of Sam Raimi-infused horror fun and another stellar Elizabeth Olsen performance (even if, IMO, they do the character pretty dirty) aren’t enough to right the lilting ship of Doctor Strange in the Multiverse of Madness. It’s flat and undercooked, fraught with overly convenient explanations, and from the jump makes questionable decisions at almost every turn. For those of us who wondered where Marvel was going to go post-Avengers: Endgame, this doesn’t bode well for the future. More than any of their other offerings, this feels like scrambling to make something work.