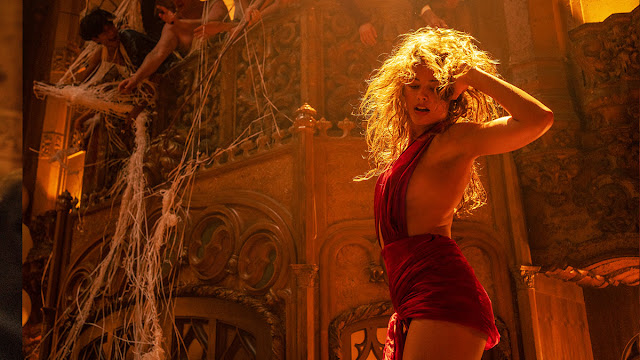 Damien Chazelle’s latest opus, Babylon is a lot of movie. It might be the most movie of any movie of the year. At three-plus hours it’s a bloated and overflowing; an ode to  Hollywood excess that is, in itself, a Hollywood excess.

Instead of a traditional review—don’t worry, there are already plenty of those floating around the world—what follows is a random collection of things I wrote down while watching the film in question. Some are (almost) fully formed thoughts, others are barely coherent sentences. Just a heads up, there won’t be a ton of details or information to be found, but again, that’s all out there if you’re so inclined.

That said, here we go:

Damien Chazelle wishes he could hold Baz Luhrmann’s jock when it comes to cinematic tales of debaucherous excess. Baz wallows in the excess and emptiness, DC thinks he has something to say in his hollow empty excess.

I do enjoy unchecked ego driven narcissism in my cinema.

[Related Reading: 'Once Upon a Time in Hollywood' Movie Review]

Did Damien Chazelle just lift a bit from an Adam Sandler movie? (Note: He directly apes the donkey diarrhea scene in Ridiculous Six, only with an elephant. Within the first few minutes.)

There are more cast members from Wu Assassins than I expected. (Note: That number is two. Li Jun Li plays a stand-in for Anna Mae Wong in a thankless role, while Lewis Tan can be seen in the early party scene for a single shot. It’s easy to wonder if there was perhaps more with both of them, as the film is rumored to have cut the bulk of POC characters’ screen time from the script.)

How are there still two hours left? And why?

Babylon pinches the scene from Once Upon a Time in Hollywood where Margot Robbie’s character watches her own movie in a theater. Damn near shot-for-shot.

Gets up its own butt/in its own way when it gets serious about being a “love letter to Hollywood” or “descent into hell,” or whatever. Just be wild and revel in the filth, that’s the best part. But any early momentum, just…blop as the movie faceplants into tedious, self-important doldrums.

Shits the bed for at least a solid hour, but then picks up into absurdity again for just one shining moment. Until it poops all over itself again.