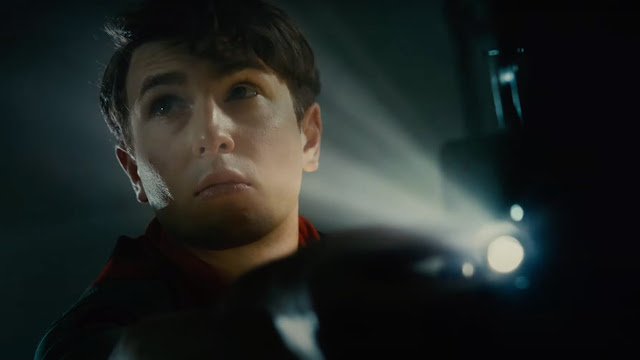 As 2022 winds to a close, what better time to look forward? This year has been another fantastic one for film. (People who decry any year as a bad movie year blows my mind, because there’s never been a year I didn’t see a ton of movies that blew my mind.) And there’s so much in store for us in 2023.

With that in mind, I compiled a list of the movies I’m most excited to witness in the upcoming months. As usual, some of these will be great, others will be awful. Hell, as is my tradition, there will be some I never get around to watching. Real life has a way of intruding, doesn’t it?

Also, like every year, there are bound to be dozens of movies that absolutely ruin me that aren’t even on my radar yet. There are constantly indie horror movies and DTV action flicks popping up, and festivals always unearth a slate of must-see pictures throughout the year. That’s a massive part of why I love this, there’s always more to discover.

And this list doesn’t even account for the oncoming slew of great TV we have on the horizon. A new season of Warrior has me all kinds of giddy, as does the Issa Lopez helmed, Barry Jenkins produced, Jodie Foster starring season of True Detective. Among many others.

[Related Reading: The 50 Most-Anticipated Movies of 2020]

Even beyond 2023 there are so many movies to be jazzed up about. We have a new Bong Joon-ho film on the way, but sadly not until 2024. Somehow, however, I feel like we’ll be okay in the meantime.

All farting around aside, let’s get down to business. Here are my 50 (ish) most-anticipated movies of 2023. I list release dates for the ones that have them, but take them with a grain of salt. If living in a constant pandemic has taught us nothing, it’s that movie release dates often change at the drop of a hat.

If you feel like it, drop a comment with the titles you’re most excited about in the coming year. See you all at the movies.

I sure hope I don’t need to see the first two to understand this one. Bad joke aside, any movie about a creepy childlike murder robot who dances is sure to be a movie I will watch.

Short, simple, to the point title. Gerard Butler leading an action movie about a group of plane crash survivors on an island battling militants. I may have written this in my sleep and simply forgotten I did so.

Honestly, I know very little about this festival favorite indie horror film except for the rave reviews from folks I trust on these matters and claims that it’s one of the most truly frightening films to come along in quite some time.

There’s Something Wrong With the Children-January 17

Spooky killer children in the woods. I’m an easy sell and that’s all I need. Also, I’m a fan of Roxanne Benjamin’s previous work, so, double sold.

Dystopian cyberpunk from the director of Train to Busan? Yeah, into that.

Brandon Cronenberg’s latest was actually on my 2022 most-anticipated list, but better late than never. It looks dark and twisted and full of the warped body-horror that seems so prevalent in the Cronenberg gene pool. And Mia Goth going off the deep end.

Paul Tremblay’s novel, The Cabin at the End of the World, which is the source material for M. Night Shyamalan’s latest, is the single most tense book I’ve ever read. Can’t wait to see how it translates to the big screen.

Perhaps the most unlikely sounding franchise in existence, this time Steven Soderbergh takes his good-natured male stripper across the pond to grind up on Salma Hayek in a Vegas-style revue. We are truly living in a blessed time.

Christopher Landon, the director behind Freaky and the Happy Death Day movies, returns with a movie starring David Harbour and a ghost. Done deal.

A Rocky movie, no matter how tangential a Rocky movie, always has my attention. And the first two Creeds are good, so there’s that.

If they keep making these, I’ll keep watching them.

Adam Driver stranded on a hostile world protecting a small child. Then the dinosaurs show up.

At this point is there any way this wouldn’t be one of my list of most-anticipated movies of any given year? The additions of the likes of Donnie Yen and Scott Adkins only sweetens the deal that much more.

Nicolas Cage playing Dracula. Also, the photos of him on the set look insane.

I don’t love the last Evil Dead as much as many, nor do I hate it as much as others. Still, an Evil Dead movie in the year of our lord 2023 is something I’ll need to watch.

Sure, the last couple haven’t been good (the franchise misses Paul Walker as the emotional core), but at this point I’ll watch just to see how they attempt to one-up the previous chapter’s inane, insane nonsense.

I may not be the biggest Little Mermaid fan in the world, but any movie that makes racists this mad is one I’m going to support.

Indiana Jones and the Dial of Destiny-June 30

Mean-spirited, knuckle-headed tactical action. I’m here for it, especially because this type of movie doesn’t often get made at this scale anymore.

The same thing I said about John Wick 4 goes for this. Simply one of the best American action franchises currently going, or likely ever for that matter. And with all those videos of Tom Cruise doing increasingly insane stunts, I have to wonder if maybe director Christopher McQuarrie is actually trying to kill Cruise but is playing a really long game to make it look like an accident. Just a theory.

Who knew we’d all be totally psyched for a Barbie movie in 2023? I guess all it took was Greta Gerwig and the helm, an incredible cast, and a banger of a trailer.

This is about the only way I can imagine getting excited for a movie about J. Robert Oppenheimber. I’m not even a huge Nolan acolyte, but you have to be curious.

Is The Meg great? No. Is it good? Ish. But Jason Statham fighting a giant prehistoric shark is an effective logline that will get my butt into a seat.

I love Denzel as an aging badass just wrecking goons.

Kenneth Branagh’s continuing attempt to adapt Agatha Christie has been up and down, but I’m game for a slick studio whodunnit. Added bonus, this one also features Michelle Yeoh.

I’m mostly curious about this rather than excited. The 1973 Exorcist may be my favorite movie of all time, and David Gordon Green and company’s handling of the Halloween franchise has been…let’s say mixed. However it shakes out, this’ll be something to see.

Denis Villeneuve’s Dune was simply stunning, even if it is only half a film. But late this year we finally get the rest! (Totally worth using an uncharacteristic exclamation point.)

Aquaman and the Lost Kingdom-December 25

Honestly, this is the only upcoming superhero movie I’m excited about outside of Blade. But more James Wan candy-coated nonsense please.

No one knows what this is about, but after Good Time, the Safdie Brothers are on that list of I-will-watch-anything-they-do filmmakers. Add Adam Sandler to the mix following what this team did with Uncut Gems and I’m there day one. There’s a good chance this won’t drop in 2023, but fingers crossed.

Inventive lo-fi horror from the director of So Vam. I saw an in-progress cut and can assure you this is a wild time.

There’s not much information about this one, but the one fact I need to know is that Kim Jee-woon is at the helm. I’m good with that.

Joshua Oppenheimer went back-to-back with two of the most devastating documentaries I’ve ever seen, The Act of Killing and The Look of Silence. So, of course, his first narrative feature is a musical. A musical about the last family on Earth. One has to assume it’s not all roses and rainbows.

There’s really no other action director with chops like Gareth Evans. Maybe Timo Tjahjanto, but that’s the only other name even in the conversation. The Raid director returns with an action thriller about a grizzled cop fighting his way through a criminal underworld. And it stars Tom Hardy, Timothy Olyphant, Luis Guzman, Narges Rashidi, and a bunch of additional badasses.

If any member of the Cronenberg family makes a movie, I’m there. This marks Caitlin Cronenberg’s directorial debut. It’s a thriller. About a family dinner. Though this dinner involves a world coping with environmental collapse and a voluntary euthanasia program that likely won’t end well. Also, I adore Emily Hampshire.

Killers of the Flower Moon

David Fincher getting back to making the artsy pulp films is good news. This time out he adapts a graphic novel about an assassin who grows a conscience. Fertile ground for him to plumb the depths.

A rough-trade actioner about a former soldier turned underground fighter. Starring a who’s who of DTV royalty like Scott Adkins, Frank Grillo, and Juju Chan, among others. This may have been made specifically for me.

X and Pearl both wound up on my best of 2022 list. So obviously Ti West’s third installment is at the top of the list of movies I’m foaming at the mouth to see.

I honestly don’t know much about this Sundance horror film, but it sounds like a twisted, tormented genre love story, and I am here for that.

Marielle Heller has a knack for capturing raw, beautiful moments of humanity in her films. And her latest follows a stay-at-home mom (Amy Adams) who thinks she’s turning into a dog. You can’t help but be intrigued.

The latest comedian to dive into the horror pool, The State and Brookly Nine-Nine vet Joe Lo Truglio makes his directorial debut with Outpost, about a woman in the woods fighting a losing battle against demons.

Knives and Skin director Jennifer Reeder returns with a horror yarn that she describes as an “exploration of youthful chaos.”

A Yorgos Lanthimos movie about a young woman, played by Emma Stone, brought back to life by a mad scientist. What don’t you love about that?

Jeremy Saulnier’s Rebel Ridge has been on my most-anticipated list twice before. It’s giving Mad Max: Fury Road a run for i’s money in that regard. Among various troubles, the project lost its lead, so who knows when or if we’ll ever see it. Still, a Saulnier movie that “explores systematic American injustices through bone-breaking action sequences, suspense, and dark humor” is something we hope to see this year.

Road House is one of my all-time favorite movies. Is a remake necessary? Not at all. But I can’t help but be curious what a Jake Gyllenhaal-starring version looks like. Let’s all hope it turns out better than the Point Break remake.

A slow-burn psychological horror from the creative team behind Death Drop Gorgeous. With gnarly practical monster effects. Where do I sign up? (Cards on the table, I backed their kickstarter because this sounds and looks awesome.)

All I know about Time Cut is that I loved writer Michael Kennedy’s Freaky, so you better believe I’ll check out what he’s been working on next.

I’m a simple man, all I want is for Scott Adkins to play a twin out to avenge the murder of his identical brother.

The Zone of Interest

Jonathan Glazer hasn’t directed a feature since 2013’s Under the Skin. Will 2023 be the year that changes? In theory his adaptation of a Martin Amis novel is in post-production and could drop in the next 12 months. Then again, maybe it won’t.
Posted by Brent McKnight at 9:46 AM