'Pitch Perfect 2' Movie Review: The Bellas Take On The World 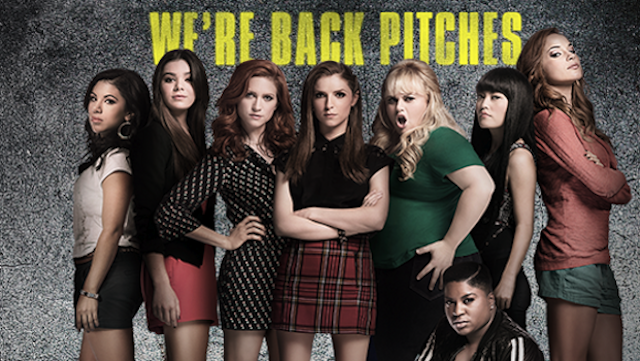 Aca-believe it or not, I am not the target audience for Pitch Perfect. Shocking, I know, that a bearded, overweight, pushing-40, action movie enthusiast with a ratty beard is not the intended viewer for a movie about a group of teenage a cappella singers. Weird, right? But that hasn’t stopped me from watching the first film somewhere in the neighborhood of 50 times (it’s entirely likely this number is much larger—there was a ten day period where I watched it everyday, and a month where it was at least 20 times—separate occurrences—so who the hell knows at this point).

If you guessed that I, target audience or not, am excited about Pitch Perfect 2, you are correct. And if you’re similarly stoked, I have good news to report, Pitch Perfect 2 is a damn fine time, one that should satisfy those obsessive fans among you (like the ones who feel a twinge of sadness when the Universal logo pops up in front of any other movie and the accompanying song is not rendered in a cappella—I know I’m not the only one).

Admittedly, Pitch Perfect is a better movie than Pitch Perfect 2 in a traditional, this is what a movie should be kind of way. Though it lacks the general narrative thrust and a little of the heart that makes the first movie so great, it’s still more than entertaining enough that you’re going to want to see it multiple times. 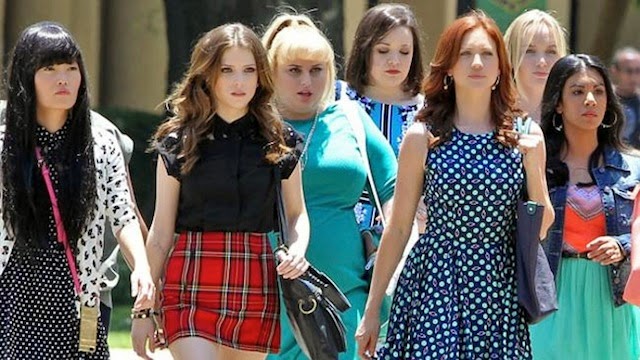 There’s not all that much story. This time around the Barden Bellas, now three-time national champs and the rock stars of collegiate a cappella, find themselves disgraced, thanks to Fat Amy (Rebel Wilson) accidentally flashing her junk at Barack Obama. The only way to regain their standing is to win the world championship of a cappella (which is a real thing that happens), a feat that an American team has never accomplished because the rest of the world hates us. Aside from that, on the verge of graduation, of embarking on the next step of their young lives, Beca (Anna Kendrick) starts an internship at a recording studio, hoping to finally live her dream of breaking into the music industry. That’s about what you get.

Pitch Perfect 2 has less of a plot than a string of gags and jokes, moving from one hilarious moment to the next. Like they had an idea for something funny Fat Amy could do, or they wedge in one of the new additions (Chrissie Fit) making a joke about having diarrhea for 7 years in Mexico (the constant running quips about how much life in Mexico sucks is easily the biggest problem with the movie, they’re awkward and tonally out of step with the rest of the humor). There’s very little interpersonal characterization going on, even with a fresh-faced new recruit (Hailee Steinfeld). The driving conflict is between the Bellas and a German aca-supergroup that is obvious and tired, even if their face offs do provide some fun lines for Beca and some sweet ‘90s jamz.

Again, if you have an already existing connection to these characters, the less than coherent way first time director Elizabeth Banks puts all the pieces together won’t particularly bother you. And there is an epic aca-throwdown that, while the reason for its existence is specious, is every bit as good as the Riff-Off from the first film. While overall it’s missing the warmth and camaraderie of the original, it’s not entirely absent, and when the girls go on a bonding weekend trip, their obvious connection shines through.

It may not be as solid or as complete a narrative as Pitch Perfect, but Pitch Perfect 2 is still destined to be a movie I watch dozens of times. Fun, engaging, and full of groups of talented performers singing pop songs I’ve (generally) never heard (except for a nice selection of classics), if you love the first film, you’re going to be more than happy with the follow up. [Grade: B+]

Posted by Brent McKnight at 9:52 AM

Pitch Perfect 2 is an enjoyable movie but I didn’t experience the same kind of boundless joy that I did with its predecessor.

Yeah, I definitely liked it, but you're right, it never reaches the same highs as the first. I'll still watch it a bunch times however.