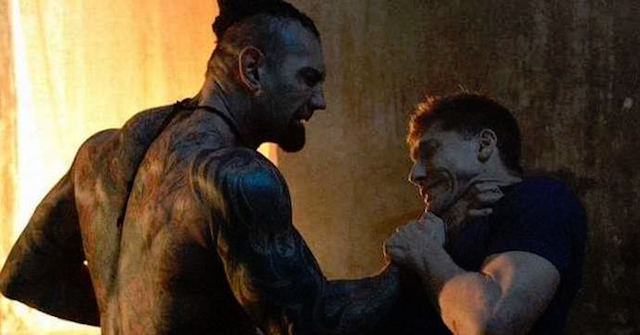 The long-awaited (at least by me) Kickboxer remake, Kickboxer: Vengeance, just debuted at the Fantasia Film Festival. To mark the occasion, there’s a brand new trailer to keep us occupied until the movie arrives on August 19. Watch it for yourself after the jump.

This trailer from Yahoo looks ultra serious, even with that silly, borderline S&M scene with Jean-Claude Van Damme. From the early reactions streaming out of Fantasia, it sounds like this rehash is every bit as cheesy, schlocky, and ridiculous as the 1989 original. And that makes it sound like a total blast and precisely what I wanted/expected.

Larnell Stovall handled all the stunt and fight choreography, and as his resume includes Undisputed 3, Universal Soldier: Day of Reckoning, and a ton of other awesome DTV actioners (as well as bigger pictures, like Captain America: Civil War), which bodes well for that side of the equation.

A remake, the plot of Kickboxer: Vengeance is beat-for-beat just what you expect. This time, however, Jean-Claude Van Damme has moved up in the ranks to become the master/guru who trains the hero, now played by Alain Moussi, who must avenge his brother against the evil Tong Po (Dave Bautista). The rest of the cast includes a bunch of real-life fighters like Gina Carano, Georges St. Pierre, Tyrone Woodley, Cain Velasquez, and more. And the acting looks like what you might expect from people who are paid to kick the hell out of each other as opposed to, you know, acting.

Here’s the official synopsis if you need more details:

Eric Sloane is a kickboxing champion at the top of his game. His older brother, Kurt, follows him everywhere as both his trainer and manager. Together, they’re unbeatable. When Eric is approached to fight Thai champion Tong Po, he can’t wait to finally prove to the world that he’s the one and true champion, even though his brother is against it. What was supposed to be a mere formality turns into a nightmare when Kurt witnesses Eric’s death. While the desire for revenge grows inside, he knows full well he’s no match for Tong Po. He therefore decides to track down his brother’s old trainer in the hopes of finally getting his revenge and, who knows, perhaps even becoming the new “Nok Su Kow” in the process.

Because nothing is ever just a standalone movie, even in low-budget DTV land, Kickboxer: Vengeance is the first in a purported trilogy. (Van Damme has already joined the follow-up, Kickboxer: Retaliation.) So we have a Kickboxer cinematic universe in the works, which is nice. Let's hope they all have a scene on par with Van Damme's dance in the original.

Kickboxer: Vengeance is set for release on August 19, which I assume means it will hit VOD platforms with maybe a very, very, very limited theatrical run just for kicks. Maybe. Fun fact, director John Stockwell, who has helmed the likes of Blue Crush and a made for TV movie about Seal Team Six, also played Cougar in Top Gun.
Posted by Brent McKnight at 11:24 AM