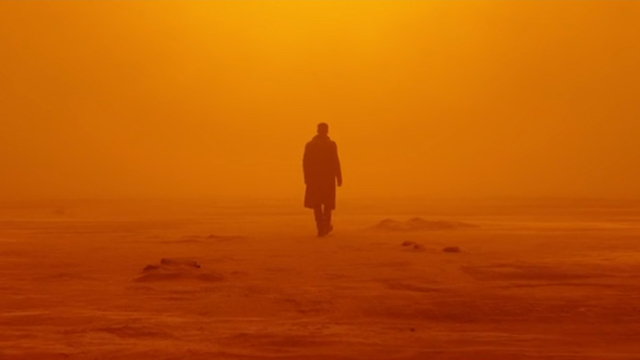 Okay, I’m going to come right out and say this: Denis Villeneuve should only make science fiction movies from now on. Arrival is going to land very near the apex of my top movies of 2016 list, and though it’s less than two-minutes-long, the first trailer for the long-in-the-works Blade Runner 2049 looks spectacular.

Last week was full of rumors we might see our first look at Blade Runner 2049 as early as this week, and when we heard early, Warner Bros. meant early. This is a hell of a way to kick off a week. Normally I’d say something about how long-gestating sequels like this are a dicey proposition (Independence Day: Resurgence is still a fresh wound for many), but I am so on the hook for this.

Full of stunning imagery, creeping atmosphere and tension, and Ryan Gosling walking through a desiccated wasteland in a trench coat, this just gives us a taste. Celebrated cinematographer Roger Deakins lensed the film, and his input is readily apparent. In the 30 years between the 2019 of Ridley Scott’s 1982 original and 2049, things have obviously taken a drastic turn—the world’s a whole different kind of messed up now—and it looks like Harrison Ford’s Rick Deckard pulled a Luke Skywalker and absconded.

This makes sense, given that the word on the street is that Ford is only in the movie for a short time and that he might not even show up until the third act. And though we see him in this footage, his absence also jibes with the first official plot synopsis that also dropped today:

Thirty years after the events of the first film, a new blade runner, LAPD Officer K (Ryan Gosling), unearths a long-buried secret that has the potential to plunge what’s left of society into chaos. K’s discovery leads him on a quest to find Rick Deckard (Harrison Ford), a former LAPD blade runner who has been missing for 30 years.

We still have what feels like forever to wait, since Blade Runner 2049 doesn’t open until October 10, 2017, but I already want to be the first one in line on opening day.
Posted by Brent McKnight at 8:41 AM