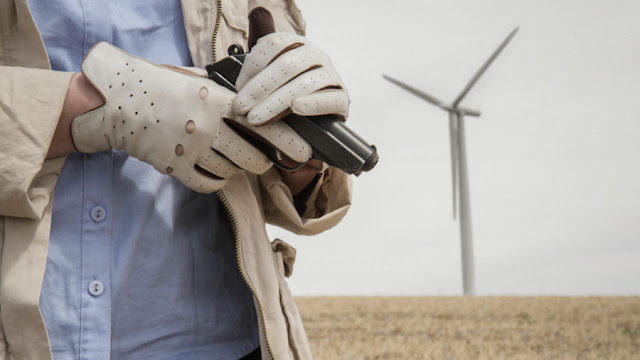 When an ambitious young journalist tracks down what he hopes will be a career-launching story, he falls into a world of high-stakes political intrigue. Such is the set up of Nathan Williams’ gorgeous, filmed-in-Washington, shot-on-a-shoestring debut feature, If There’s a Hell Below.

Caleb (Conner Marx), a freelancer for a small weekly paper in Chicago, meets his mysterious source, Debra (Carol Roscoe), in a remote, windswept spot, far from civilization, far from where anyone might be listening. Claiming to work for the government, with an earth-shattering leak to share with the world, she’s twitchy and on edge, and maybe completely full of shit. But Caleb is hungry for a his exclusive, and he’s willing to risk being fed a line or possibly learn a deep secret about…okay, all we really know is that this information may get both of them killed.

At it’s peak, If There’s a Hell Below is a taut meditation on storytelling, truth, national security, and paranoia in a post-Snowden world. Williams makes masterful use of the spare, stunning landscapes to manufacture tension—this is a place where the mere sight of another car presents a threat.

Character development, however, is wanting, the narrative swells with long-winded stories full of leaden metaphors, and a bold change of direction in the final act simply doesn’t work. Much of this might work as a short story or in a literary form, but it doesn’t play well on-screen, and If There’s a Hell Below’s desperation to be important and topical is palpable to the point where it trips up the film. It’s intriguing, and Williams shows remarkable potential, but with too many missteps, the slow-burn thriller burns too slow to thrill. [Grade: C+]
Posted by Brent McKnight at 2:16 PM