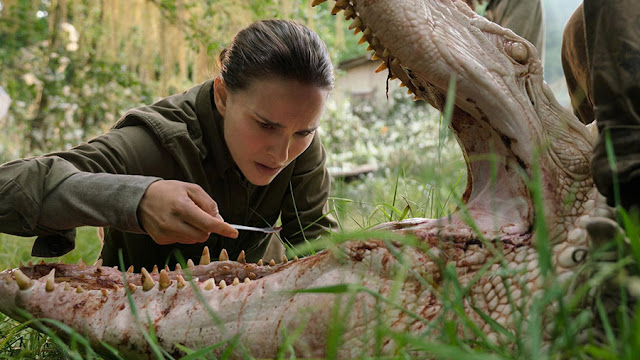 After directing Ex Machina (and writing Dredd and 28 Days Later…), I’m down to watch anything Alex Garland does. So, understandably, I’m rather jacked for his upcoming adaptation of Jeff VanderMeer’s best-selling novel, Annihilation. I haven’t read the book, but I love that Garland’s sticking around the sci-fi end of the pool, and the first teaser trailer looks very much like a movie I want to watch.

From what we see in this trailer, the easy parallel to draw for Annihilation is Denis Villeneuve’s Arrival. But while they fall into the same general category of intelligent, thoughtful science fiction dealing with an encounter with the unknown, that’s about where the similarities end to my understanding. The books have garnered comparisons to 2001 and H.P. Lovecraft, so make of that what you will.

The synopsis is simple and suitably esoteric:

A biologist's husband disappears. She puts her name forward for an expedition into an environmental disaster zone, but does not quite find what she's expecting. The expedition team is made up of the biologist, an anthropologist, a psychologist, and a surveyor.

That doesn’t say much, but it fits with the cryptic tease we get in this trailer. Just as exciting as the subject matter, Garland also assembled an incredible cast, one primarily fronted by fantastic women. Natalie Portman plays the Biologist, Jennifer Jason Leigh plays the Psychologist, Gina Rodriguez plays the Anthropologist, Tessa Thompson is the Surveyor, and Oscar Isaac shows up as the Biologist’s husband.

Garland also reteams with cinematographer Rob Hardy, who lensed Ex Machina, and that was a gorgeous movie to look at—Hardy’s also working on Mission: Impossible 6, so he’s set to have a big 2018.

Annihilation is the first of VanderMeer’s Southern Reach Trilogy, followed by Authority and Acceptance, which revolves around a secret agency of the same name. Paramount nabbed the rights to the series, so assuming the first film succeeds, we’ll likely see the next two installments on the big screen before long.