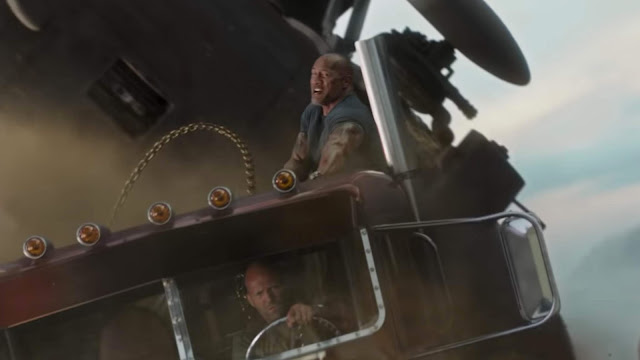 From humble beginnings as a Point Break knock off with cars instead of surfing, the Fast and Furious franchise has become the reigning, billion-dollar-earning, cineplex-packing action heavyweight on the block. Now they’re spinning off from the main saga with Fast & Furious Presents: Hobbs & Shaw, following Dwayne Johnson’s Hobbs and Jason Statham’s Shaw (#JusticeForHan). A new trailer is here and…it’s just insane.

Okay, this Hobbs & Shaw trailer starts off with crazy action, but very much in the expected Fast & Furious vein. Then it becomes what is basically a superhero/villain tale, which, let’s be honest, is where this franchise has been heading for a while. Idris Elba may well be Black Superman. (If anyone is going to be…) But then…then it morphs into what I can best describe as Samoan Mad Max. Seriously, those scenes with the truck and helicopter and battlewagons at the end are lifted straight from Fury Road.

The Rock and Statham have a great antagonistic chemistry and have for a couple movies now. I’m not sure how that will play for an entire film—though let’s be honest, I’ll watch either man do pretty much anything at this point, so it’ll probably be just dandy. But god damn, this movie looks nuts.

Do you care what the actual plot is? To be honest, the actual plot of Hobbs & Shaw appears to be Dwayne Johnson and Jason Statham globetrotting and fighting Idris Elba. I’ve watched movies for so much less. That said, here’s an actual synopsis:

Ever since hulking lawman Hobbs (Johnson), a loyal agent of America's Diplomatic Security Service, and lawless outcast Shaw (Statham), a former British military elite operative, first faced off in 2015’s Furious 7, the duo have swapped smack talk and body blows as they’ve tried to take each other down.

But when cyber-genetically enhanced anarchist Brixton (Idris Elba) gains control of an insidious bio-threat that could alter humanity forever — and bests a brilliant and fearless rogue MI6 agent (The Crown’s Vanessa Kirby), who just happens to be Shaw’s sister — these two sworn enemies will have to partner up to bring down the only guy who might be badder than themselves.