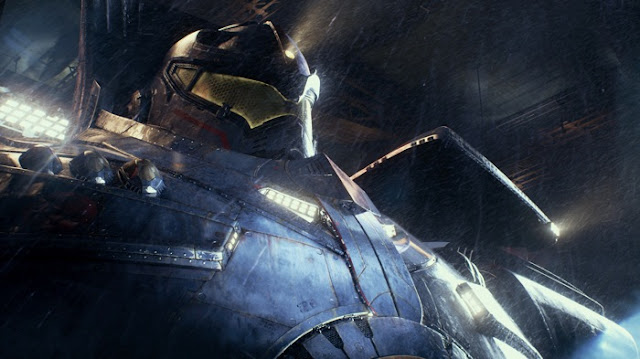 There are going to be people who absolutely hate Pacific Rim, and with good reason. Guillermo del Toro’s highly anticipated mech versus monster adventure is a big, clunky mess. The movie is 20 minutes too long, and you can pick apart just about every element. But on the other end of the spectrum, you’ll find people like me, who totally love Pacific Rim. My reaction to this movie is similar The Dark Knight Rises. All of the criticisms leveled at it are legitimate complaints, and when you break it down, there are big problems. I recognized all of this while I watched the film, but that didn’t impact my enjoyment one iota.

It’s the spectacle that truly makes Pacific Rim. Considering the usual standards by which we judge a movie, we’re talking about pretty middle of the road fare. The characters are nothing special, but you care enough about them. Nor is the story anything out of the ordinary, but it’s perfectly serviceable. All of this mundane, normal stuff, serves as a delivery mechanism to get you to the real joy of Pacific Rim, massive creatures duking it out with giant mechanical men. This movie is like the grown up version giddy young boys on a playground, smashing their toys into each other, making explodey noises with their mouths. It’s big, loud, there’s not much more to it than that, and it is exactly as much fun as it sounds.

Let’s be honest, that’s the real reason your butt is in that theater seat, you want to see big ass monsters and big ass robots (they’re not actual robots, but for ease of conversation, we’ll refer to them as such on occasion) kicking the crap out of each other. And Pacific Rim does not disappoint on that front. The first thing you see in the film is a massive beast tearing through the Golden Gate Bridge. That isn’t a bad way to start a movie, and you’re never far from a similar scene of carnage. The action is heavily stylized, but complete and visceral at the same time. If you’re like me, you may very well giggle as robots and monsters toss each other around, level buildings, and hammer each other with whatever they can get their mitts on. 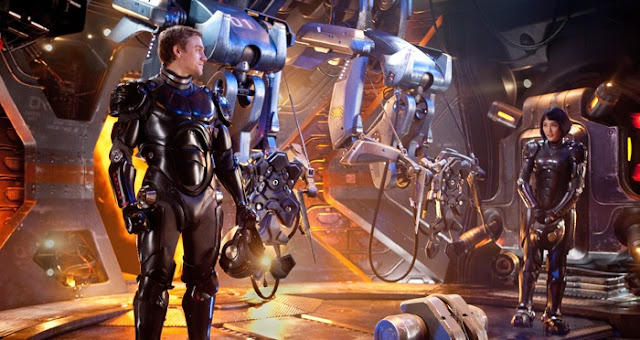 If you’ve been paying attention, you’re well aware of the story. For the uninitiated, it’s simple. Giant creatures called Kaiju emerge from an interdimensional rift on the bottom of the ocean. They wreak all sorts of havoc, stomping through cities like Godzilla on steroids, and generally cause a mess. In order to combat this new menace, humans create Jaegers, skyscraper tall, mechanized suits controlled by two pilots working with their minds synched up. This does the trick for a while, but as the Kaiju get bigger, and their attacks more frequent, the war takes a southward turn. In the end, a washed up pilot named Raleigh Becket (Charlie Hunnam), and an untested rookie, Mako Mori (Rinko Kikuchi), must ride a outdated Jaeger for one last desperate attempt to defeat the monsters at our gates, and save the human race.

There is, of course, more going on, but that’s the bare bones. Raleigh went into a self-imposed exile after his brother, and co-pilot, was killed in action. Because they are psychically linked, he felt it all. Mako is a gifted trainee, but has no real world experience. Her unquenchable thirst for revenge causes Stacker Pentacost (Idris Elba), the big man in charge of the Jaeger Program, and also her pseudo-father figure, to keep her on the sidelines. The script from del Toro and Travis Beacham doesn’t break any new ground, but they have a lot of fun. There’s a Top Gun style rivalry between Raleigh and another pilot, and though Hunnam might as well be made out of wood, he’s a solid enough stoic hero to carry the day. The thread between Mako and Stacker is the most interesting tangent in the film. Much of it is told in oblique hints and flashes, but del Toro places you, and Raleigh, in her memory for the most harrowing, emotionally significant moment of Pacific Rim. It doesn’t hurt that Elba turns in the strongest performance in the film; you would totally follow him into battle.

Charlie Day and Burn Gorman show up as a pair of scientists, though you never for one second believe them. What they’re supposed to do is inject some comic relief into the film, and this is when Pacific Rim falters hardest. Day does the frantic shtick that people seem to like on It’s Always Sunny in Philadelphia, and that it woefully out of place here, while Gorman is his wacky mathematician sidekick. Antics ensued. Eventually Ron Perlman’s black market Kaiju parts/snake oil salesman, Hannibal Chau, arrives on the scene, clad in a red suit and gold-plated loafers. Though he provides vital world building minutiae, Perlman’s acting is as subtle as his wardrobe, and he chews on every last bit of scenery he can. You’re left wanting another monster attack just to pull you out of this awkwardness. 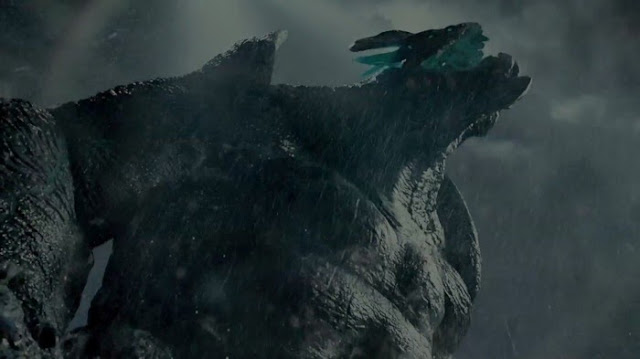 What Pacific Rim does best is the world building. While the story leaves you wanting in some areas, the aesthetic of the film is tight. The Jaegers and the Kaiju look fantastic. They’re not going for photorealism here, what  you get instead is a stylized approach that calls to mind the classic kaiju (the Japanese word for monster, and also the term coined for this particular brand of creature feature) movies. With glowing blue blood, intricately detailed scales, and bodies modeled on real life beasts, they present a sinister cartoon menace, one that plays well against the design of the Jaegers. These towering metallic suits are monsters in their own right, but their appearances call to mind classic anime like Robotech and Gundam. Pacific Rim is related to these earlier shows the same way Raiders of the Lost Ark and Star Wars are built upon old movie serials. It feels very much like watching classic Japanese cartoons I loved as a kid. Even the other Jaeger pilots—especially the Ivan Drago looking, bleach-blond Russians—feel animated.

The main urban center you experience is Hong Kong, which has taken on a high-piled, futuristic exterior. You can liken the design to Blade Runner, and you won’t be the only one to do so. Each new street is its own complete setting, and you feel immersed in the world, much like you do in Star Wars. While the overall façade is an homage to the giants that have come before it, the coolest thing Pacific Rim does is incorporate their daily reality into the landscape. By the time the action goes down, there have been numerous Kaiju attacks, and numerous defeats. These are massive, unwieldy bodies we’re talking about, not easy to move or dispose of. As a result, cities are forced to rebuild around the remains. Bare ribs figure into the skyline of the city, and a defleshed Kaiju skull has even been converted into a temple for those who attach religious significance to the great creatures.

Granted, I’ve probably been paying more attention to Pacific Rim than your average bear who catches and occasional trailer or TV spot, but the gargantuan marketing push for the movie is the one thing that negatively impacted my viewing. There has been such a glut of promotion that by the time you actually lay eyes on the movie, you can’t help but feel like you’ve already seen everything there is to see, and you’re not wrong. Warner Bros. and Legendary have unleashed a tidal wave of footage and photos, that you already know what all of the Jaegers and Kaiju look like, and you’ve already seen large pieces of most of the major action scenes. This isn’t to take anything away from seeing them on a huge screen, but you miss out on the magic of the reveal.

Pacific Rim isn’t the perfect, world changing movie I was hoping for, far from it. But that’s a lot to ask of a movie, isn’t it? The film never quite pays off in the big way that it needs to, but the rest of the film does enough to prop up the kick ass mech on monster action. I’m not sure it would hold up under multiple viewings—you’ll need more substance to pull that off—but it’s an absolute blast regardless, and a rousing success as a big, noisy summer blockbuster.

Posted by Brent McKnight at 4:34 PM

Good review Brent. I had a good time with this flick because it was as loud and stupid as I expected. However, I wish there was at least more attention paid to the characters and their development.

Just by reading your review, this sounded more like a B+ and not an A. You need to be accurate with your grades based on how you feel about a movie. Also, using cuss words in a review is not professional. Although, I do think your review for "Pacific Rim" is so interesting. But, do better next time.

If you don't like occasional swearing, sorry, you're in the wrong place. *shrug*