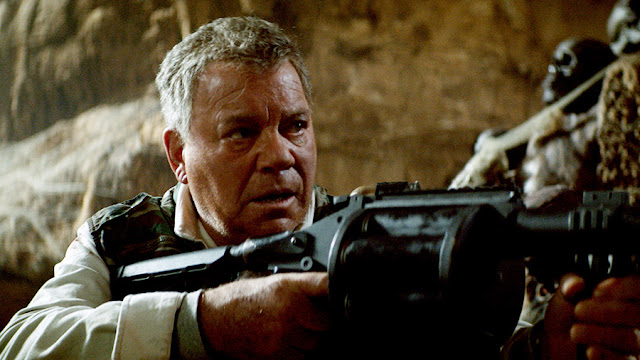 Devil’s Revenge is horror movie about “a down-on-his-luck archaeologist who returns from a cave expedition that contains a cursed relic that’s also a portal to Hell. He discovers that the only way to stop the curse on his family is to go back to the cave and destroy the relic.” It also stars Star Trek alums William Shatner and Jeri Ryan and is precisely the movie you expect from the title, description, cast, and general low-budget horror schlock. YMMV.

And when I say it “stars” William Shatner, that truly means he shows up for a handful of scenes, one early, and a few at the end. Just a heads up in case you were hoping for a showcase. Don’t worry, however, he does use a grenade launcher to fight evil demons from hell, so there’s that. Though most of his screen time he spends berating his adult son in vicious fashion. Seriously, he threatens to kill his own child multiple times. 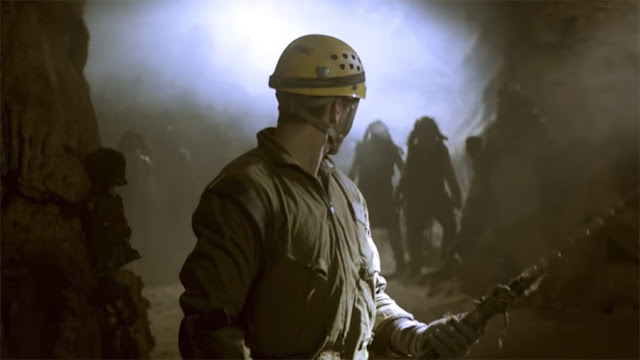 Devil’s Revenge is the kind of movie you stumble across late one weekend night on Syfy. You catch a glimpse of potential for things to go completely bug-nuts crazy, so you stick around. For the whole thing. Mostly because you’re too lazy to keep flipping channels. And by the end you ask, why did I watch that? But you did.

Former soap opera star Jason Brooks plays John Brock, the aforementioned archeologist with the cursed family. Although, the curse doesn’t seem all that disastrous. For the most part, everyone in his lineage seems pretty successful, it doesn’t appear any previous generations have died untimely deaths, they don’t spend their lives tormented or in pain, and John even has a nice wife (Ryan) who loves him and a couple of good kids. Sure, apocalyptic visions plague him and occasionally what he thinks is happening isn’t real. But that’s all his fault. Everything was fine until he went poking around in a cave and pissed off the Devil. Don’t do that. 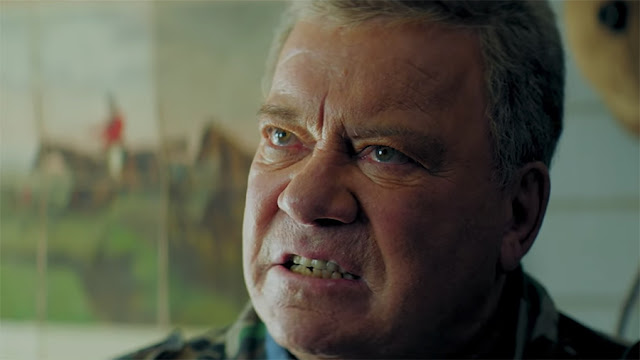 This isn’t a movie you expect to contend for Oscars and wow critics. It’s cheap and hokey and dumb. And I can handle cheap, I can handle hokey, I can even handle dumb—this is a movie that doesn’t care enough to name the ancient relic at its core, it’s just called “The Relic,” like that’s it’s actual name in history books. What I can’t handle, however, is boredom. And even with a few ridiculous flourishes, Devil’s Revenge is tedious.

In desperate need of an editor to pull it together, every scene plays out far too long and should be cut down by minutes. There’s a ten-minutes scene of driving, just driving, followed by a ten-minute scene of walking, just walking—I went back and checked the time. It mistakes slowness for tension—just because a character needs to get from one place to the next, doesn’t mean the audience needs to follow every step and that doesn’t make it interesting. Even Shatner haranguing his man-son in a barn goes on so long it loses all entertainment value. 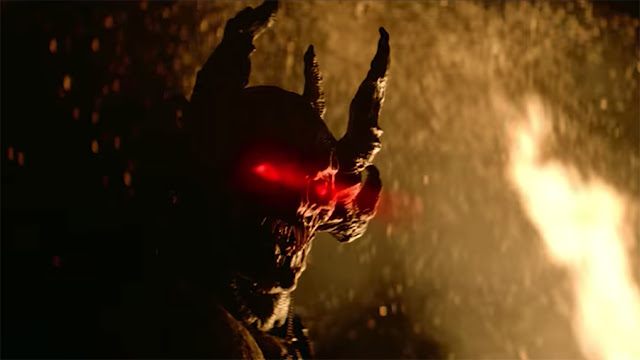 The one thing Devils Revenge has going for it is the creature design. The Devils are elaborate, intricate practical costumes that actually look pretty rad. Sometimes. The problem isn’t with the attire, it’s the way they’re filmed. Even the best effects look like what they are under bright lights, and for some unknown reason, director Jared Cohn shoots them under the brightest lights possible. Not only are the deep, dark, remote caves Brock and his entire family (they tag along for the most tenuous of reasons) spend hours exploring the most well-lit holes ever put to film, the monsters also pop up in university hallways, hospitals, and fields in the middle of the afternoon. They’re good costumes, well-designed and constructed, and look cool in the few scenes where they’re appropriately lit, but in broad daylight, they still look like the rubber suits they are. It seriously resembles a collection of secondary performers from a Gwar concert.

Other than some potentially cool monsters, there’s not much to recommend Devil’s Revenge. The concept isn’t bad—a haunted man, tormented by a family curse, who sees demons that aren’t there—but it does nothing with that. Full of continuity errors, characters making illogical choices (even by schlocky horror movie standards), and brutally drawn out, it’s not worth the time.

Posted by Brent McKnight at 9:13 AM