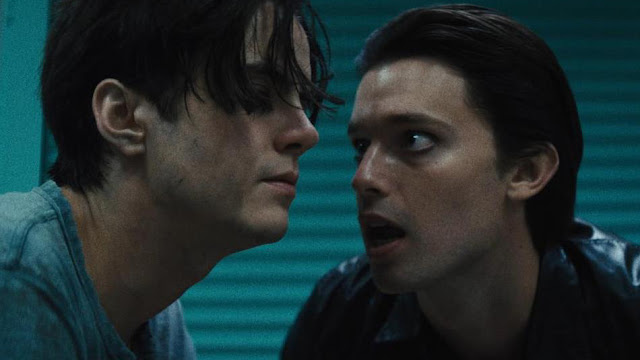 What if Drop Dead Fred but evil? That seems to be the general premise behind Adam Egypt Mortimer’s Daniel Isn’t Real. A troubled young man’s former imaginary friend returns to wreak havoc on his life, but in a much darker, more psychedelic way than in the 1991 Phoebe Cates comedy. (Though, to be fair, that movie is pretty damn weird.) Check out the latest trailer below.

While the previous Daniel Isn’t Real trailer was more about the twisted tone and ambiance, this one delves much deeper into the plot and characters. Though don’t worry, there’s still a lot of flashy lights, dimly lit holes in the wall, and neon color schemes that really drive home the fact that this comes from the same people who produced Mandy.

Troubled college freshman Luke (Miles Robbins) suffers a violent family trauma and resurrects his childhood imaginary friend Daniel (Patrick Schwarzenegger) to help him cope. Charismatic and full of manic energy, Daniel helps Luke to achieve his dreams, before pushing him to the very edge of sanity and into a desperate struggle for control of his mind—and his soul.

This trailer also drops a number of pull quotes from various reviewers who caught the movie on the festival circuit. Make of those what you will, but from people I know who have seen it, and who I trust in these matters, this sounds 100% like my jam. Weird, dark, hallucinatory, bloody, all the best things.

It feels like Daniel Isn’t Real has been on the way forever, even though it’s only been a few months—it premiered at SXSW in March. But it’ll be here in a short bit, hitting VOD and what I’m sure will be a miniscule number of theaters on December 6. Should make a nice bit of horror counterprogramming with all the end-of-the-year awards bait and tentpole blockbusters dropping around the same time. It’s nice to have a palate cleanser on deck.
Posted by Brent McKnight at 8:54 AM