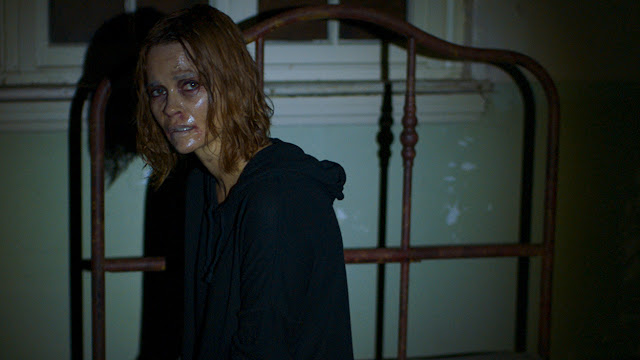 Primarily known for politically minded science fiction films like District 9 and Elysium, with his latest film, Demonic, writer/director Neill Blomkamp dives into low(ish)-budget horror. The results of this attempt to revive a career that started on a high-note and has flagged somewhat since, are mixed. It has cool ideas, even if they’re not always capitalized on, more than a couple missed opportunities, a strong visual sense, and a heavier emphasis on ominous mood and atmosphere rather than outright scares.

Carly (Carly Pope, Arrow) hasn’t spoken to her mother, Angela (Nathalie Boltt, Riverdale), since the latter went on a murderous rampage. Years later, Angela, still a prisoner, is in a coma and part of a dubious study of new technology that allows communication with unconscious people via a simulated AI world. Reluctantly, Carly goes under in an attempt to get answers about her mother, herself, and her own past, and along the way maybe unleashes a demon or two. As happens. 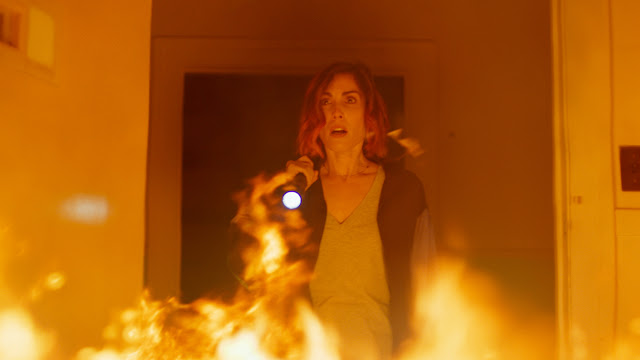 Never one to not use a shiny new technological toy, in Blomkamp’s hands, the simulation resembles a mixture of the rotoscoping of a film like Waking Life and a game of the Sims. Some people are definitely not going to be fans, but the almost-lifelike aesthetic creates a glitchy, unnerving uncanny valley effect; it looks near real but also unsettles the viewer. This is also mostly present in the first act and the usage dies off as Demonic focuses on exterior concerns. Which is for the best, as the film uses this tool for what it’s worth and moves on.

Blomkamp’s script parses out information gradually, just the bits necessary to move the plot along. Carly and Angela are estranged, Angela’s in prison, the details of Angela’s crime, Carly’s reaction, and so on, the details come out when needed. While it gets a fair chunk of exposition out of the way early on, the film takes a while to really settle into what it is, which is a possession movie with a high-tech edge. 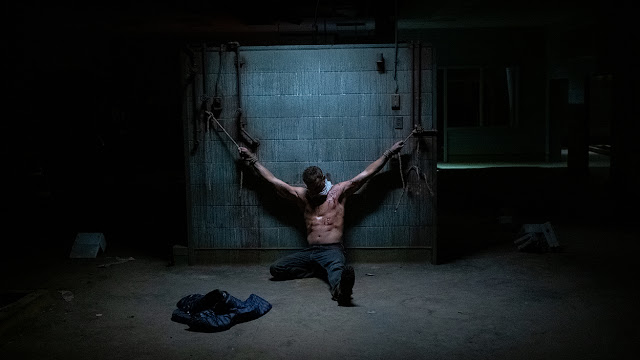 It’s here that Demonic makes its biggest miss. This may be a bit of a spoiler. (It’s built as a big a-ha moment, but doesn’t land as intended.) It turns out the sketchy men who run the study, Michael J. Rogers (Fringe) and Terry Chen (The Expanse), are part of an elite paramilitary team run by the Vatican. Using technology, they determine if reported cases of demonic possession are in fact legit, and subsequently deal with them if they are. This is a unique spin, one that makes you sit up and take notice, and would allow Blomkamp to indulge his penchant for both tech and tactics, filtered through a possession narrative filter. Only the film does nothing with them. Almost as soon as they’re introduced, they’re ignored and pushed aside to tell another rote, saving-a-loved-one-from-possession yarn. You keep waiting for them to come back and make an impact, only they never do. Outside of one overly convenient plot point, they’re barely even a red herring.

Though it hits all the tricks and tropes, Demonic never lives up to its potential. Pope does an admirable job as a woman looking to her past for answers, and not in a healthy way. Blomkamp knows how to assemble a nice looking movie. (Outside of the simulation, which seems to be a big no-no for many people.) But while the film has some strong startling imagery and a spooky overall mood, it feels most engaged in the technological components than with the character, story, or horror elements. Blomkamp tends to write his own features, but though he’s a gifted formalist, it’d be interesting to see him work with from someone else. [Grade: C+]