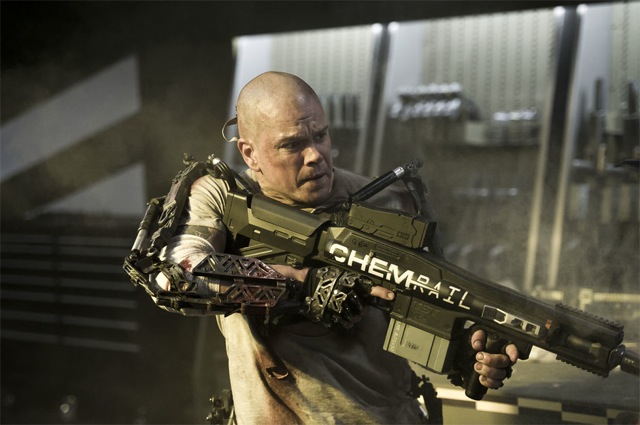 Neill Blomkamp’s Elysium isn’t going to sneak up on anyone like his last film, District 9. That film, his feature length directorial debut, put him squarely on the map, and marked any future endeavors as movies to keep an eye on, especially for sci-fi fans. Neither is Elysium going to surprise anyone. If you’ve seen District 9, have a sense for the politically dense stories Blomkamp favors, and have paid any attention to the promotional buildup towards the film, you know precisely what you’re in for. This time around, Blomkamp has a budget, some major celebrities on his side, and, unfortunately, a script that lacks anything that resembles subtlety.

This isn’t to sat that Elysium is bad, or that you shouldn’t watch it, but know going in that the political themes that were front and center in District 9, are pounded like a bass drum, over and over again. When it hits its stride, the movie is fantastic, but the message is heavy-handed, and gets seriously repetitive. You even get to a point where you’re in the main narrative thrust of the story, and you pause for a moment and think, okay, the set up was a little rocky, but now things are going along just fine. Then the overbearing political angle comes roaring back. In this case, a little more showing, and a little less telling would have worked wonders.

The world of Elysium is rendered in intricate, painstaking detail, and this is where Blomkamp and the film are most successful. You’re placed in a setting and situation where it’s perfectly normal to see a police droid roaming the filth-covered streets, harassing pedestrians in a strikingly similar fashion to their human predecessors. Everybody has dirt smudged on their faces, there are tons of homemade-looking tattoos, and feral children roam the streets in packs. The visuals are near perfect, with all sides stitched together without a seam, that the mesmerizing spectacle of the thing feels entirely natural. 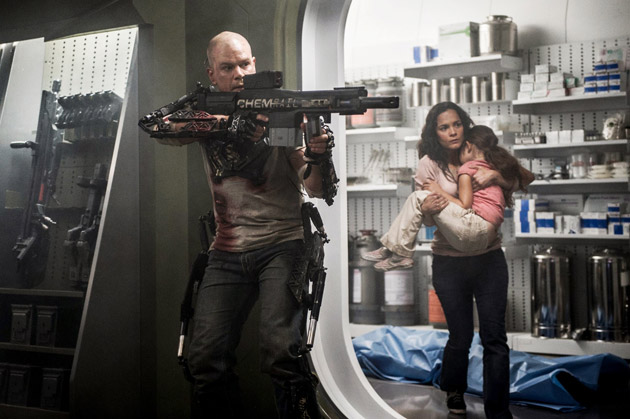 In the year 2154, the world has devolved into one, planet wide, ghetto. Those who can afford it, flee, leaving the confines of Earth for a sterile, crime free space station called Elysium. It is to Earth what the suburbs were to the inner city in the 70s and 80s. While the rich live in luxury, people like Max De Costa (Matt Damon), an ex-con orphan trying to go straight, wallow in endless despair. When an on-the-job accident exposes Max to a lethal dose of radiation, he’ll die in five days. There is one out, however. On Elysium every house is equipped with a magic medical pod that, in a matter of minutes, can cure all of your ailments.

This is where the thin veil of allegory—and I mean thin—slips off. On Elysium, Secretary Delacourt (Jodie Foster) keeps up their strict immigration policies. For Pete’s sake, they refer to any unauthorized craft as “undocumented,” so you know exactly what point they’re trying to make. Their technology would do a lot of people a lot of good, but only the most affluent need apply. There are some b-stories, with Delacourt attempting to stage a coup, and a romantic angle between Max and childhood sweetheart Frey (Alice Braga). All of this, however, is just a delivery system get Max to Elysium, and put him in conflict with Kruger (Sharlto Copley), a deranged, psychotic sleeper agent on Earth. Kruger would fit right in with the Lord Humongous and his gang of post-apocalyptic madman in Road Warrior. Copley does crazy well. Along the way, Max also gets a badass metal exoskeleton bolted into his bones, which increases his ability to kick ass, and ups the ante in the numerous fight scenes.

Elysium finds a groove and peaks as Max attempts to find his way off world. In a move that calls to mind Johnny Mnemonic, he attempts to brain-jack a shady corporate exec to trade the information to a coyote for a one-way ticket. This information could open the doors of Elysium to everyone, or keep them out for good. There are videogame inspired shootouts and chases as he evades Kruger and his cronies. All the while Max is trying to be a good guy, that sweet, earnest child Frey knew back at the orphanage, but it’s hard not to fall into self interest and desperation when your clock is tick, tick, ticking down.

As much as many of the most powerful works of science fiction serve as allegory, in the case of Elysium, the message is so blunt, so domineering, that it not only distracts from the story and characters, it actively hinders them. If Blomkamp had simply told the same story, with the same characters, but reigned in the overt sermonizing, he could have made the same points. Simply the juxtaposition of stark images of disparity, and Damon’s performance, would have done the trick, and made the point clear without being . We could be talking about one of the best movies of the year instead of a movie that is hampered by its message. Elysium is close, so close, to greatness, that it is a shame to see it weighed down as it is.

Posted by Brent McKnight at 7:37 PM