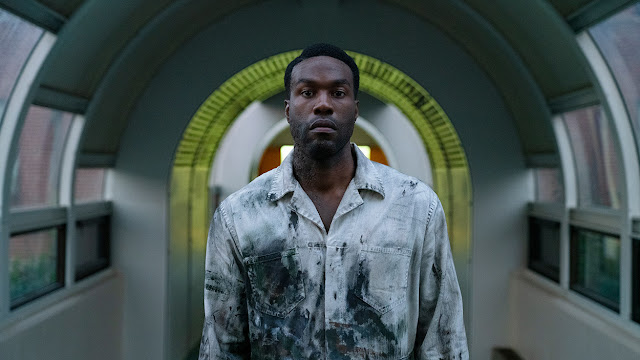 Anthony McCoy (Yahya Abdul-Mateen II) is a promising if artistically blocked up-and-coming painter repped by his gallery-running partner Brianna (Teyonah Parris). Under pressure to create, he stumbles across the story of Candyman, a hook-handed urban legend who has haunted Chicago Cabrini Green neighborhood for generations. What he finds is that the myth holds more truth than he thinks and kicks off a new wave of horrific splatter-heavy violence.

[Related Reading: 'Candyman' Trailer: Say His Name, Be His Victim] 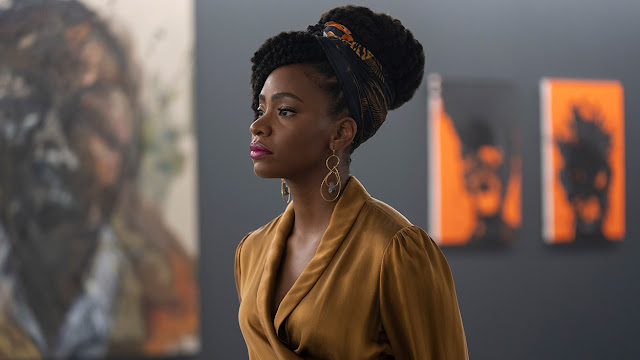 So many of these long-after-the-fact sequels aim to serve as de facto reboots or reinventions, circumventing the dreaded “remake” tag. DaCosta’s Candyman certainly falls into this category, but, along with fellow writers Jordan Peele and Win Rosenfeld, she crafts a film inexorably tied to what came before in clever, satisfying ways that also stands on its own. In fact, these links to the past serves as a key thematic through line for the film, which is, at least in part, about history and the past and how what came before impacts the present.

Also at the center of the story is black trauma, gentrification, and cycles of violence and prejudice both personal and generational, and the use of urban legends as a coping mechanism or way to make sense of collective anguish. This is where Candyman derives most of its resonance, but also where it runs into problems. 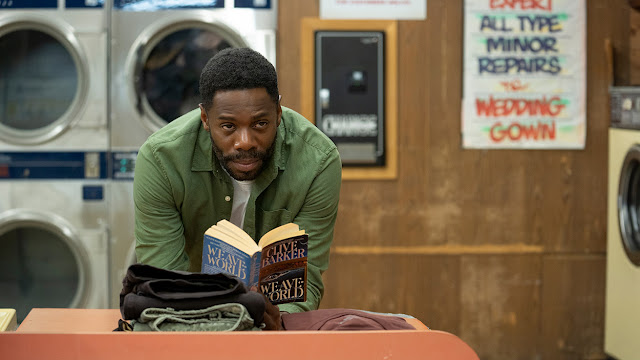 The film works best when it dramatizes these concerns, which it does and does well. At times, however, it almost steps away from the main narrative to explicitly state points in ways that not only affect the pace and momentum, but that come across as didactic and overly blunt. There’s obviously a whole conversation to be had about marginalized communities needing to do this, needing to scream at the top of their lungs to even be heard at all, and still be largely ignored. But simply from a mechanical perspective in Candyman, it impacts the flow and structure.

The fact that the movie loses focus further exacerbates this issue. It tries to do too much; it tries to do everything and tell everyone’s story, and winds up scattered. A few times it flashes back to Brianna’s past, to scars from her early life. These glimpses offer a bit of insight into her career and what drew her to Anthony, but are left undeveloped and unresolved beyond that. It frequently dips back to William (Colman Domingo), a long-time Cabrini resident and exposition source, whose third-act turn doesn’t quite land. Among other unfocused asides, including but not limited to the intricate political workings of the art world and pretentious critics. 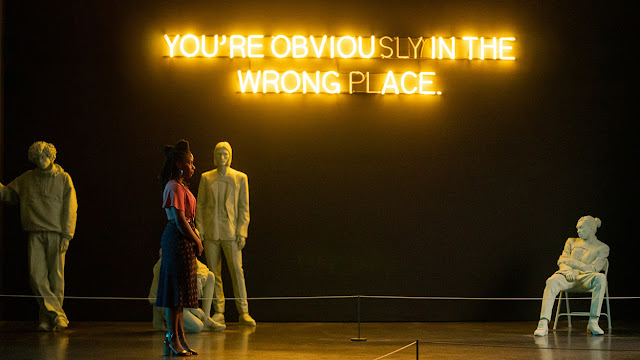 These are structure and script problems, though, not anything to do with the actors, who are across the board great. Especially Abdul-Mateen and Parris. The duo has all of the chemistry and are an incredibly compelling on-screen couple—please let them co-star in more movies. Anthony is layered and nuanced, charming and confident on the surface, but insecure, pressured, and discouraged below. His path further and further into obsession begins here and the foundation is laid early.

Though Candyman leaves her history somewhat flapping in the wind, Brianna herself is a strong character. As best she can she attempts to navigate intricate business machinations, reconciling the role both she and the art world play in gentrification of their neighborhood, and much more. Again, it’s a lot. For all his layers, Anthony has a straightforward course, but Brianna bears the weight of the script’s issues. It’s a testament to Parris and her performance that, despite all the scattered threads, it’s never as messy as it could have been. She’s compelling and defiant and smart in ways horror movie heroines often aren’t allowed to be. When Anthony takes a violent turn, she’s immediately out—she doesn’t try stay and fix him. Realizing this is a dangerous situation and she makes the right call to remove herself. Or opening the door to a dark, mysterious basement and shaking her head. It’s a big old nope. 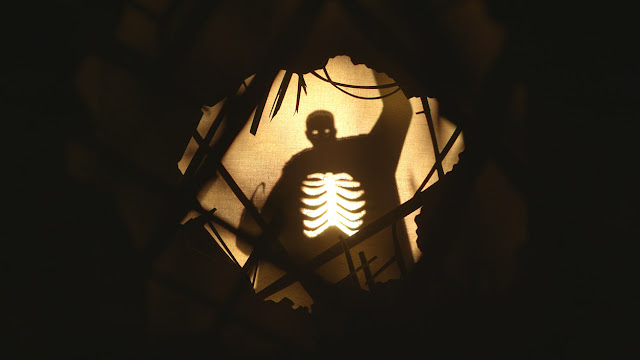 Working with cinematographer John Gulesarian (ZMD: Zombies of Mass Destruction), DaCosta made a gorgeous film. From the opening studio logos, which are backward, she uses mirrors and inverted images to fashion an unsettling sense that nothing is as it appears and subvert visual expectations. Severe camera angles moving unusual directions and shots of skyscrapers disappearing into fog create a sensation of floating, of being unstuck in time, much like the story. Each frame is inventive and deliberate, down to the juxtaposition of the Chicago skyline, growing more and more modern in the background as the film progresses, against the housing projects in the foreground, which practically crumble before your eyes, almost reclaimed by nature in places. And the use of shadow puppet interludes is nothing short of breathtaking, as well as terrifying. (If only they’d been a surprise and not spoiled in every trailer.)

There’s plenty of blood and violence to satiate all but the most hardened gore heads. It’s graphic and splattery, and frequent. As Anthony delves deeper and deeper into the realm of Candyman, he begins to lose himself, to decay and change in gnarly, stomach-churning body horror ways that would make David Cronenberg proud. 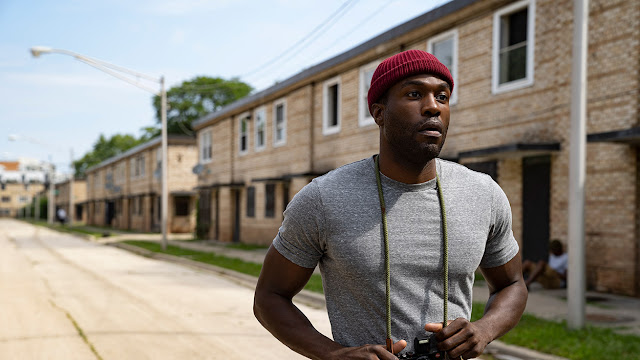 Though uneven and over-full, Nia DaCosta’s Candyman is a hell of a movie. (For any flaws, I watched through the credits then immediately hit replay on the screener.) Chilling and ominous, it’s never dull or uninteresting. With a timely critique of social power structures and repeated, evolving forms of oppression, it’s beautiful, strange, horrifying, and masterfully crafted. [Grade: B]