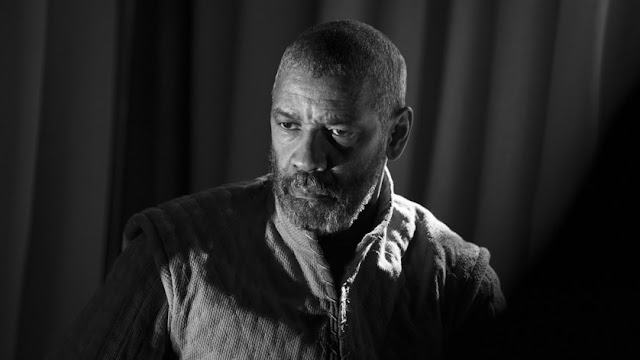 Filmed by frequent collaborator Bruno Delbonnel (Inside Llewyn Davis, The Ballad of Buster Scruggs) in a 4:3 Academy aspect ratio and black and white, The Tragedy of Macbeth sees Coen working in full German Expressionist mode. It looks like an artifact from another era, from the early days of cinema, attempting in many ways to emulate a theatrical presentation, from the sets to the stagey oration and big performances.

Denzel Washington plays the Scottish lord, told by a trio of which sisters, played here by a single actress, Kathryn Hunter, that he is destined to become king. Fueled in part by his ambitious wife, Lady Macbeth (Frances McDormand in a role she’s reportedly longed to play for years), seizes the throne and subsequently descends into madness as a result.

[Related Reading: 'Much Ado About Nothing' Review] 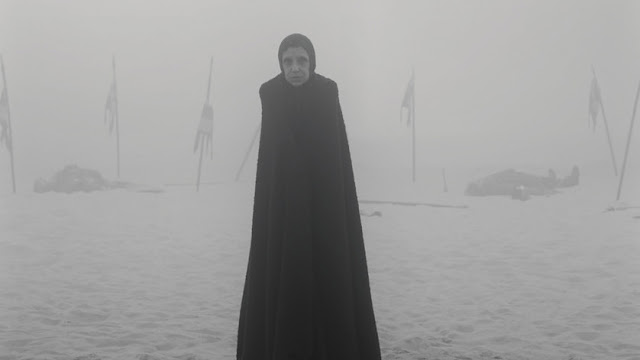 Coen adapted the play for the screen, altering significant portions, streamlining sections here and there, to mixed effect. At 105 minutes, the film passes quickly, too quickly at times, as it races past certain details and leaves threads underdeveloped.

The Tragedy of Macbeth has two key things going for it: the look and the actors. This is a truly gorgeous movie to behold. While it echoes stage productions, it’s initially clean, simple appearances is anything but. The film constructed elaborate sets in which the director choreographs his tragedy. Stark and sharp, Coen crafts a maudlin aesthetic that echoes Murnau and Lang, employing shadow and light and contrast to add thematic layers and nuance to the surroundings.

This also gives Washington the chance to go loud and bold, to play to the back seats, and he clearly relishes the opportunity. As does McDormand, who gleefully digs into the ruthless striver, though her role plays truncated and trimmed compared to other iterations. The real standouts, however are Hunter and Corey Hawkins, who takes the role of Macduff. Hunter plays all three Weird Sisters, often as a single entity. It’s an intriguing take on the parts, guiding Macbeth to his ultimate destruction with a fractured personality. Hawkins, however, is the MVP. He not only serves as foil to the King, but also as the emotional core, connecting with the audience in ways no one else in the film is able to accomplish, quietly devastating while remaining stoic and true to character.

[Related Reading: This 'Macbeth' Trailer is Violent, Dreamy, and Gorgeous] 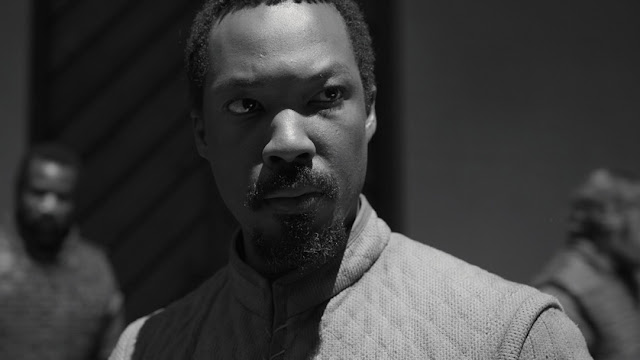 Overall, The Tragedy of Macbeth is a solid if not necessarily spectacular take on the play. (For that see Justin Kurzel's 2015 adaptation.) Though beautiful to gawk at and full of strong, intriguing performances, it never quite transcends it’s confines. A few tweaks and alterations aside, this is a fairly straightforward retelling of Macbeth. How you feel about that will go a long way to determining how you feel about this movie. [Grade: B-]