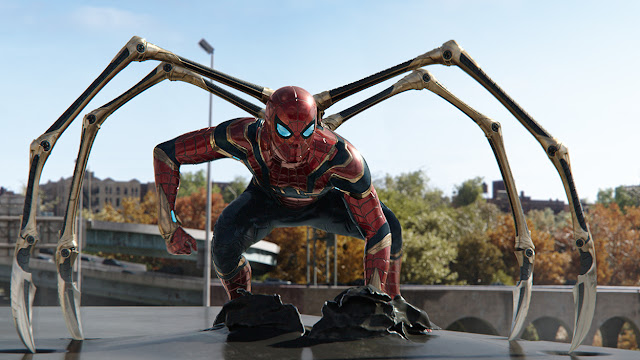 Let’s be honest, no one gives a damn what I think about Spider-Man: No Way Home, the latest in the complicated Marvel/Sony/etc. wall-crawler relationship. So, here’s the short version: it’s fine, 100% fine. It will honestly probably sound like I hated it, but I didn’t, it’s enjoyable enough, though entirely toothless, even by Marvel standards.

Marvel stans will adore this and I already know the moments that will be cited as to why this is great cinema and Martin Scorsese can suck a dick, or whatever. (My problem with most of these moments, and my biggest issue with the film overall TBH, is that most of them are incredibly contrived, to the point where they ring inauthentic and hollow.) No Way Home is like two-thirds blatant fan service, but the people it aims to serve will eat it up.

On the other hand, those who hold up Marvel as everything wrong with movies will also find their usual gripes well represented. It’s convoluted, way too long, often relies entirely on what’s come before instead of doing the work itself, skews far too safe, and never taking any sort of risks at all.

And neither side is wrong. It can be and is both things.

[Related Reading: This 'Spider-Man: No Way Home' Trailer Has a Few Surprises] 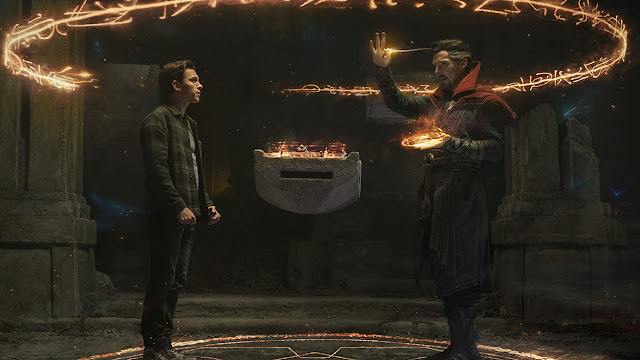 One note: I’m going to do my level best not to spoil anything as we go. That said, if it’s in the trailers, I consider it fair game. And there are a bunch of big reveals in the trailers. So, if you’re trailer-averse, there will be substantial surprises beyond this point. Then again, if you care that much, you probably aren’t reading this until you’ve seen the movie. Either way, you’ve been warned.

No Way Home picks up almost immediately in the wake of Spider-Man: Far From Home. Peter Parker (Tom Holland) has been outed as the web-slinger and let’s just say it has an impact. And not a positive one. However, he’s not the only one dealing with this fallout. His SO MJ (Zendaya) and BFF Ned (Jacob Batalon) also bear the brunt. To the point where none of them get into MIT due to the publicity shit storm. At his wit’s end, Peter goes to Doctor Strange (Benedict Cumberbatch) for help. The Sorcerer Supreme casts a spell to make people forget PP is SM, but it goes wrong. Instead, it messes with the very fabric of reality and draws people from alternate universes into this one. It’s a bit of an oopsie moment.

As a chapter in an ongoing, ever-expanding superhero narrative, No Way Home works well enough; on its own, it’s a bit shaggy. Clocking in at two-and-a-half hours, the early going can be a slog; all the college application stuff is a tedious boner-killer, and the fact that they make J. Jonah Jameson (J.K. Simmons) and The Daily Bugle a stand-in for Infowars or similar nonsense is obnoxious from the first beat. 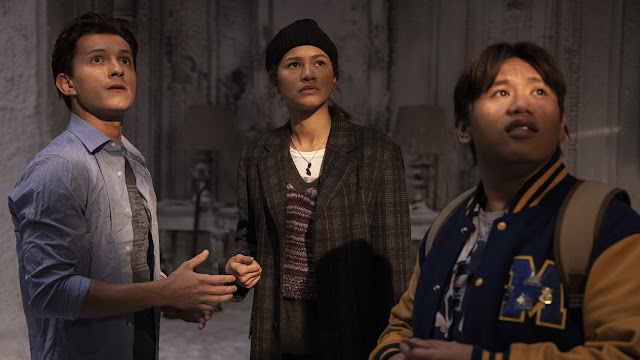 The visitors from other realities, which in this case means they pulled characters from previous cinematic incarnations of Spider-Man, is a mixed bag. We’re talking a real hit-and-miss proposition. The scenes with Alfred Molina reprising his Doc Ock from the Sam Raimi Spider-Man movies is the highlight as far as this is concerned. (Not a spoiler, he’s prominently featured in the marketing.) The rest, however, work less well. A couple are because the characters, as rendered on screen, were never effective to begin with. In other instances, this movie doesn’t know what to do with them beyond a shocking introduction. Overall, it’s all very shoehorned-in and ham-fisted.

In addition to being obvious, and blunt, fan-service, the first half of the movie plays primarily as table-setting for Doctor Strange and the Multiverse of Madness next year. It’s a trap the MCU often falls into, they kill momentum and take focus away from the characters in order to set up what’s next instead of dealing with what’s now.

Roughly the final third is where No Way Home hits its stride. It’s where director Jon Watts and the power brokers at the studio let it be a Spider-Man movie instead of a Marvel movie. And here it does what this iteration of the wall-crawler does best. Holland, Zendaya, and Batalon showcase their easy, earnest chemistry. They’re quippy and sharp and full of sarcastic banter, all of which overlays their deep, heartfelt connection. Here the movie develops the energy and momentum it lacks elsewhere. And in the end, it leaves Peter/Spidey in an intriguing place and facing promising dilemmas on a number of fronts. 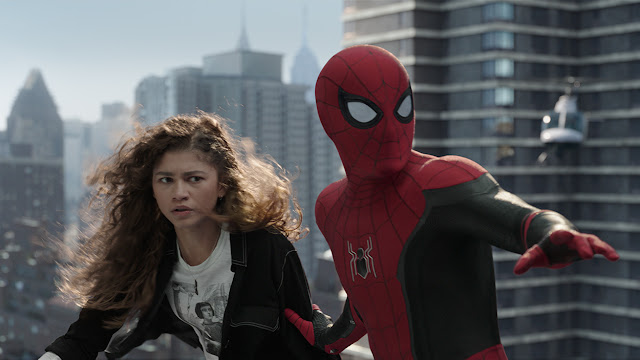 This is definitely a situation where the further I get from this movie, the more times I watch it, the more I suspect I’ll enjoy it. And that’s because of this section of the film. This is where it’s most memorable and has the most staying power. I always cling to what I like while the rest of it fades away, but right now, the noise is still too close and drowns out the good.

I’m excited for people to see No Way Home, because the one thing I’m most interested in talking about, what I think it does best and where it most achieves what it aims for, is an absolute bomb of a spoiler. We can discuss that at a future date, but in my opinion, it not only pulls off a tricky balancing act, it rectifies a grievous past wrong perpetrated by previous Spider-Man movies.

Spider-Man: No Way Home is destined to be the biggest movie since the pandemic shuttered theaters. I can’t think of anything that has had anything even close to the box office this is going to generate. What I think about it is entirely irrelevant. It stumbles out of the gate and continues to clumsily bumble around for a while. The fan pandering gets old fast, and there’s a been-there-done-that cloud over most of the first half. This works best when it’s allowed to be a Spider-Man movie, to center those character and to indulge that personality, rather than when it focuses on being Marvel Product Number Whatever we’re on now.