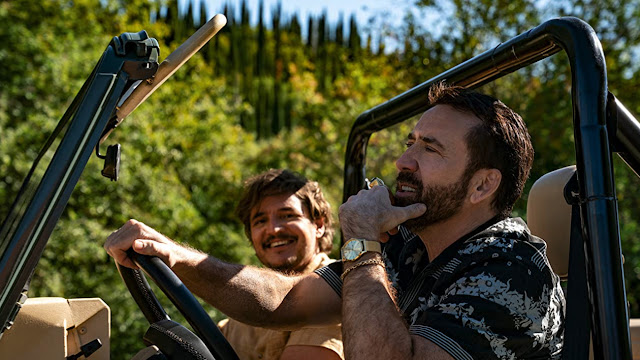 You may have heard of this as the movie where Nicolas Cage plays a version of Nicolas Cage who, at the behest of the CIA, accepts a paid appearance at the birthday party of a superfan (Pedro Pascal). A superfan who also happens to be a billionaire drug kingpin.

Yes, The Unbearable Weight of Massive Talent sounds wild, this trailer looks wild, and given the ample opportunities to get weird, one has to assume that Cage is going to get very, very weird indeed.

If you’re worried that this meta turn is a cry for help from Cage, don’t. He told Entertainment Weekly:

"['Nick Cage'] is an invented version of Nic Cage. The character is feeling unfulfilled and contending with the rejection that can happen so often in the small town that is Hollywood. It's not me. I'm feeling pretty good about things."

Surrounding Cage and Pascal, director Tom Gormican (the sadly short-lived series Ghosted), who also co-wrote the script with Kevin Etten (Kevin Can Fu**k Himself), has assembled a cast that includes Tiffany Haddish, Neil Patrick Harris, and Ike Barinholtz, among others.

Honestly, this may be the greatest film ever or be completely insufferable, but either way, sign me the hell up. However it plays out, The Unbearable Weight of Massive Talent releases in April 2022.