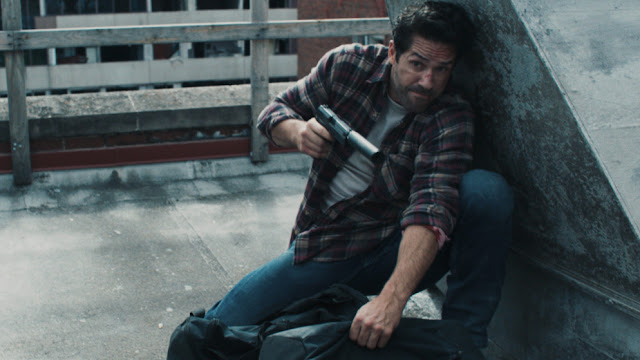 A low-budget, Dolph Lundgren-directed, Scott Adkins-starring DTV action film. If those words mean anything to you, and if they do and they pique your interest in a positive way, Castle Falls has something for you.

In reality, this isn’t top-level Adkins; he’s as compelling to watch as ever, but as a whole Castle Falls is mid-tier at best. It’s better than some—as much as I adore the man, Max Cloud is not good. But while it’s solid and sturdy and largely accomplishes what it sets out to do, it never hit’s the highs of films like Ninja 2, Avengement, or One Shot, among others, which rank with the best modern action movies.

Like many works of this ilk, this belongs to a very specific stripe of action film. One that was so predominant in earlier eras but doesn’t get made much anymore, but that has found a niche on the straight-to-streaming market. It fits well with Adkins’ canon and should satisfy extant fans.

However, how much enjoyment you find here definitely depends on your particular proclivities and your feelings on that type of movie. Thus, the appeal is limited to die hard action stans. But let’s be honest here, those are the people who see a Scott Adkins/Dolph Lundgren movie and immediately add it to their watchlist. 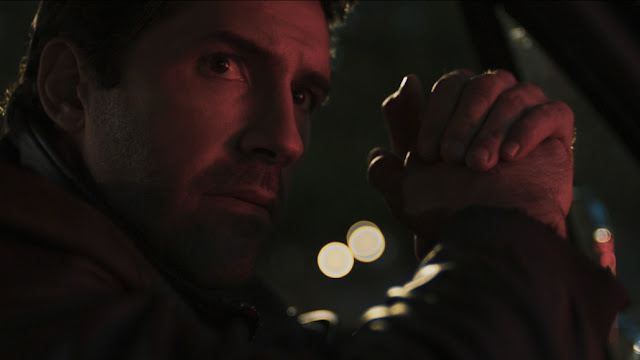 The plot puts three parties at odds as they attempt to snatch three million dollars stashed in an abandoned hospital slated for imminent demolition. First there’s Mike (Adkins), a down-on-his-luck MMA fighter aging out of a young man’s game. Then we have Ericson (Lundgren), a prison guard with a daughter who will die without an organ transplant he can’t afford. Finally, there’s a paramilitary group, a phrase used very lightly because most of them are quite inept in any tactical way, led by Deacon Glass (veteran stunt performer Scott Hunter) and Kat (Kim DeLonghi, The Last Son), from whom the money was stolen in the first place.

A simple enough premise, the script by Andrew Knauer (The Last Stand) makes things incredibly convoluted. There are rival prison gangs, we see Mike’s life unravel until he moves to a new town, in addition to his daughter’s illness, Ericson gets dead-wife story that’s both ill-defined and painfully generic. And until they’re described as a paramilitary group fairly late in the game, Kat and Deacon’s crew seems like run-of-the-mill drug dealers. There’s no real reason for them to be more than that, they function exactly the same either way, though it’s easy to imagine a version of this screenplay where they’re some kind of extremist militia, but that got trimmed for time.

Castle Falls is, unsurprisingly, best when it sticks with Mike. His story is bland and familiar, but at least the film spends time with him, and Adkins imbues the character with every-man pathos and a warm heart that keeps him engaging and compelling enough. Make no mistake, it’s a thin role, but Adkins does what he can with it. And, of course, when he’s involved is also where the action peaks. 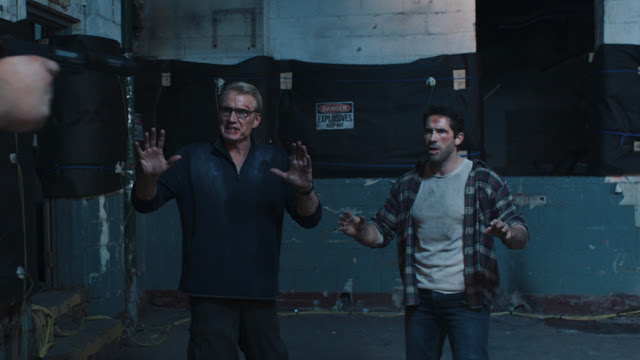 Not only is Ericson’s family melodrama so, so, so paint-by-numbers as to be completely devoid of any emotion or engagement, the film glosses over it so quickly it’s almost an afterthought. And Lundgren, love the dude, doesn’t do much to sell the fatherly devastation acting wise. (At one point, I said out loud to myself, “Is he supposed to be crying?”) Somewhere there’s probably supposed to be an indictment of the American healthcare system, it’s total lack of compassion, and profits-over-everything mentality. Or at least there could be, but as with most other elements, it never develops. Similarly, with the gang, aside from Kat and Deacon always about to rip each other’s clothes off, they have little personality or texture.

Castle Falls does a great deal of shifting and shimmying in setting up the pieces when a more direct approach would have been vastly superior. Instead of getting down to business, we see scenes of Mike bonding with his hard-luck coworker at their hardscrabble construction job. Or we watch one of Deacon’s men follow Ericson around, hoping he leads them to the missing money. There’s simply nothing unique enough here to interest the audience, and by the time the film gets to the point—where the three strands come together in the hospital, clash and come to blows over the money, and have a ticking clock to get out before the building implodes—it’s 50  plus minutes in.

When the action finally kicks in, as with the rest of the movie, it’s best when it features Adkins. Obviously he’s one of the best movie martial artists currently working, which is on full display. Let’s be real, this is the primary reason to watch Castle Falls and its chief source of appeal. Lundgren populates his movie with a strong squad of stunt performers and knows enough sit back and let them go to work. When the Swedish star gets in on the fisticuffs himself, he also comports himself well enough, though any time he has to run or move quickly from one place to another, it’s a bit rough. I’ve said it before, but Lundgren moves like a 64-year-old who has put his body through the ringer making decades of action movies. I feel it in my knees when he tries to sprint. 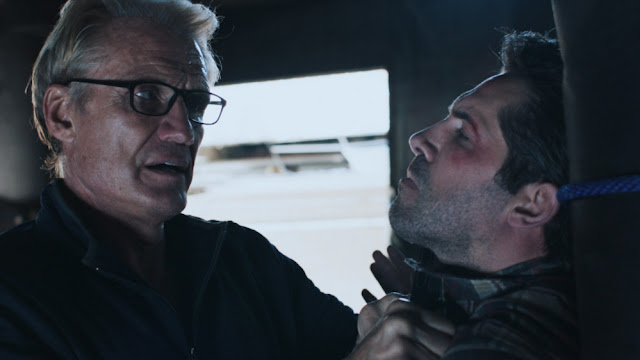 As a director, Lundgren’s style is best described as unfussy. This is straight-forward, unobtrusive filmmaking. The only times there’s anything out of the ordinary to notice visually are two or three instances where he employs a split screen device. It sticks out as entirely at odds with the rest of film. There are also a few ill-advised, wholly unnecessary titles over establishing shots—we get that it’s a prison, the visuals do that work, there’s no need to print it on the screen. Beyond that, there’s not much in the way of affectation.

To say “it is what it is,” is a cheap, lazy way to describe a movie, but Castle Falls is exactly what it looks like it’s going to be. For good and for ill. This is a cheap, DTV action movie with dubious acting, pacing issues, a few logistical headscratchers, and obvious budgetary constraints, that hangs its hat on its star and the fighting chops he brings to the party. It doesn’t particularly stand out, and it’s not a movie that’ll ever be heralded as an action classic. But it does precisely the job it sets out to do, generally delivers the goods, and should more than satisfy Adkins fans and devotees of this style of action. Outside of that niche, there’s limited allure, but if you’re reading this site, and you’ve made it this far into this review, I’m willing to bet Castle Falls will appeal to you. [Grade: C+]