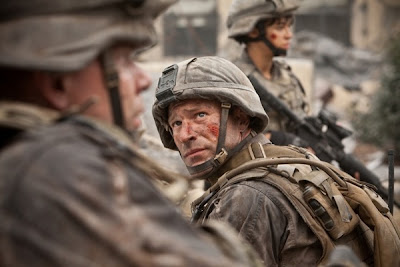 Over the years movies have taught many important lessons, chief among these are don’t retire, never retire, nothing good will come of it. Everyone knows that the moment you announce you’re about to retire is the moment when the universe starts trying to kill you with gusto. Danny Glover learned this the hard way many times over in the “Lethal Weapon” franchise. Aaron Eckhart should have learned from Danny Glover, for the Glover is wise, but alas, he did not, and when he tries to retire aliens invade the earth and wreck up the joint in the badass new sci-fi actioner “Battle: Los Angeles”. He should have known better.


Staff Sergeant Michael Nantz (Eckhart) is a Staff Sergeant in the United States Marine Corps. He’s been in the Corps for twenty years, seen all sorts of combat action, and is sick and tired of all the uppity young whipper snappers these days. There are also all sorts of rumors about how he got some of his squad killed on his last mission, which also plays into his increasing disillusionment. So he turns in his papers and is about to walk away from everything he’s ever known. Unfortunately for Nantz, and the rest of the world, a surprise meteor shower turns out to be a surprise alien attack instead. It’s a little like that scene in “Bones” when Snoop Dogg pops up behind the guy and goes “surprise” then kills him. Imagine that in extraterrestrial invasion form and you get the general idea.

“Battle: Los Angeles” is a pretty simple story, it is also a pretty standard war movie. The first few minutes are spent introducing a group of characters. Each one has a unique identifying characteristic. Nantz is the one who is about to retire and gets slightly more personality than the others, but there is also the one about to get married, the one about to have a baby, the virgin, the one with post traumatic stress disorder, and some others. They’re all typical war movie types, and as they’re introduced you can pretty much pick out which ones are doomed. They’re at least mildly interesting, enough so that there is a minor pang of sadness when they get crushed, burned, blown up, or dead in any of a variety of ways.

Fortunately for you, me, and everyone else, people are not what “Battle: Los Angeles” is all about. Story and character are secondary concerns. What “Battle: Los Angeles” is all about is shit blowing up and crazy alien killing machines. And isn’t that what you really wanted out of this movie anyway? After the initial introductions things spiral out of control quickly as the invaders blow the crap out of LA, and they don’t slow down for more than a moment. These asides are used to show the grim reality of a violent alien attack, and amplify the tension by illustrating exactly how fucked the entire world is.

“Battle: Los Angeles” belongs to the same class of movie as “Black Hawk Down” (think the illegitimate childe of “Black Hawk Down” and “District 9”). The soldiers go on a mission to rescue civilians from an area that is about to be bombed into rubble, and moments of quiet suspense serve as a contrast to sudden, disorienting explosions of violence. The look of the film is that blanched, hyper-real look usually associated with war films set in the desert. Bouncy hand held cameras follow the troops down smoke shrouded streets where gun battles and ambushes lurk around every corner. It’s that “you’re in the shit with them” style of filmmaking, and is a strategy that serves the movie well. Like the Marines, you only see vague outlines of their enemies at first, which makes them all the more sinister, and as Nantz and company learn about their opponents, so do you. When the action kicks in, fire coming from all directions, you feel their confusion, panic, and desperation. These are young men under great stress, and they are frightened.

You’re not going to be surprised by anything that happens in “Battle: Los Angeles”. Nantz is the hero. There is a noble sacrifice at the appropriate moment for a noble sacrifice. A civilian steps up and contributes just when you expect it. There is a big speech with swelling music exactly where it is supposed to go. As a story “Battle: Los Angeles” is shamelessly formulaic, but there is so much action, so many explosions coming at you from every direction, that you can forgive these shortcomings and bask in the glory of 116 minutes of frantic kick ass urban warfare set in the streets of southern California.
Posted by Brent McKnight at 10:26 AM