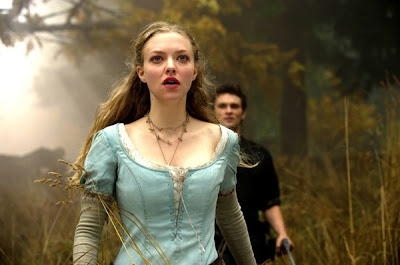 Here is all you really need to know about “Red Riding Hood”—Gary Oldman tortures a retarded boy in what is best described as a giant metal torture elephant. You may need a moment to digest this information, but rest assured, Gary Oldman does in fact torture a retarded boy in a giant metal torture elephant. Here’s how the device works. The intended torture victim, retarded or not, is locked inside a hollow metal elephant. A fire is then lit underneath to heat up the metal, and, in this case, broil the young, screaming boy inside. Perhaps this contraption has other applications, but this is the only one you see in the film.


“Red Riding Hood” is a teen melodrama that is so overly serious it borders on caricature. There are times when you’re laughing, when everyone in the theater is laughing right along with you, but then you stop and think to yourself, “oh wait, they’re not joking.” The movie is essentially a high school romance novel superimposed on a classic fairy tale. If you can accept the inherently ridiculous nature of the film, coupled with a ludicrous number of rapid zoom-into-close-up shots of trembling teenage eyes (something that comprises roughly half to two-thirds of the film), then “Red Riding Hood” is actually pretty damn funny, and if you watch it with a group of people, it is entertaining as hell. However, if you take everything at face value, “Red Riding Hood” is terrible, just awful.

It’s easy to see why Amanda Seyfried was cast in the role of Valerie, aka Red Riding Hood, her eyes are fucking enormous. No joke, her face is mostly eyeball. She lives in a small village on the edge of a dark wood, and in the opening voiceover she tells you that “the name has been forgotten by most”, but somewhere around the halfway mark people start referring to the town by name, so apparently it’s not that forgotten. Valerie is in love with Peter (Shiloh Fernandez), a pasty Robert Pattinson look-a-like with dark, brooding eyes. These two have been in love since childhood when they trapped and killed a bunny. Spilling blood together does create a hefty bond. Unfortunately for Valerie, Peter is just a woodsman, and she is betrothed, against her will, to Henry (Max Irons), a blacksmith, which must be a much more lucrative trade than woodsman, because everyone keeps talking about how rich he is. Henry is a wee bit cross-eyed and looks kind of dim, like most everyone else “Red Riding Hood”. Valerie is understandably sad about being sold off, especially to a cold fish like Henry, and she conspires to run away with Peter.

So there’s all this angst-filled drama going on, but to make matters worse, the nameless-village-that-actually-does-have-a-name has a bigger problem, one seriously badass werewolf. Every full moon the villagers sacrifice livestock to their local monster. Over time an uneasy peace has been established, and the beast hasn’t killed anyone in twenty years. Just as Valerie and Peter are about to abscond, however, it mauls Valerie’s sister to death (don’t worry, Valerie is “the pretty one”, and no one seems too broken up that the ugly sister is dead). Nasally priest Father Auguste (Lukas Haas) spazzes out, and calls in reinforcements in the form of Father Solomon (Oldman), a legendary werewolf killer, and also quite the little fascist, as illustrated by his use of the aforementioned torture elephant. Oldman is completely over the top. He keeps his two young daughters locked up, and travels around with an odd assortment of men of different ethnicities who are more or less werewolf fighting slaves.

Father Solomon’s arrival is when the shit really hits the fan, with Valerie smack in the middle. Not only is her sister dead, but her dad (Billy Burke) is an alcoholic, her mom (Virginia Madsen) admits that Valerie’s father is not her sister’s father, Valerie is torn between two sickly looking bros (this village may never have actually seen the sun) who want to do it to her, her grandmother (a dreadlocked Julie Christie) is a stoner hippie traipsing around in the woods, and on top of all of that, there’s a god-damned werewolf on the loose. Valerie is not having the best day, trapped in this world of adultery, monsters, religious zealots, and those sexy scowls that are so popular with the kids these days.

“Red Riding Hood” is all the crazy of a soap opera, skin grafted onto a horror movie, and crammed into 90 minutes. There is a disproportionate amount of time spent on long, empty stares between Valerie and Peter, Valerie and Grandmother, Valerie and Mom, Valerie and Henry, Valerie and, well, you get the picture. Paranoia sets in and she thinks everyone around her might be the werewolf, which leads to even more open-mouthed gawking. None of these long, supposedly subtext-filled looks carry any weight, they’re completely devoid of substance and meaning. Even the worst CGI werewolf you’ve ever seen gets an extreme eye close up.

There are times when “Red Riding Hood” feels like it must be a joke, like at the end director Catherine Hardwicke and writer David Johnson are going to pop out and openly mock you and tell you that the whole thing is some sort of elaborate, post-modern prank. But then you remember that Hardwicke also directed “Twilight”, and you know such sweet relief is nowhere to be found. You can’t be blamed for being at least a little bit suspicious, after all there is a primal rave in the middle of the movie that just won’t end. You think it’s over a couple of times, but then it starts right back up again. And yes, there is fire walking, don’t worry. Finally it ends with a werewolf attack, where you find out that the beast can talk to Valerie. Watching this scene you can’t help thinking, “they can’t be serious”, but rest assured, friend, they are, they are.
Posted by Brent McKnight at 10:28 AM

Best review by far "It’s easy to see why Amanda Seyfried was cast in the role of Valerie, aka Red Riding Hood, her eyes are fucking enormous. No joke, her face is mostly eyeball." Consider my time saved!

Jajajaja A great review! but you left me thinking of the name of the town, wich is...?