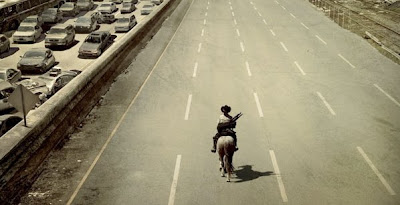 Robert Kirkman's “The Walking Dead” is one of the best monthly comics in recent memory. Though it may be about zombies on the surface, like the best of the genre, the heart of the story is the human element. Kirkman uses the plague of the undead to heighten and intensify the emotions and personalities of his characters. When faced with the destruction of everything you know, you find out who people really are, and what is really important. Frank Darabont’s adaptation of “The Walking Dead” for AMC shares this outlook, was an enormous popular and critical success, and Season One has just hit DVD/Blu-ray.


One of the cool things about the series, both the comic and the TV show, is that it takes the zombie story further than you’re used to. With an ongoing series it is possible to explore the day-to-day life and struggles of survivors. You get a wider spectrum in a season of a show than you do in a 90-minute motion picture. That’s a big reason why I’m behind the idea of turning comics into TV shows. The episodic natures of the mediums mesh well. There is more spatial freedom to tell stories that often sprawl in many directions. That's a big reason why so many comic book movies suck, there simply isn't enough room to tell the entire story, and tell it properly. And that’s exactly what “The Walking Dead” delivers.

The first thing you see in the entire series is a man dressed as a sheriff wandering through a sea of abandoned cars looking for gasoline. He spies a little girl walking away from him. When he calls out to her she turns around. Her face is a mangled, bloody mess. She snarls at him. A look of pain and heartbreak crosses his face. He shoots her in the head. This moment sets the tone for the entire series, and captures the mood and feel of the comic. This is not going to be a happy story; this isn't going to be pleasant or easy to watch.

Rick Grimes (Andrew Lincoln) is the sheriff you just met. While hunting down a car full of outlaws, he is shot and winds up in coma. In the hospital he sees bits of things, hints of what is going on around him, images of his best friend and partner, Shane (Jon Bernthal), visiting him every day, bringing him a vase full of flowers from everyone in the office. However, when Rick wakes up he turns his head only to see the flowers, now wilted and brittle. Dehydrated and disoriented, he staggers around the hospital and out into the world. Only the world isn't what it used to be.

As it turns out Rick has woken up into a real life nightmare. No one is around. Hundreds of bodies, all shot in the head, are piled outside of the hospital. A wasted, desiccated torso of a woman howls and drags itself across the lawn, entrails and spine trailing behind, somehow still alive. He does the only thing he can think of, goes home, only to find it abandoned, his wife and young son nowhere to be found. Rick heads to Atlanta, hoping against hope that his family made it to the rumored safe zone there. Atlanta is overwhelmed by the dead, but against all odds his wife Lori (Sarah Wayne Callies) and son Carl (Chandler Riggs) are alive, and have fallen in with a rag tag band of survivors, and the bulk of the season follows their attempts to carve out something that resembles a life amidst the post-apocalyptic chaos. Rick isn’t a traditional hero. Every decision he makes costs him dearly, but the group looks to him precisely because he is willing and able to make these hard choices.

The story and the characters are the strength of “The Walking Dead”, and while there is enough zombie action to satisfy, the focus is the people. How would you react to seeing the person you love most in the world turned into a monster, trying to kill you? “The Walking Dead” is grim, the kind of grim where people often say things like, “The only reason I got away is because the dead were too busy eating my family,” and where a character is forced to shoot a family member in the head on her birthday. Who is right and who is wrong in a situation that no one can comprehend? What are the rules when there are none?

Don't go in to “The Walking Dead” expecting an action movie. If you do you'll be sorely disappointed. I like movies like the “Dawn of the Dead” remake, and “28 Days Later”, but I don't consider them zombie movies in the traditional sense (okay, here is where my zombie/horror purist streak comes out). Traditional zombie films are suspense based, having more in common with Hitchcock than Michael Bay. Sure, a fast zombie may lead to a good chase scene, or jump out of a doorway and provide a quick fright, but I prefer slow zombies. Slow zombies are frightening despite being slow. As Morgan (Lennie James) says to Rick, one at a time they aren't much, but together, watch out. They are inevitable, glacial. You can shoot one in the head, or two, or three, but ten? Twenty? Thirty? You'll run out of bullets, they'll keep coming, and as episode 2 shows, the doors won't hold forever. Watching them is like watching the timer on a bomb tick down. That's my rant for today.

I’ve encountered a ton of people who absolutely despise “The Walking Dead”. Like no other show it polarizes horror fans. It seems like a love it or hate it proposition. I’m not a huge fan of the last episode, there’s too much blatant explanation, and would have liked to see more elements from the comic in the show (they have a perfectly serviceable set of characters and story lines, so I didn’t see any need to introduce new ones and abandon the ones fans already love, but hey, no one asked me), but for me, the biggest problem with Season One is that there are only six episodes. It’s kind of a tease, but at least that means there isn’t much of a time investment if you get three episodes deep and abandon ship. What you can expect from “The Walking Dead” is a boatload of tension, a bleak outlook, tough decisions, and humanity after all of the niceties and superfluous noise have been stripped away.

If the show alone isn’t enough, the DVD/Blu-ray release of “The Walking Dead” comes with a crap ton of bonus material to sweeten the pot. In the “Featurette” section of the special features you will find a 30 minute behind-the-scenes documentary, and all six episodes are given their own five minute piece where the cast and crew discuss the themes, issues, and challenges presented by that specific installment.

On the “Extra Footage” side of things are six additional short features that each explore a different aspect of the series.

“Zombie School”: In a show as zombie heavy as “The Walking Dead” you’re going to need a surplus of undead extras, so the producers had a “zombie camp” to train them in the proper way to act and move like a reanimated corpse.

“Bicycle Girl”: One of the most iconic images in the early issues of the comic is the zombie that became known as “Bicycle Girl”, the torso of a woman, left legless and crawling along the ground. This explores the process of creating that figure, which took a mix of practical and digital effects work.

“On Set With Robert Kirkman”: Kirkman takes you on a tour of the set of the first episode. Since, as he points out, comics are generally written by one person, alone in a room, the set of a major is production is a bit of a culture shock. His humor and perspective makes this the most entertaining of the bonus features.

“Hanging With Steven Yuen”: The guy who plays Glen gives you a tour of a set. Highlights include the improvised shower in the survivor’s camp.

“Inside Dale’s RV”: Dale’s (Jeffrey DeMunn) RV is a constant presence in both the show and the comic, and DeMunn gives you a peek into the innards of his mobile home, a real life 1977 Winnebago, which, from appearances, served as a de facto hangout for the cast on set.

“On Set With Andrew Lincoln”: The star and central figure, on a rare break from shooting, sits down with the cameras and talks about his character and the series in general.
Posted by Brent McKnight at 8:42 AM