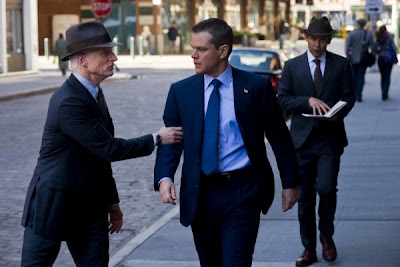 Spooky little dudes in fedoras secretly run the world. Didn’t know that, did you? At least if George Nolfi’s “The Adjustment Bureau”, and adaptation of a short story by Philip K. Dick, is to be believed. They may be angels; they’ve apparently been called a lot of things. But whatever else they may be, they are little more than mid-level bureaucrats, middle management suck ups who operate behind the scenes, subtly tweaking the destinies of the unsuspecting populous to make sure everything happens according to “the plan” written by “the Chairman”.


When bad boy political wunderkind David Norris (Matt Damon), fresh of tanking a New York senatorial election, largely because he mooned some bros at a college reunion (the New York Post publishes a picture), discovers these shady goings on, he is confronted with a decision. He can go on about his day to day business and pretend he saw nothing, or he can blab, in which case he will be “wiped”, which is exactly what it sounds like. They will erase his memory and personality, and everyone he knows will think he’s lost his marbles.

Though it contains elements of science fiction, metaphysical drama, noir, and political thriller, at its core “The Adjustment Bureau” is romance. David is destined to meet Elise (Emily Blunt) in that most obvious of places, an empty men’s room, so that she can inspire him to give a career defining concession speech. He is also destined never to see her again. That’s the plan anyway. When Harry (Anthony Mackie), David’s handler, or guardian angel, or whatever the hell he is, falls asleep on a park bench (hey, even Adjusters get sleepy), David happens across Elise on a bus. As you can imagine, everything goes wonky. No matter how hard Richardson (John Slattery) and the others try to keep them apart, David and Elise share an undeniable, unforgettable connection that neither can ignore. And perhaps most maddening, despite the plan, chance keeps throwing them together.

What keeps “The Adjustment Bureau” moving is the tension, but the tension doesn’t come from the most obvious sources. The conflict isn’t whether or not David and Elise will end up together, it isn’t whether or not David will get his brain zapped with one of those blinky “Men In Black” wands, or even whether or not the Adjusters will catch David when he goes off script. There are chase scenes, but first time director Nolfi stages them in a manner reminiscent of snappy caper movies (this is the man who wrote “Oceans Twelve”), rather than like a straight up action movie. These pursuits are more witty than action. The real tension springs from the choices presented to David. He can chose one way and end up with the girl. He can chose another and realize his lifelong dream. For him the choice seems clear. The only problem is that his choices not only impact his life, and his goals, but they impact Elise’s as well, and forever alter her destiny. David thinks he made the right call, but he constantly questions his choice. Is his fate really as written in stone? The more he bucks against his constraints, the more things start to go off the rails, until they have to call in the big guns, Thompson (Terrence Stamp), aka “The Hammer”. He’s the one who fixes things no one else can fix.

What is real, what is not, how can something that feels as right as David and Elise be wrong? What if the plan is wrong? That’s the underlying question of “The Adjustment Bureau”, what if God’s plan is wrong? It never asks this directly, or even overtly states this, but when all is said and done, that is the bottom line. The Adjusters blindly follow the plan, not because it is true, not even because they believe in it, but simply because it’s there in black and white. Do you really have free will, or just the appearance? Is the great and powerful OZ behind the curtain, orchestrating it all? Is your path already set, or is who you are the sum of the decisions you make? A subtle, prodding subversion motivates “The Adjustment Bureau”, but it is never quite as tense as it could be. You’re curious about how things will unfold, and you hope for the best, but even though there are serious concerns that everything might end badly for the protagonists, the situation never feels that dire. For a clandestine group that skulks in the shadows and wields an incredible deal of power, the bad guys are never as ominous or threatening as they could be. As earlier stated, they come across more as ineffectual administrators more than real villains. That adds an element of charm to the film, but also leaves a bit of a void.

Damon and Blunt are great together as the lovers willing to go up against any and all obstacles in front of them, including, but not limited to, God and his minions. They have an effortless chemistry, and a nice connection that makes them easy to root for. “The Adjustment Bureau” is visually interesting without it being intrusive or detracting from the central story. The hip comparison seems to be “Inception”, and the two films do share certain similarities, chiefly quirky visual craftsmanship and posing questions of what is and isn’t reality, and that sort of thing. But even more than “Inception”, an apt reference point is Alex Proyas’s “Dark City” (which never seems to get as much love as it should, that movie is awesome). “The Adjustment Bureau” is not nearly as dark, tense, or as expressionistic as that film, but thematically the two are closely linked by the idea of an entire world at work behind the scenes, pulling strings and rearranging lives.

“The Adjustment Bureau” isn’t a great movie, but honestly, it’s probably one of, if not the best big Hollywood movie that’s come out so far this year. One thing the film does do is it captures the feel of Philip K. Dick, at least in part. I haven’t read the specific story that it’s based on, but it bears many of the hallmarks of his work, including feelings of paranoia, a looming, faceless authority, religion, and the true nature of individual identity, among others.
Posted by Brent McKnight at 9:40 AM