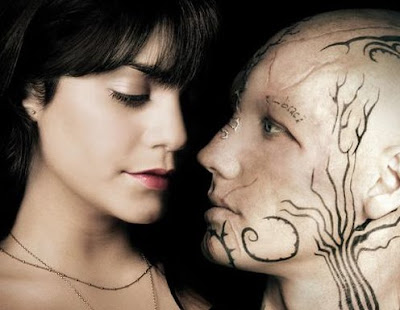 There are certain stories that are told and retold on screen, generation after generation. “Cinderella” is one, and “Romeo and Juliet” is another. “Beauty and the Beast” also belongs to this club. My personal favorite version is the Ron Perlman/Linda Hamilton TV joint from the mid 80s, but much of my generation is enamored with the animated Disney rendition, and has a special place set aside in their collective hearts for that film. Now I have love for Angela Lansbury, and who can forget Jerry Orbach (RIP), and who am I to tell an entire generation that they’re wrong, so I’ll chalk this up to individual preferences. I firmly believe that time will prove me right.


“Beastly” is the latest adaption of this classic story, and, much like Baz Luhrman’s “Romeo & Juliet”, it is all sorts of updated and hipped up for today’s youths. My initial reaction is that I am not the target audience for “Beastly”. That seems like a logical assumption, right? I’m bearded, crotchety, and covered in tattoos of various monsters. And perhaps most glaring, I am not a teenage girl. It stands to reason that a movie starring Vanessa Hudgens, and revolves around high school, is probably not directed at me. Seeing the line outside the screening only reaffirmed these suppositions. There was a great deal of texting and glitter. I was wearing an “Evil Dead” t-shirt with holes in the armpits. Then the movie started, and for a third time, I thought to myself, this movie is most definitely not aimed at me and my particular tastes, and I’m willing to bet, it was not made for you and yours either. That might be a bit of an assumption, I don’t know you from Adam, but it’s a working theory.

Here’s the kicker. I look vaguely homeless and frighten an astounding number of children who see me on the street, but I’m also apparently a huge, sappy, sissy baby, because I like “Beastly”. It’s dumb and obvious and cheesy and hackneyed and everything a good movie shouldn’t be, but it’s adorable. The Hudgens is adorable, the whole thing goddamned adorable. I feel like I need to go home and watch a Steven Seagal movie just to prove I’m still a man and that I’ve actually gone through puberty. Okay, I always feel like watching a Steven Seagal movie, but that’s beside the point.

When “Beastly” started I couldn’t help but think this is the stupidest thing I’ve ever seen. And it is. It’s not good. That fact should be crystal clear. However, somewhere in the middle I came to a horrifying, undeniable realization…I like “Beastly”.

You know the story. Of course you know the story, it’s “Beauty and the Beast”. Kyle (Alex Pettyfer) is pretty. And rich. And has the world by short and curlies. And he knows all of this. He rules the school and he says things like “Frankenskank”. One of the Olsen Twins (does it really matter which?) is a gothed out teenwitch who puts a curse on Kyle and he turns ugly. Like reject from a pre-fab-major-label-Slipknot-knockoff-band ugly. He’s got tribal looking tattoos on his face, big gashes on his neck (which seem to have flecks of glitter in them), and, gasp, he’s bald, and we all know bald people are ugly. He also has a tattoo of tree that changes with the seasons. When the tree blooms in spring, if no one has told him they love him despite his ugliness, he will be stuck ugly forever. Too bad he was such an ass that no one who knows him actually likes him.

Enter Lindy (the Hudgens). Right away you can tell she’s a good person because she helps the homeless and actually cares about the environment and stuff. She also a free spirit, who sings while wearing headphones, eats Jujyfruits with deli coffee, and her dad is a junkie, and you know she’s poor because her neighborhood is covered in graffiti. After Kyle gets all stalkery for a while, he saves Lindy from some thugs and convincers her dad that she’ll only be safe in the brownstone where Kyle’s news-anchor dad hides him from public view. So, he essentially keeps her captive in his castle. This time around Neil Patrick Harris and Lisa Gay Hamilton take the parts that belonged to singing kitchen implements in the Disney version. NPH plays a blind tutor who seems like he’s the only one in the movie who is in on the joke. His whole portrayal of a blind man is basically just walking around cross-eyed (and he still plays a mean game of darts). You can almost hear him not give a fuck, which is pretty entertaining. He’s full of wisdom like, “Chicks did blind guys”. LGH plays a Jamaican maid who is a target for Kyle’s early racism, but who, after he gets all ugly (look closely at his eyebrows, one of them actually spells out the word ‘suck’), he begins to care about. She gives him advise, like telling him to think about Lindy and what she likes instead of just buying her expensive baubles she hates. His response when paying attention to the like and dislikes of a romantic interest actually pays dividends is, “That thinking thing killed. Killed.”

The story is so contrived it’s almost physically painful. Everything is laughably bad, everything. There’s even an email/twitter/facebook montage. Seriously. I’m sure the Nickelodeon crowd will find this whole set up mind-blowingly deep and moving—of course Kyle learns some important life lessons in the end—but you know better. And so should I. But somewhere along the line, I found myself emotionally invested in this syrupy nonsense on the screen. My taste is questionable, I know this, and for the most part this is something I embrace, but “Beastly”? I’m legitimately upset, not to mention perplexed, that I really like “Beastly”. I don’t expect you to enjoy “Beastly”, hell, we’ve already established that I shouldn’t like it, but I do, so maybe you will, too, but I doubt it, you’re smarter than me. Maybe I am a teenage girl after all.
Posted by Brent McKnight at 9:13 AM

I like your writing... Despite the initial intimidation of this wall of text, I actually read the whole thing and giggled (quietly) a few times. Thanks for probably the most accurate of this movie. Im sure I got more enjoyment out of reading this than I would have actually watching the film.

The story line is amazing and it had potential to be an amazing movie, the acting was just so bad!!
I really wish i would have saved my thoughts from the previews for this one, because it didn't deliver.