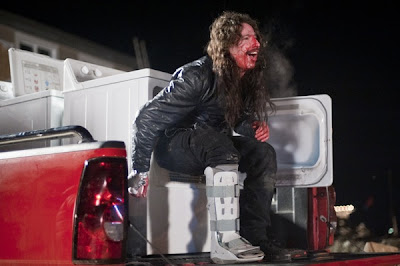 If you haven’t seen “Fubar” I only have one question for you. What the hell, man, are you serious? I’m not kidding around when I say these words, drop whatever you’re doing (and lets be honest, if you’re reading this, whatever you were doing wasn’t very important to begin with) and go rent it immediately. It’s one of those movies that as soon as I saw it for the first time I sat down everyone I encountered for the next week and forced them to watch it. And then they made everyone watch it, and they made everyone watch it, and it was like a giant pyramid scheme, only so, so good. One friend spent the entire movie gawking at the screen, giggling like a simple-minded idiot-boy, which in my book counts as glowing praise.


For those uninitiated viewers out there, “Fubar” is a mockumentary following Terry and Dean, a pair of Canadian heshers as they headbang, party, and generally kick-ass their way through life. Highlights include the lines “turn down the suck, turn up the good”, and “I suggest you take up another sport, like knitting”, and the epic poem/song, “Woman is a Danger Cat”. Why “Fubar” isn’t legendary and celebrated by a minor holiday remains a mystery to me. If there were any justice in the world it would be as revered and quoted as “The Big Lebowski”.

Well now Terry and Deaner are back, in “Fubar: Balls to the Wall”, a shockingly appropriate title. Five years after Dean lost a nut to testicular cancer, little has changed, and the movie dives right in to one rager of an eviction party. Tron (Andrew Sparacino) shows up to freestyle rap in the kitchen, there is a palate of beer (which Dean accosts sexually), and Dean, having swallowed a handful of LSD, descends into a full blown bad trip that climaxes in him crying, screaming, and worshiping a poster of Ronnie James Dio while wearing a jock strap with a burning candle stuffed down the front. Shit gets pretty real. The evening culminates with the house engulfed in flames, and Tron and Terry chainsawing through walls to save Dean, who by that point is a drooling, gibbering wreck. They don’t waste any time cranking things up a notch, that’s the good stuff right there.

After sobering up, and realizing that they’re running out of options (they now live in Terry’s car), the pair head north to Fort McMurray, Alberta, where Tron drunkenly promised them jobs working on an oil pipeline. Along the way they steal a hitchhiker’s weed then ditch him on the side of the road. Terry actually becomes a productive member of the work crew, but Dean “fucks the dog”, and spends most of his time pelvic thrusting a blowtorch and trying to scam workman’s comp.

In keeping with classic storytelling tradition, a woman comes between the lifelong friends when Terry begins seeing Trish (Terra Hazleton), the town doorknob (get it, because everybody gets a turn, hee hee, I amuse myself). Terry blows all of his money on his increasingly domestic lifestyle, and has less and less time for things like snowmobile hunting with Dean. (What could possibly go wrong with that?) But they still manage a sweet “at the mall” montage that features Dean hooting and hollering down a massive waterslide.

Though much of the dialogue in “Balls to the Wall” was improvised, it is way more staged than “Fubar”. Gone are the first-person mockumentary framework, as well as the scenes where cast and crew roam free and infiltrate groups of civilians, engaging them in impromptu, off the cuff mayhem. Watching real people on the street react to the lunatic antics of Dean and Terry is one of the true joys of the first film. You feel for these citizens because you’ve all encountered insane wingnuts on the street and been both wildly entertained, but also a little bit concerned about your physical well being.

“Balls to the Wall” is funny for the same reasons and the first movie, but it also shares the same weaknesses. When the story takes a serious turn, with cancer and Dean’s daughter and domestic issues all rearing their ugly heads, the momentum stumbles and the film falters. And while there are some memorable lines, like “A bow is a just way of murdering an animal”, and “We’ll feed the baby, they just eat crackers for the first six months”, “Balls to the Wall” lacks the instant quotability of the first.

None of this is to say that “Balls to the Wall” isn’t completely awesome, because it is. The movie is fucking hilarious, and is another thing you’ll force your friends to watch over and over. Fortunately the filmmakers know enough not to dwell too long in the melancholy doldrums, kicking things back into gear with a Christmastime robbery and rocking karaoke jam that includes a sweet rendition of “More Than a Feeling”. I’m not going to say that this is just as funny and the first, because it’s not. Then again, nothing else created by mere mortals is. “Balls to the Wall” is an admirable follow up to a film that I consider a modern classic, of course it will lose a little in comparison, but it holds up, and is funnier than anything else you were going to watch instead. Do yourself a favor, find “Fubar: Balls to the Wall” wherever you can, in a theater or on DVD, and get in there and fucking giv’r. Much like the original, this shit is pure gold.
Posted by Brent McKnight at 12:12 PM